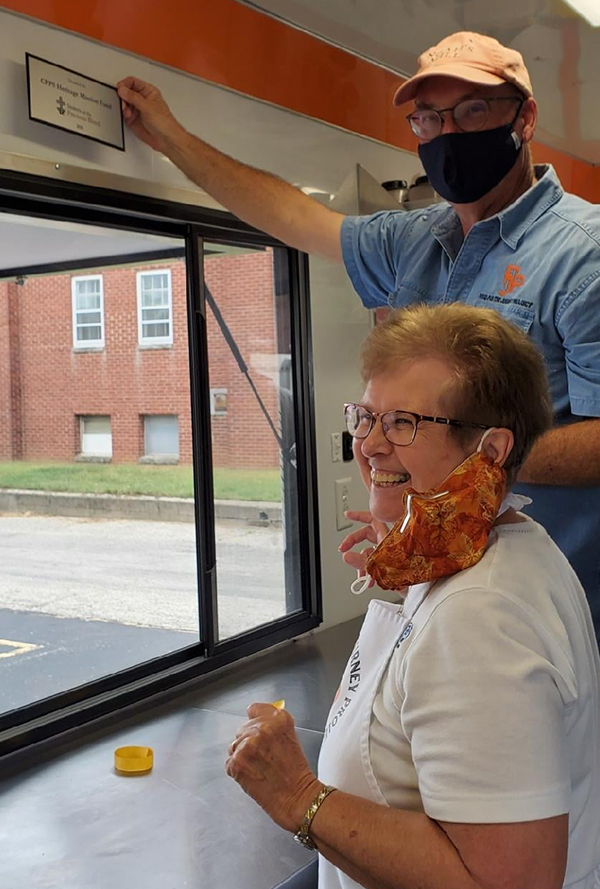 I enjoy golden opportunities to be a life-giving, reconciling presence in our fractured world through various volunteer ministries in the Dayton area.

For the past four years, I and three dedicated friends have assisted families arriving in the U.S. from Africa with refugee status. Many of these families are being placed in depressed areas of Dayton. The language barrier (they speak Swahili) is a constant challenge for our team. However, with various translators, we are able to support the families by providing food, clothing, beds, furniture and other basic necessities needed for daily living as they get settled. These services are made possible by the generous financial support of the Precious Blood Community. To relieve their suffering and make life a little more bearable for parents and their children has been the most gratifying, revealing, challenging and rewarding ministry for me. I feel blessed and privileged to be of service to those who ask for so little but yet need so much.

With constant support and encouragement from the Precious Blood Community, another gratifying ministry has been Food for the Journey Project (FJP). This is a nonprofit organization that serves free, hot nutritious meals to families, the elderly, the isolated and marginalized in the Dayton area. In addition to food, personal hygiene items, socks and other small supplies are also provided. Read More

Grateful for the financial support of our Precious Blood Community, FJP expanded their services to those in need by securing funds from the CPPS Heritage Mission Fund to build a mobile kitchen trailer. The trailer now serves at multiple sites throughout the Dayton area, offering food and dignity to the families and elderly that are isolated and unable to reach local food centers. Along with developing new friendships, preparing and serving meals to the needy and the homeless has given me the opportunity to be a compassionate presence to the less fortunate in our city.

Although the pandemic has curtailed some of our events, I continue to pray for all those in need of assistance, and I am anxious to get back to a full schedule of volunteer activities! I am so thankful for God’s incredible graces that support us daily. 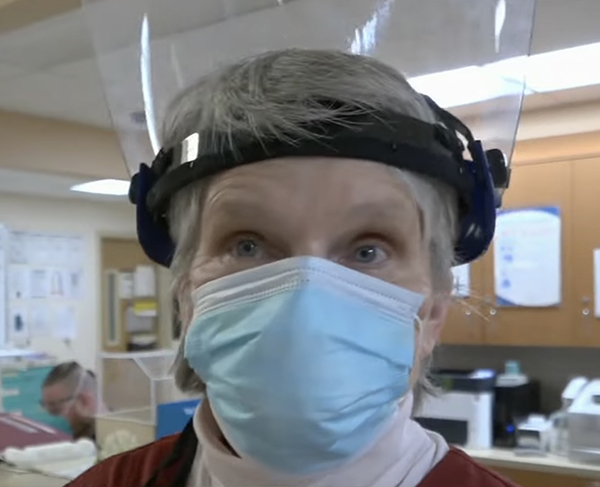 Sister Terry Maher and St. Mary Medical Center in Apple Valley, California, appeared in the January issue of This Good Work after the hospital was featured in national news reports for the extraordinary number of COVID cases there.

In addition to the news outlets mentioned in that article, Sister Terry’s ministry was also featured in a report by CBS This Morning. To date, over 2,600 people have died of COVID in San Bernardino County, where St. Mary Medical Center is located.

More recently, a report in the Daily Press (Victorville, California) highlighted a signal of hope: the removal of the triage tent that had been erected in the hospital parking lot. Read More

The Sisters of the Precious Blood continue to pray for health, healing and peace for all affected by the pandemic. 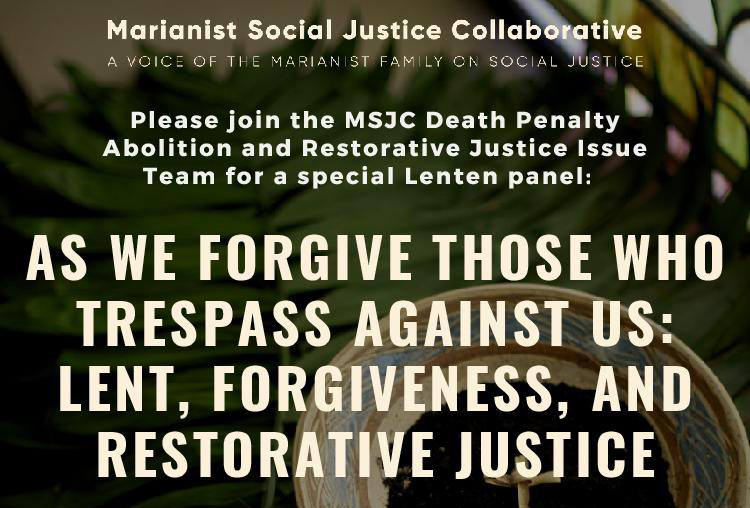 Sister Donna works with mothers who have lost children to violence or incarceration and is a part of the Precious Blood Ministry of Reconciliation team in Chicago. Panelists also include: Read More

You may register for this event online. 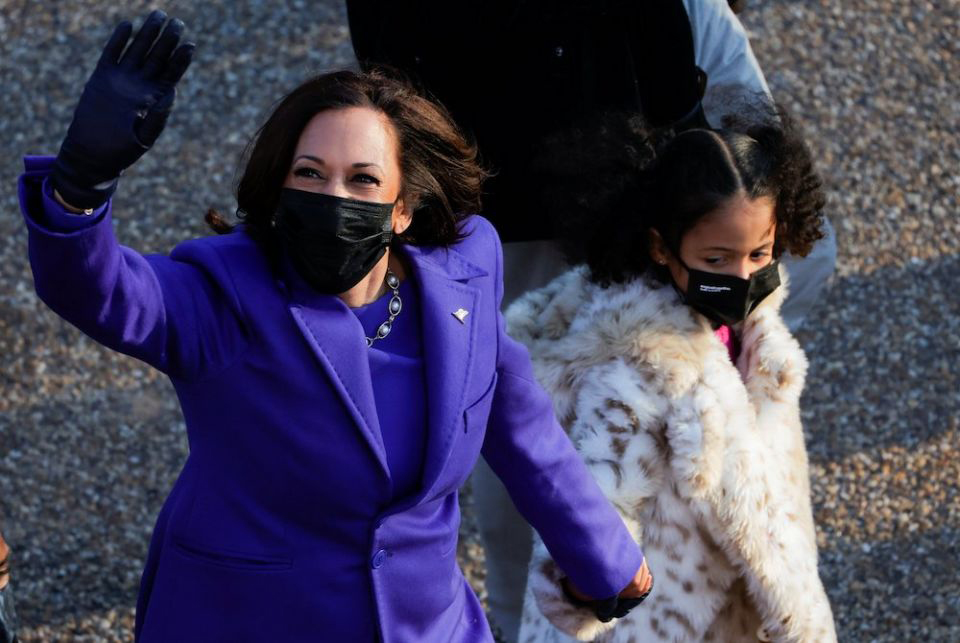 Global Sisters Report recently published an article titled “The battle is far from over for justice, truth in America” by Sister Mumbi Kigutha.

Reflecting on Inauguration Day, Sister Mumbi writes, “Inaugural poet Amanda Gorman proclaimed, ‘Scripture tells us to envision that everyone shall sit under their own vine and fig tree, and no one shall make them afraid.’ Still, it is very hard — almost impossible — for me to imagine a United States in which I will not be afraid. I know I am not alone as I say this; many Black, Brown and Indigenous folks would echo this sentiment.” Read More

Sister Mumbi ministers in Chicago as a part-time international consultant for Jesuit Refugee Service in the reconciliation and social cohesion department. 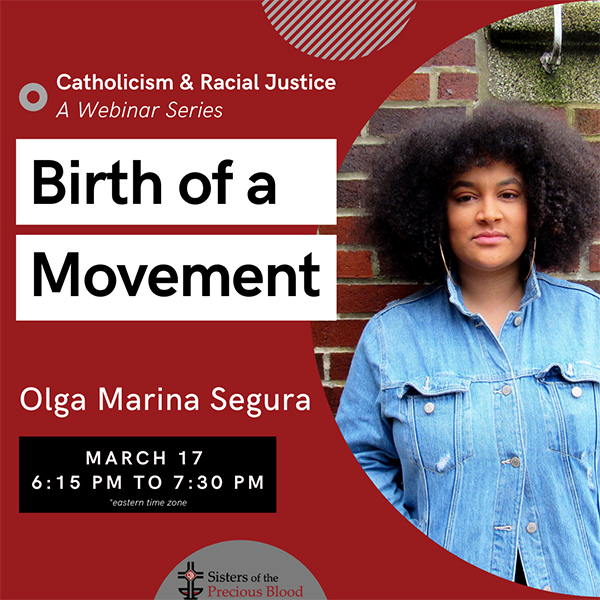 Join the Sisters of the Precious Blood at 6:15 p.m. ET, March 17, as we begin a webinar series titled “Catholicism and Racial Justice.” The first webinar in the series features Olga Segura, a freelance writer and the opinion editor at National Catholic Reporter. She is the author of Birth of A Movement: Black Lives Matter and the Catholic Church. Previously, she was an associate editor at America Media and is a co-founder and former co-host of the podcast Jesuitical.

Racism continues to afflict every sector of our society every single day, as we continue to see from various narratives and testimonies from around the nation and the world. We are committed to continuing to explore ways in which we as a Congregation can mainstream an anti-racism stance into our everyday lives while also encouraging others to do the same.

With the Catholicism and Racial Justice webinar series, produced by the Congregation’s Racial Reconciliation Working Group and Office of Peace, Justice and Ecology, we strive to continue to educate ourselves and others while also raising awareness by featuring the voices of various activists and advocates of anti-racism.