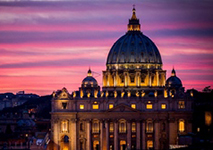 In 2016, April 11-13, 80 Catholic peacemakers from over 25 nations were invited to the Vatican for a conference to discuss formally abandoning the so-called “just war theory” and to return the Church to the nonviolence of Jesus. This was the first-ever gathering of its kind in Church history. This is the first time the Vatican has ever co-sponsored with Pax Christi a conversation on nonviolence.

Three days of deliberation took place and the statement, called “An Appeal to the Catholic Church to Re-Commit to the Centrality of Gospel Nonviolence” was affirmed by the participants of the Nonviolence and Just Peace gathering.

The message of Pope Francis for the celebration of the 50th World Day of Peace, January 1, 2017, was named “Nonviolence: A Style of Politics for Peace.” It encourages us to acknowledge one another as sacred gifts endowed with great dignity, and calls us to make “active nonviolence our way of life.” What am I doing???