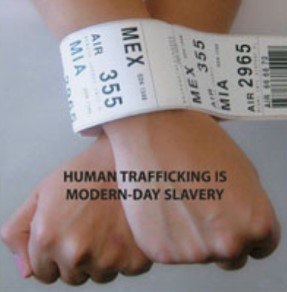 The Sisters of the Precious Blood co-sponsored an anti-human trafficking event — “S.O.A.P. UP the First Four” — at Chaminade Julienne High School (CJ) in Dayton on Saturday, March 10, along with Abolition Ohio, CJ, the University of Dayton (UD) and S.O.A.P. (Save our Adolescents from Prostitution).

Over 60 students and adults participated in the event, the purpose of which was to educate and to provide materials for area hotel staff on human trafficking. This was done prior to the increase in out-of-town visitors to Dayton for the NCAA First Four basketball tournament on March 13 and 14.

Colleen Kammer and Sisters Regina Albers, Marita Beumer, Ann Clark, Joan DeChristopher, Patty Kremer and Ceil Taphorn assembled packets of information. Sister Marita and Colleen delivered the packets to the hotels along with bars of soap that were labeled with the national trafficking help number.

The event energized two UD students who will co-coordinate a Dayton S.O.A.P. chapter, whereby they will train volunteers for outreach and organize S.O.A.P. activities to provide an avenue to freedom for the enslaved young people in the Dayton area.

Assembly Directive: Network with other individuals, agencies, and groups to be effective in our current reality.