Enjoy the rich, loving and compassionate diversity of Dayton 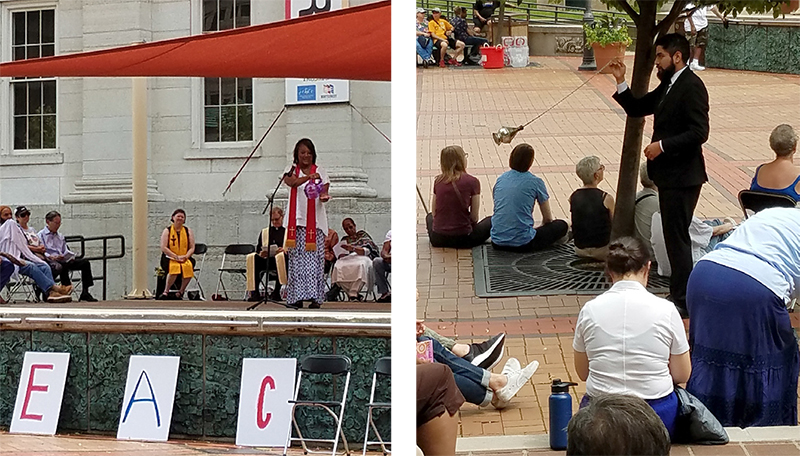 This was the title of a three day Community Celebration sponsored by the Dayton unit NAACP. A NAACP representative stated that its organization is for everybody and anyone can join to help promote equality for all. Its mission is to “ensure the political, educational, social and economic quality of rights for all persons, and to eliminate racial hatred and racial discrimination.”

The intention of these three events was to bring people together to avoid giving attention to the KKK who held a rally on May 25 on Dayton Courthouse Square. The organizers wanted to show the KKK that Dayton unites under the banner of  love and compassion. Hate has no place in Dayton and “it can go back to Indiana from where it came.”

The first event was an Evening Discussion on Race Relations at the Dayton Art Institute May 23.

The second event on May 25 was held at McIntosh Park –  An Afternoon of  Love, Unity, Peace and Inclusion. Sisters Cecilia Taphorn, Jeanette Buehler and Judy Niday attended. Mayor Nan Whaley  stated: “Dayton is still too segregated and still too unequal. This is unacceptable and something we must keep focused on to change every single day.” Later she said “This ugly chapter is over, but it means we have to get back to the real work – making sure that no matter what you look like, where you come from, or who you love, that you can have a great life here in Dayton.” She was happy to see so many people show up to celebrate love, unity and peace and support love and diversity over the KKK that appeared at the same time at Courthouse Square across the river.

The culminating event was held Sunday afternoon May 26 – Love Trumps Hate – Cleansing of the Square at the Courthouse Square. Religious leaders from many traditions shared symbols and meaning of cleansing rituals such as water, incense, flowers, smudging, etc. Guy Jones, a Native American Indian, stated that “we are searching for answers to humanity’s issues but we don’t know the questions to ask.” Sister Judy Niday attended and shared these pictures.

Assembly Directive: Stand with the marginalized, make a collective commitment to promote and witness nonviolence, and strive to effect reconciliation among God’s people.