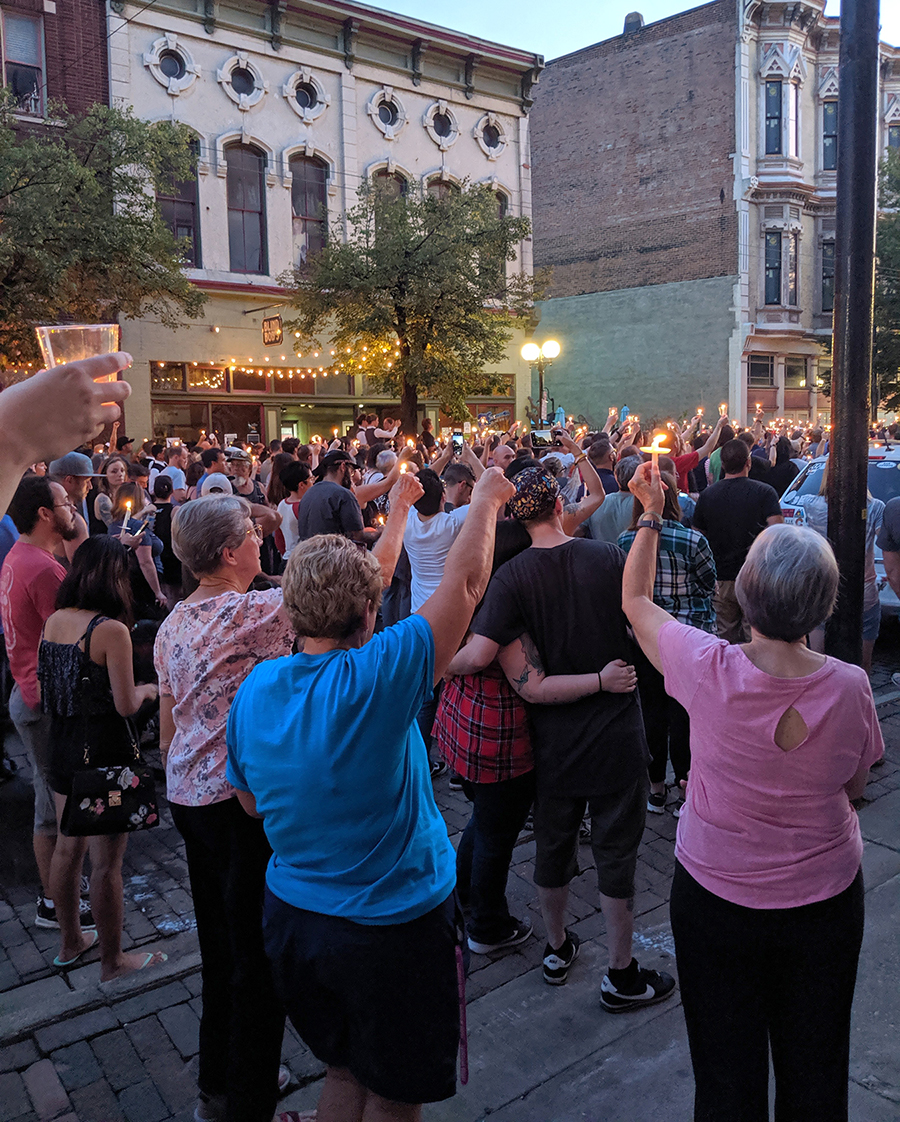 In May, in the wake of mass shootings in New York and Texas, the Sisters of the Precious Blood issued a statement condemning gun violence and white supremacist violence and hatred. We continue to pray for victims of gun violence and their families, and we are asking our legislators to take a courageous and vocal stand by supporting red flag laws, universal background checks for all gun purchases, restriction of civilian access to assault weapons and high-capacity magazines, improved access to mental health care and other services for those in need, and funds for programs that dismantle racism and all propaganda of hate.

The Congregation released the following statement on May 25:

The Sisters of the Precious Blood stand in prayer and solidarity with all who have lost loved ones to gun violence.

In response to Buffalo’s mass shooting on May 14, we denounce white supremacist violence and hatred, and we stand with the Leadership Conference of Women Religious as they assert: “In the wake of the horror of Buffalo, we rededicate ourselves to LCWR’s commitment to dismantle systemic racism and white privilege and effect transformative change in our hearts, our organization, and our society and we pledge anew to build God’s beloved community.” Read More

The full statement from LCWR is available here.

In response to the mass shooting in Uvalde, Texas, on May 24, the gunman’s motive remained unknown at the time this statement was written. But regardless of the motive, we Sisters of the Precious Blood refuse to accept gun violence in any form as a normal and accepted part of our society.

As we recall the experience of our local area with the mass shooting in Dayton’s Oregon District in 2019 — when hatred took nine lives, and the lives of countless others were forever changed by grief and loss — we continue to mourn with all who have lost loved ones to gun violence, whether during a mass shooting or in the individual acts of violence that occur each day.

The Sisters of the Precious Blood remain committed to taking action to dismantle racism and work for peace as we continue our mission to be a reconciling, life-giving presence in our fractured world.

Photo in slider above, homicide vigil in the Five Oaks neighborhood of Dayton, Ohio, in 2019; contributed photo. Photo at right, Sisters Madonna Ratermann, Patty Kremer and Margo Young at the vigil in the Oregon District, Dayton; Sister Ann Clark photo. 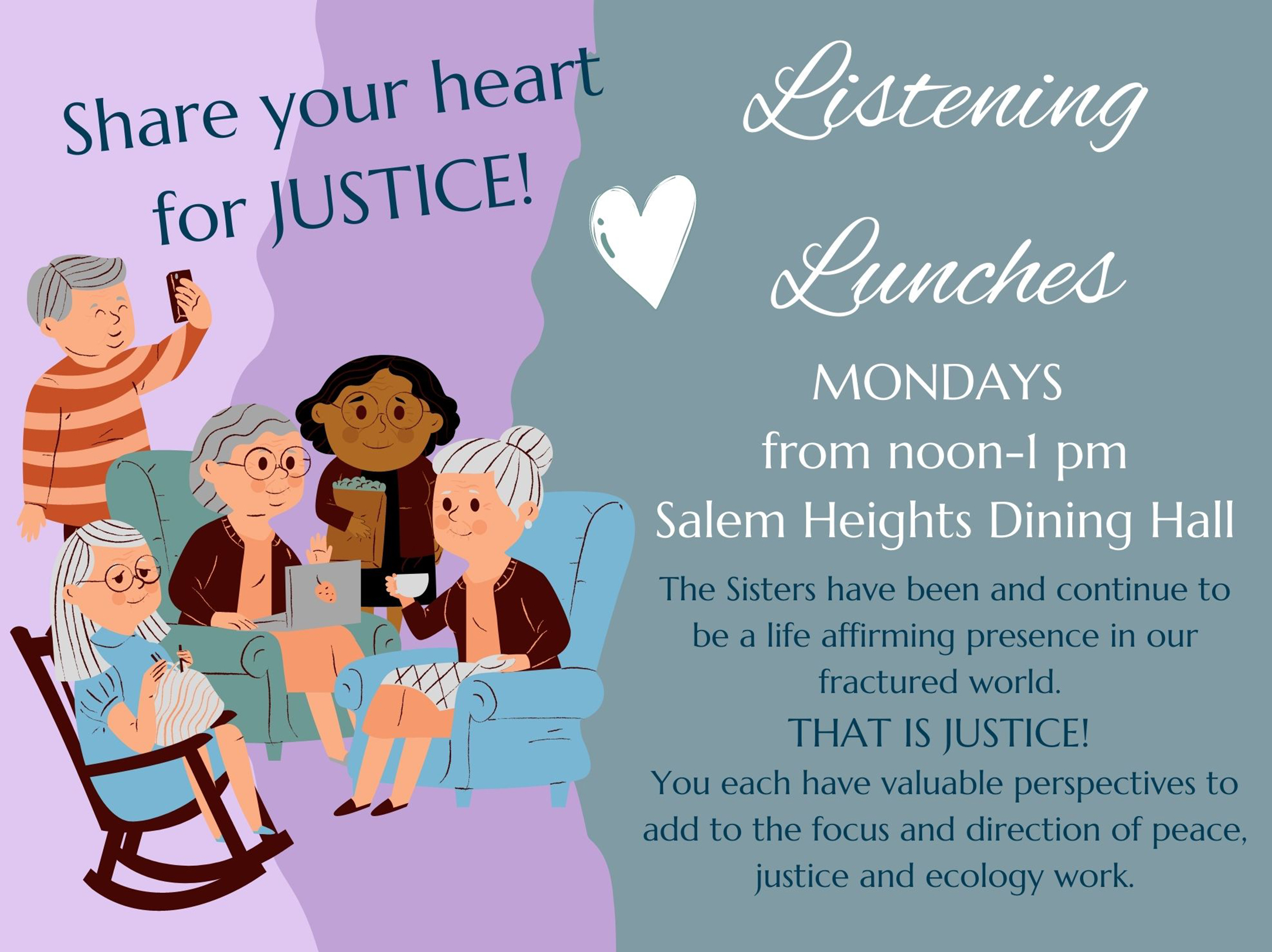 By Jen Morin-Williamson
Peace, Justice and Ecology Coordinator
The Sisters of the Precious Blood have a long legacy of working toward peace, justice and care for creation. Prior to COVID, the Council had established a Justice Committee to focus on educational and action opportunities for the Sisters within the Congregation’s 2019-23 Directives. In my role as peace, justice and ecology coordinator, I had the privilege of regathering this committee per Council’s direction. I read through the archives of This Good Work and Grassroots to deepen my understanding of the Sisters’ advocacy, and I began inviting Sisters who had been involved in the past. (However, this is an open committee, and all Sisters are welcome to participate in our meetings twice a month!) As we began meeting in February, it became apparent that it would be helpful to focus the committee’s work to have a mission statement. After much robust discussion, and by approval of Council, the Justice Committee’s mission statement was created: Read More

The members of the Justice Committee of the Sisters of the Precious Blood focus attention and energy on justice issues affirmed by the Sisters in Assembly Directive Statements or from the Community Council. Members raise awareness about other justice issues for which Sisters and their supporters can be advocates. The committee endeavors to challenge Sisters and those joining with them to think, judge, and act for the common good in light of Catholic Social Teachings. The Justice Committee is chaired by the Congregation’s Coordinator of Peace, Justice, and Ecology.

The very first initiative of the Justice Committee was called “Listening Lunches.” This was a casual opportunity for me and one Sister to listen to other Sisters about their thoughts on justice issues. Again, I was humbled by the depth of concern for the many injustices in the world and the ways that the work of the Sisters had responded to them – and continue to respond to them. I especially appreciate the important ministry of presence and prayer.

As well, the Justice Committee has hosted a few initiatives such as viewing the movie My Octopus Teacher together, followed by a discussion on learning from nature and educating the Sisters at Salem Heights about liquidless laundry detergent alternatives. We endeavor to provide many regular opportunities to challenge Sisters and those joining with them to think, judge and act for the Common Good. 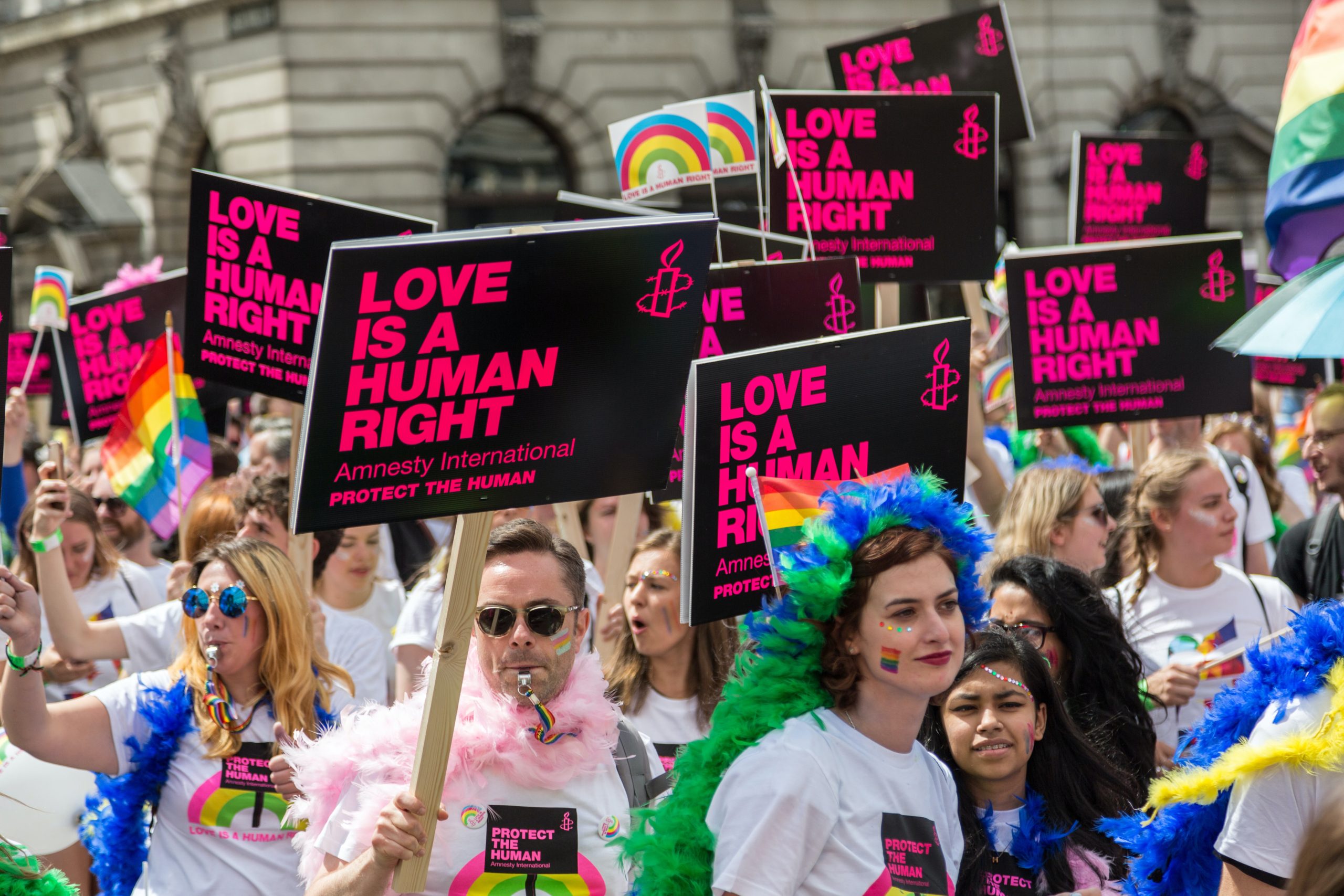 Why is Pride Month important to Catholics?

By Jen Morin-Williamson
Peace, Justice and Ecology Coordinator
As June has ended, you may have heard a lot about Pride Month, which occurs during June every year. Pride Month celebrates people who identify as LGBTQ+ and their allies. Originally, the Pride movement grew from a remembrance of the Stonewall uprising in June 1969, which is considered the beginning of the gay rights movement. Read More

I wanted to share just a bit in case you were wondering why Pride Month is important for us as Catholics. When we look at how Jesus lived and what He said, we cannot miss His message of love and reconciliation. That message was radical at the time, and it still is today! Jesus loved people first. He especially sought out marginalized people who have suffered physical, emotional and religious abuse because of their identities. Jesus wanted to share the Good News that God loves everyone regardless of how their community perceives them. Accepting that love, marginalized individuals could be reconciled into the community.

I know countless people who identify as Catholic people of faith and as LGBTQ+ people. These identities are not just how they view themselves, but rather how they understand God made them. To deny anyone part of their identity feels like denying the inherent dignity with which God made them, which is in God’s own image.

I am often asked about the letters LGBTQIA+ – what do they mean, and why are there so many?  LGBTQIA+ is an acronym meaning Lesbian, Gay, Bisexual, Transgender, Queer, Intersex and Asexual. There are so many because people are trying to put a single word to one aspect of their complex identity. And the “+” refers to newer ways to think about identity like pansexual, cis-gender, gender-fluid or nonbinary. Currently people who identify as LGBTQIA+ and their allies often use the term “queer” as well. If you’d like to learn more, please check out these links:

This way of thinking about the Catholic Church and how we can be inclusive of the queer community can be uncomfortable for some. But we always reflect Jesus when we choose love over judgment and exclusion.

Photo in slider above by Mercedes Mehling on Unsplash; photo at right by Ian Taylor on Unsplash 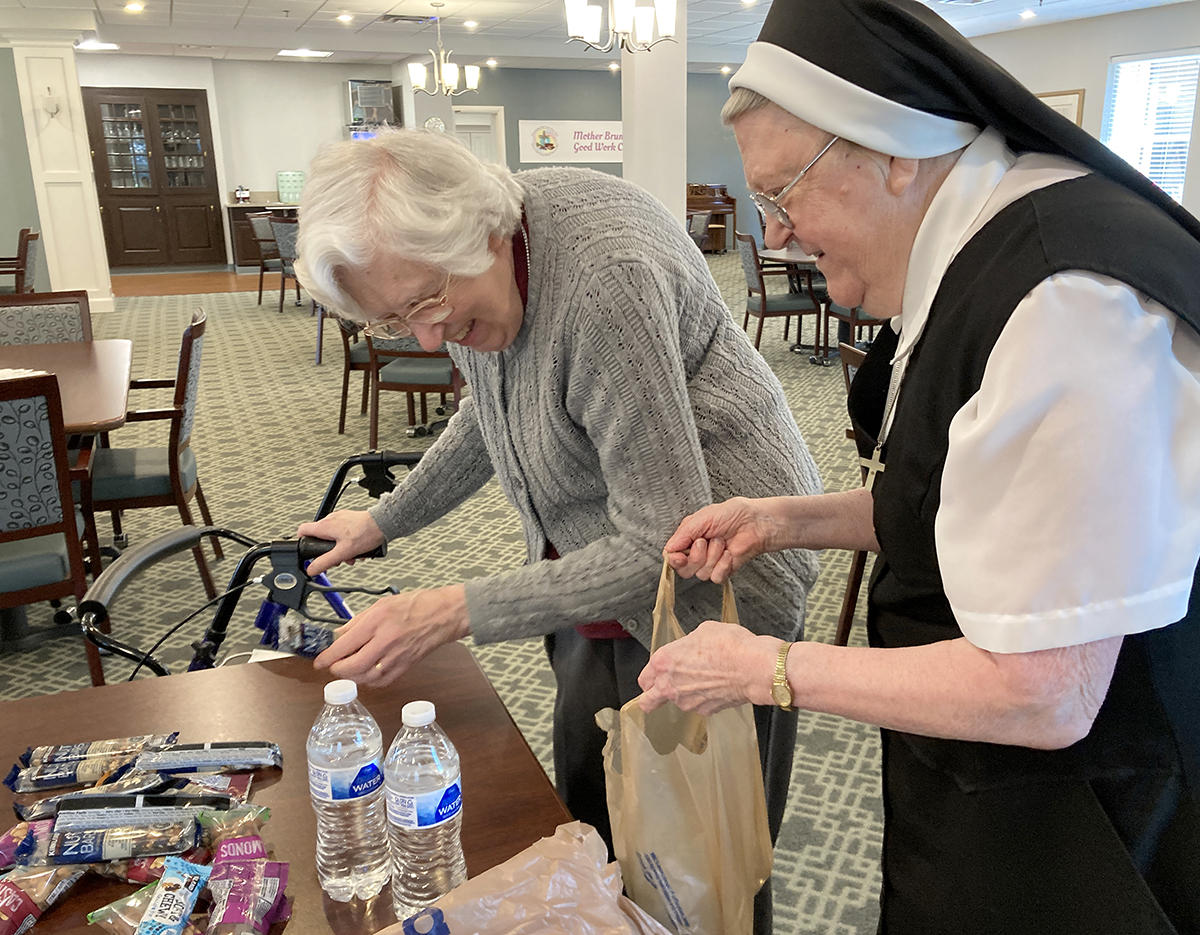 By Jen Morin-Williamson
Peace, Justice and Ecology Coordinator
We drive by. We walk past. We are uncomfortable and try not to make eye contact. But we see “them.” We are not even sure what to call “them.” We want to show that we acknowledge their dignity and that some names may not reflect that. The name may seem demeaning, or it may not be accurate at all. But still we try. We call them “the poor,” “people experiencing homelessness,” “people with mental illness or addiction.” In some places, the term “street people” may seem more appropriate. We are not trying to assess their situation; rather, we want to have some way to indicate how we have interacted with them – on the street. Many are holding up signs or asking for money. As Catholic Christians, we feel compelled to respond. Scripture is full of exhortations to care for the poor (Proverbs 19:17, Hebrews 13:16, Deuteronomy 15:7-1, Luke 6:38). However, we are skeptical. We do not want to enable addictions. So what can we do? Read More

The Sisters at Salem Heights packed plastic grocery bags with bottles of water and a healthy and a tasty snack, along with a printed “street card” and a couple of prayers. The street card is a resource provided by Montgomery County that gives a plethora of information about where folks can get assistance with food, shelter, mental health aid, domestic violence support, job assistance and much more. These bags were given out to Sisters and employees who wanted them. Many will keep a couple of street bags in their car and then when they pass a street person, they can hand them a bag. If folks feel unsafe doing this, small cards were distributed with phone numbers to call to report seeing someone who may need assistance in Montgomery County.

By Sister Mary Garascia, C.PP.S.
Care for “our endangered earth” is in our Congregation’s second Assembly directive. If, like me, you would like to read something about ecology without being overwhelmed by lots of statistics and technical information, consider Pastoral Song by James Rebanks. It’s the story of three generations of family farmers in England. The story is told in charming descriptive language. It lays bare a central conundrum farmers face. They farmers are asked to provide product as much as possible from their lands in order to feed a hungry world. But in doing so, great damage is done to the soil and the earth itself.

The story begins in the mid-20th century when small family farms with mixed farming were common in Britain. This period seems to the author to be “backwards” as he matures from a boy into adulthood. Then more “American” methods begin to be adopted, with increased use of fertilizers and pesticides, the enlarging and flattening of fields, specialization in one crop, etc. But Rebanks and his father notice changes, including the disappearance of birds. They work with government programs to begin to reverse course, for “a farm is a once-wild place that was tamed for our purposes,” part of an ecosystem that too often becomes broken or impoverished. He notes that farmers must rely on the shopping and voting choices of the rest of us, and he invites readers to participate in nature-friendly, sustainable agriculture through their choices and votes. The title comes from a moment when he gazes out on his land and hears the “music of this valley” where “buttercups bend their heads down in submission to the night” and “dandelions are bedraggled with dew.”

Photo in slider above by Ariana Prestes on Unsplash