Laura, a college-age Dayton parishioner who arrived in the United States from Mexico as a 4-year-old child, shared her personal story of living with the uncertainty of deportation with 30 of our Sisters at Salem Heights on December 12.

She is registered in the United States under the Deferred Action for Childhood Arrivals (DACA). Laura attends college on a full academic scholarship, and she does not receive any government assistance. She tearfully relayed her ambition of becoming a doctor, because she is fearful that her scholarship will be revoked — or worse, that she will be deported to Mexico, a country that she does not know.

Laura and some 800,000 individuals who are registered under DACA are awaiting the passage of legislation to grant them permanent legal status in the U.S., as the presidential administration seeks to end their residency protection. The Sisters signed letters to their congressional representatives, which contributed to the total of 18,000 letters that were generated for the Archdiocese of Cincinnati’s “Letters for DREAMers Campaign” at the end of 2017.

Prior to Laura’s story, Pam Long, now the former regional director of the Catholic Social Action Office, gave an overview of migration and what our Catholic social teaching requires of us in responding to the needs of immigrants and refugees.

The series continued with two documentary films by Father Dan Groody, CSC, associate professor of theology and global affairs at the University of Notre Dame, and an award-winning author and film producer. Dying to Live: A Migrant’s Journey and One Border, One Body: Immigration and the Eucharist were shown in January and February to the Sisters at Salem Heights.

Small and large group discussion occurred on topics such as finding God in the “other,” the parallels of the Way of the Cross to the migration experience and our call to participate in the transformation of the Eucharist in understanding and responding to the pain and suffering of migrants today.

Lastly, on February 26, many Sisters participated in a national Catholic “call-in day” to Congress to express support for DACA recipients. If you have not done so, please call your senators and representative to lend your voice in support of these vulnerable people.

The theme of the World Day of Peace, January 1, was Migrants and Refugees: Men and Women in Search of Peace. In his message, Pope Francis asked us to “turn a contemplative gaze” toward our migrant and refugee brothers and sisters, recognizing that we are all part of one family and that all people have the right to a life of peace and dignity, as well as a right to share in the resources of our common home.

He further added, “We must also turn this contemplative gaze to the cities where we live, a gaze of faith which sees God dwelling in their houses, in their streets and squares, fostering solidarity, fraternity, and the desire for goodness, truth and justice — in other words, fulfilling the promise of peace.” 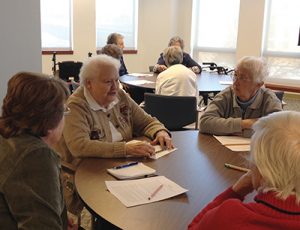