At a June 4 prayer vigil held at St. Barnabas Parish in Chicago, Sister Mumbi Kigutha delivered remarks on the murder of George Floyd and the civil unrest taking place across the country:

Should I even be standing here before you at this time? Are my words going to make any difference? We have become cynical because we know that society, that Christians, continue to turn a blind eye to the pain of black people. Should this space I’m taking up, this platform be occupied by somebody else? Perhaps, any of the young men, women, and mothers who come through the doors at the Precious Blood Ministry of Reconciliation each day; the many women, young and old, that I have met at the Cook County Jail on California Avenue, who can — and have — told endless stories of police brutality. But they have been met with skepticism or — even worse — indifference, because their audience is usually made up of their neighbors and friends who have their own similar, if not more horrifying, stories to tell of the same.

And yes, I believe that we shouldn’t paint the entire police force with the same tar brush, but isn’t that what has been done to the black community? What we are witnessing now is a result of different segments of society creating a narrative about some of God’s children. Of the media, politicians and various experts, medical and otherwise, who for a long time have kept planting seeds in our minds, the fruit of which is the lens through which we view black people and black bodies.

We believe that black men have brutal strength, that they are naturally aggressive and have criminal instincts, resulting in all of us, and I mean all of us, holding our bags a little tighter when in certain neighborhoods, crossing the street when we see them walking towards us, and God forbid if they are wearing a hoodie. We have been told that black women are loud and lazy and angry, resulting in them being denied prompt medical attention when they need it, which in turn has led to them having the highest mortality rate at childbirth. We have hypersexualized black girls’ bodies and labelled all black boys as gang members. Our language itself around black people is different: We use “aggressive” instead of “assertive”; “loud” instead of “passionate”; “riots” instead of “protests.” But most of all, we have been taught that black people are inferior, that they are content with less, that they do not deserve to want and have nice things, that they exist for and at the pleasure of the white populace.

So, as we were coming to the end of a long period of intense pressure due to the multiple burdens of the pandemic — burdens that I might point out have been disproportionately higher on black and brown people — we see Ahmaud Arbery hunted down and killed in Georgia. We hear of Breonna Taylor shot in her house in Louisville, Kentucky. We soon after witness Amy Cooper in Central Park weaponize her white privilege, despite being in the wrong, against a black man.

On May 25th, the video of the gruesome murder of George Floyd in Minneapolis goes viral.

A man lying on the ground, held down by three police officers while handcuffed. An officer, readjusting his knee severely on George’s neck with his hands casually stuffed in his pockets. George calling out for his mama, saying: “I CAN’T BREATHE!!!” That acted like the match to the tinderbox. Just like COVID-19 revealed that we had been living in cardboard boxes in regard to our health care system, the protests laid bare that racism and anti-blackness is woven into the very fabric of American society and that of the entire world.

We have all had front row seats to the protests and the violence that have ensued. Why now, we ask? What about him triggered such a response? Yes, this is about George Floyd, but it’s also about 400 years of constant abuse, marginalization and sidelining. It is about applying different standards to one demographic of the population over another. It is about systemic, structural and individual plundering and looting of black bodies, black labor, black expression and black rights.

Yet I’m told, we’re told, that this is not the way. That this is not the way to address racism and anti-blackness. Please tell me, please tell my sisters and brothers, tell us how should we address it? Because dialogue hasn’t done it. Dressing “proper” hasn’t either. Nor has accumulating several degrees, speaking multiple languages, living in the “right” neighborhoods. Wiping all traces of Ebonics or accents from our speech has also failed to do the trick. Using plain, good ol’ English and European names, like Anne and Mary and Peter and Henry, in lieu of our more personalized and unique ones — nope, that hasn’t worked either.

Protests are the language of the oppressed. This very country is founded on a long line of protests. When you deprive people of their rights as those created in the image and likeness of God; when you cut them off at their knees whenever they try to improve their lives; when you remove or undersupply resources and infrastructure to certain neighborhoods for decades, then later start gentrifying them and forcing entire communities out; when black culture and creativity is appropriated and stolen and sold without acknowledgement and benefits flowing back to the creators; when you deny black people dignity and equality . . . true and lasting peace will never be attained. Peace requires justice just as it requires truth and mercy. However, what has always been demanded and assumed of the black community is mercy for their oppressors. I mean, even Jesus and his message have been appropriated. Look at our representations of Jesus in our spaces of worship (blond and blue-eyed); look at how the Bible has and continues to be used to justify atrocities against black and brown people. The Bible has even become a prop to score political points.

American exceptionalism is a lie, because it is founded on white supremacy and through the subjugating of black and brown bodies, not just on this continent but around the world. No human being is created superior.

How can we bemoan the looting in our cities when perceived threats to America from foreign powers or peoples results in entire cities and countries being bombed, occupied and looted for years on end? How can we allow our neighbors in Englewood [a neighborhood on the south side of Chicago] to go hungry as grocery stores pack up and leave or high-end/out-of-reach grocery stores set up shop there? How can we stand by as the children next door fall behind in their education with each passing day due to a lack of resources, yet there are school districts operating at a surplus in this same city?

How can we allow modern-day slavery in the form of the criminal justice system to continue, yet none of it has translated into a safer country nor city, and instead has made some people extremely rich? How can we support marijuana legislation to pass while jails and prisons are still filled with black and brown bodies who were convicted for possessing the same? How can we send busloads to Washington each year for a pro-life march, to then demean, brutalize and kill those lives a few years later?

Until we realize as baptized Christians, as Catholics, that we are truly our sisters’ and brothers’ keepers and that our salvation is dependent on their well-being, too; that we to whom much has been given, much is expected and demanded; that all (brown, black and white) are created equal; until we make a resolution to address our histories, as individuals, families, church communities and the society facing up to our complicity in this grave sin; until we do the work to uproot our own biases and prejudices and make a commitment to using our resources to start undoing the harm; until then . . . I truly fear that our souls are in grave moral peril.

We have all looked back at terrible events in the history of the world, and most of us, if not all of us, have imagined ourselves as actively resisting the oppressors and standing up for the victims. History continues to write itself, and now is the time to make a choice. How will you be remembered?

Sister Mumbi Kigutha works as a consultant for Jesuit Refugee Service and holds an M.A. in Justice Ministry from Catholic Theological Union. She was featured in America magazine on June 1 in the article “‘The ink has run dry on writing statements.’ Black Catholics call for action in wake of George Floyd’s killing.” 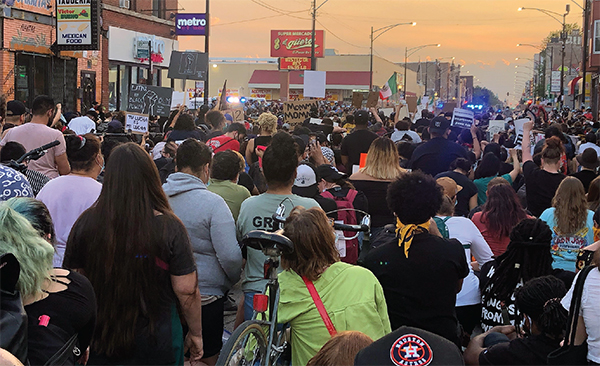