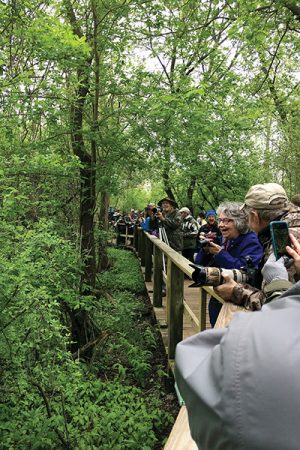 At a recent gathering of tens of thousands of people in northwest Ohio, I felt utter peace. Elements of the physical setting weren’t necessarily conducive to this state of mind — hundreds of people confined to a small space, standing on one’s feet for hours on end, limited restroom facilities, cold temperatures, rain and wind — but nonetheless, people experienced camaraderie, wonderment and tranquility.

The Biggest Week in American Birding festival draws 60,000 people to some of the best spring birding that North America has to offer. Over a 10-day period, bird-watchers from all over the world come to this hot spot to view feathered migrants, especially neotropical wood warblers. These very colorful, tiny birds, weighing no more than a few paper clips, travel from wintering grounds in South and Central America to their breeding grounds in the boreal forests of Canada.

The best area to view these birds is on a boardwalk that runs through a 13-acre woodlot on the shore of Lake Erie, east of Toledo. People who are crammed on the boardwalk manage to brush past each other quietly, inching their way down the one-mile tract, without an irritated glance or an unkind word spoken. Though the birders are intent on adding birds to their “life checklist” or seeing the more than 30 species of warblers and the other birds that come to Ohio each year, a spirit of helpfulness and respect pervades the boardwalk among this community of like-minded people.

“I can’t find the bird” one woman uttered aloud, as she scoured the greenery through her binoculars. A man next to her interrupted his viewing of the flame-orange-throated Blackburnian Warbler to painstakingly describe the location of the single branch, among more than a dozen trees, that the little bird was hopping around on.

At another juncture, a seemingly impossible parting of the crowd occurred when Bob, a man who is a fixture on the boardwalk each year, inched his way through the assembly on his motored scooter. Instead of annoyance, there were handshakes, greetings and love for the man who spends time helping novices identify the birds.

On one day when the cold and the winds drove the birds down from the high treetops to forage for insects at eye level, audible expressions of joy and awe were proclaimed en masse. The energy of the people was positive, focused and uplifting.

The phenomenon of bird migration in this area is a means for a different but remarkable ecological, humanitarian and spiritual experience for thousands of people each year. It demonstrates how a temporary but peaceful community of people can be formed through the power of attitude, common goals and respect.

I contrasted this occurrence in Ohio to my experience of being in the Church of the Holy Sepulcher in Jerusalem years ago. Though the subject that people were focusing on was different in these two places, the elements of large crowds and limited facilities also existed in the church — minus the cold and the rain, of course. But the outcome? Well, it was less than peaceful.

In the church, our group climbed the steps to Calvary, waiting for our chance to view the apex of the Rock of Calvary, where Jesus was crucified. Other pilgrims pressed against us and pushed us with no apology. The Greek Orthodox priests, swinging thuribles, tried to process around the chapel that was packed with standing pilgrims. They shoved and shouted at people to get out of the way.

There were no smiles, there was no friendliness, no interest of people in helping their fellow Christians achieve a peaceful moment at such a sacred site. I felt sad that the place where Christ spilled his blood for us did not engender more respect and compassion from people that day.

The tension that I felt in the Church of the Holy Sepulcher is indicative of the tensions that occur in the holy city of Jerusalem every day. Though my time in the Holy Land was truly wonderful overall, I often think of that day on Calvary and wonder if peace ever settles there.

Our ability to be agents of peace and to build community starts by connecting with the peace inside of us — with God. When we do this, then our behaviors more easily fall in line with what Christ expects of us.

Peacemaking involves learning the skills of nonviolent communication and conflict resolution. It calls us to take time with one another and to be attentive to others’ needs — to build relationships. And of course, it always involves forgiveness.

In any situation we find ourselves in, we know that there are opportunities to build peace. It is our choice whether to engage in this work of the Kingdom or not.

The bird-watchers pump $30 million a year into Northwest Ohio’s economy. Though that is quite impressive and important, their real impact and achievement is the sharing and caring they exhibit toward one another and their reverence and connection with God’s creatures. I’m convinced that the birders leave the festival better, more patient and peaceful people, who then spread some of this goodness to others at home. And, I think the birds would agree with me.

Story and photo by Colleen Kammer, coordinator of peace, justice and ecology