In 1835, a year after the Congregation was founded, Mother Brunner, the Sisters’ Foundress, received a letter from her son, Father Francis de Sales Brunner (who would become the Sisters’ spiritual director and bring them to the United States in 1844). Father Brunner, traveling throughout Europe, updated his mother on his adventures and reassured her of his return: “Do not worry about my return. I’ll come as soon as it is pleasing to God. … We must watch over ourselves so that we may not become unworthy to have our Savior so close to us.” 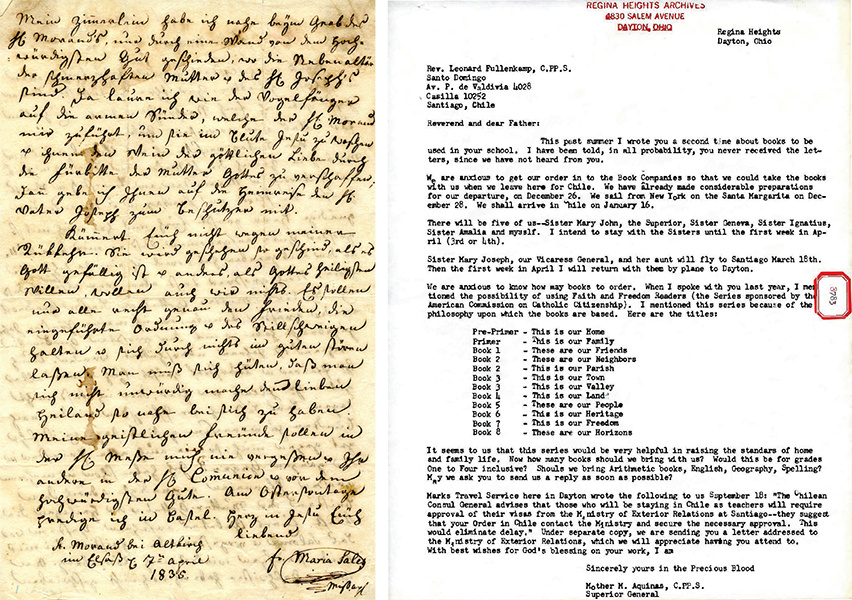 Over 100 years later, the Sisters began a ministry in Chile. In 1956, Mother Aquinas Stadtherr, President of the Congregation, wrote to Reverend Leonard Fullenkamp in Chile asking about what books the Sisters should bring for teaching non-English-speaking students. She also mentions working on obtaining the Sisters’ visas, which all had to be completed by mail. “We are anxious to get our order into the Book Companies so that we could take the books with us when we leave here for Chile. We have already made considerable preparations for our departure on December 26. We sail from New York on the Santa Margarita on December 28. We shall arrive in Chile on January 16.”

In 1988, Sister Rosalina Gonzales wrote a letter from Guatemala, another new ministry for the Sisters of the Precious Blood. She gave a general update and ended with, “I am very happy and grateful to God for calling me to serve and walk with the Guatemalan people … and to our Congregation for making it possible.”

Left, two of the original boxes made by the Sisters to mail Communion hosts; right, Sister Rosalina sent frequent letters from Guatemala to the Sisters in Dayton.

In 1951, the Sisters started a post office, Contract Station No. 2, in the lobby of Salem Heights (now the Maria Joseph Center). The main reason the post office began was so the Sisters could more efficiently send out the very large quantities of Communion hosts to the local community from their Altar Bread Department, as well as vestments to local parishes from the Liturgical Arts Department. Contract Station No. 2 steadily grew and became open to the public. In 1977, the Dayton Daily News published an article about the post office titled “They’re small but friendly.” The article quotes Sister Catherine Kroll who says, “Our business is increasing all the time. We have a lot more outside customers. The next nearest post offices are in Miracle Lane shopping center or Trotwood. This is so much more convenient.”