On Sunday, November 19, Sisters Jane Francis Hoffman and Judy Kroeger were honored to receive an Outstanding Caregiver Award for 2017 at St. Peter in Chains Cathedral in Cincinnati. A little more than 80 people were honored at the White Mass. A White Mass is named for the traditional white garb worn by physicians and medical professionals. In the church, white symbolizes hope and comfort for the ill. The caregivers were recognized for the hope they bring to those they care and minister with and for.

Sisters Jane Francis and Judy were also honored to be chosen to present the gifts at the Mass. At the end of Mass, each caregiver’s name was called and they were given a white rose. Certificates were presented at the reception after the Mass. Both Sisters were happy to represent the caring and life-giving spirit of the Sisters of the Precious Blood. 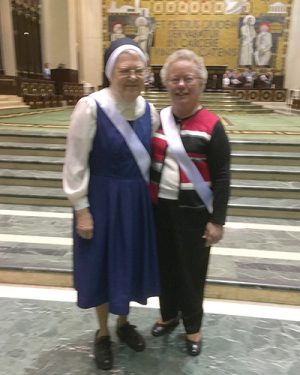