As responsibility for the Maria Stein Shrine of the Holy Relics is transferred from the Sisters of the Precious Blood to a nonprofit corporation, a fund development drive is underway to ensure the Shrine’s financial stability.

“We pray in thanksgiving for the legacy that the Sisters have created here, and we hope to carry that out for them into the future,” said Diana Russell, director of fund development for the Shrine.

The Sisters of the Precious Blood contributed the first $2 million to the Legacy Fund. An anonymous donor pledged another $2 million in matching gifts for any gifts or pledges made until December 31, 2017. As of Nov. 8, $316,000 is needed to fulfill the fund’s $6 million goal.

Over half the Shrine’s revenue comes from fund development. Other sources of revenue include the gift shop, prayer intention candles, Country Fest, Heritage Day Celebration and the Art Show. “But this is only a part of what it takes to operate the Shrine. The other half came from the Sisters’ support each year,” Russell said. “So they knew if they were going to make a plan to transfer the Shrine to laity, they needed to make a plan for financial support that helps the Shrine continue.” The earnings from the $6 million will replace the financial support the Sisters had given each year.

Any gifts or pledges made to the Legacy Fund by Dec. 31, 2017, will be matched by the anonymous donor, up to $2 million, giving donors an opportunity to “double their money.” Any pledges made by Dec. 31 may be paid within five years. For example, a $5,000 pledge may be paid all at once, or as installments over time. Donors who give or pledge $2,500 or more are listed on the Shrine’s donor wall, an interactive touch screen featuring donor names, photos or business logos.

Russell meets with individuals and groups throughout the area to promote the Legacy Fund, emphasizing that “it’s not just about the money; it’s about bringing an awareness of what’s here at the Shrine,” she said. “I like to put it like this: The Legacy Fund is an opportunity to be a part of the future of the Shrine. I feel like it’s an honor to be a part of the Shrine. And I believe that other people do as well. If we don’t tell people about this opportunity, they can’t be a part of it. Like I always say, it’s our job to get the word out there.”

In the early 1990s, Russell — who is from Louisville, Kentucky — went on a pilgrimage to the Holy Land, where she met a woman from Versailles. Some time later, Russell came to this area to attend the woman’s wedding, and during her stay, her friend suggested that she visit the Shrine.

“I was just in awe when I came here,” she said. “I always say, ‘Don’t make people go to the Holy Land to find about this place! Tell somebody about the Shrine!’”

Sister Joyce Lehman, President of the Congregation, emphasized the important role the Shrine plays in the community. “The ministry that we have here of promoting the saints as inspiration for our faith is the most important thing. The business part of it is only there to support that and allow it to happen,” she said. “That’s the reason why the Legacy Fund is there. The Shrine is a wonderful ministry and a spiritual gift, and we as Catholics have a responsibility to support it, for the upkeep of the building, paying utilities, security, staffing, getting the word out.

“I see the Legacy Fund as the hope of the future,” Sister Joyce added. “By building that fund even beyond their goals will ensure that the relics remain in that building at Maria Stein, where they have been for over 170 years.” 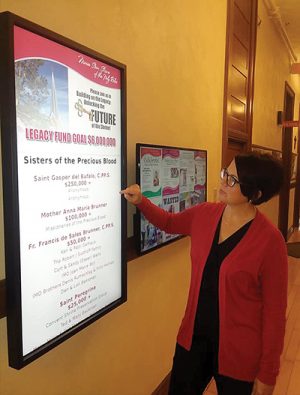 Susie Bergman, marketing coordinator at the Shrine, demonstrates how to use the touchscreen on the Legacy Fund donor wall. Diana Russell photo