People don’t always know what God has in store, but His plan for Our Lady of Kilimanjaro Sister M. Daria Mushi seems to have worked out perfectly. After a decade-long journey that saw her earn a bachelor’s degree and complete medical school, Sister M. Daria this summer returned to her native country to start a year-long medical internship at a hospital in Mwanza, Tanzania.

It is through Missionary of the Precious Blood Father Bill O’Donnell and the CPPS Sisters, that God made possible Sister M. Daria’s journey from college and medical school in the United States and back to Tanzania East Africa.

It’s an ending Sister M. Daria never expected for herself.

She came to the United States in 2001 at the request of her community to study and become a science teacher in Tanzania. In her heart, however, she wanted to return home a doctor to heal and comfort the poor in her region, particularly women and children.

Her odyssey began when she and another Our Lady of Kilimanjaro Sister arrived in Steubenville, Ohio, to study, but after one semester they were out of money and didn’t have a scholarship. They were considering going back to Tanzania when they met Precious Blood Sister Eileen Monnin (M. Emerentia) and spent Christmas 2001 with the Precious Blood Sisters in Dayton. Sister Florentine Gregory heard about these two nuns and contacted Father Bill, then-pastor of Precious Blood Parish, to see if he could help them.

Father O’Donnell encouraged them to leave Steubenville and took them to study in Rensselaer, Indiana.

After a semester they transferred to the University of Dayton. Father O’Donnell found a sponsor in the Mathile Foundation, which covered Sister M. Daria’s tuition for her undergraduate and medical school studies. Her fellow Sister eventually transferred again, finished her degree and returned home. Meanwhile, Sister M. Daria received permission from her order to become a doctor.

After graduating from UD with a bachelor’s she tried to get into medical school in the United States, but the competition was too keen. She ended up attending medical school at St. Eustatius in the Caribbean, passed her boards and completed her clinical training at the American Global School of Medicine in Belize. She was awarded her medical degree during a private graduation at Salem Heights on June 8, 2012.

During the rigors of medical school, she found inspiration and care in Precious Blood Sisters and Father O’Donnell. A room at Salem Heights was always available to her for refuge and breaks. In times of crisis, self-doubt and visa problems, the Sisters were by her side. Precious Blood parishioners prayed for her and sent her letters of encouragement. The Sisters and others maintained contact with Sister Daria.

“It was extremely, extremely love beyond,” Sister Daria said. “There is no way I could have become a doctor without their support.”

Sister Daria left the United States in June and began her internship August 15. After a year, she will earn a license to practice in Tanzania. It will also enable her to network with other doctors.

“Physicians in Tanzania are very intelligent by their own means because they learn from each other and they don’t have the facilities we have here,” Sister Daria said. “We do things together. We share knowledge and that’s our library. That’s how we work.”

Sister Daria will minister to the poor and needy patients in the region, treating such maladies as malnutrition, dehydration, malaria and HIV. She will also be dealing with patients with human immunodeficiency virus (HIV). A key element of treatment, she said, will be educating patients on their conditions and how to take care of themselves in case they are not able to return to the hospital for follow up visits.

To improve the care she can give, Sister Daria is working with MedWish, a non-profit organization in Cleveland that repurposes medical equipment discarded by hospitals and redistributes them in developing countries. Precious Blood Parish paid the $5,000 cost to ship the first container of medical equipment. Sister Daria will use the equipment to furnish a clinic for her order. She has more equipment from MedWish and is raising money to pay for a second shipment.

With her resources, contacts in the United States and the Sisters of the Precious Blood, she sees God working through her to reach others less fortunate.

The last decade has helped her understand her call to religious life. 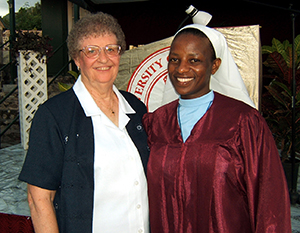 Sisters Pat Dieringer and Daria Mushi before her graduation ceremony at the American Global School of Medicine in Belize. Courtesy photo