A screening of the docu­mentary 2012 “Slavery by Another Name” was the catalyst for a commu­nity discussion on racism July 21 at Salem Heights.

More than 30 Dayton-area residents joined about a dozen Precious Blood Sisters to view the documentary and discuss how the issue is relevant to­day. The documentary details how African-Americans con­tinued to be bound in slavery in the Deep South following the Emancipation Proclama­tion through such means as convict labor.

The event was sponsored by the Sisters of the Precious Blood and Weavers of Justice, a collaborative of parishes and Catholic organizations to address social justice issues in Dayton. The collaborative has made racism and anti-discrimination in the commu­nity one of its areas of focus this year. Other screenings and similar conversations on racism will occur through the region.

“I think people left with a renewed sense of develop­ing good relations and tak­ing some action on the issue of racism,” said Pam Long, regional director of the Catho­lic Social Action Office of the Archdiocese of Cincinnati. 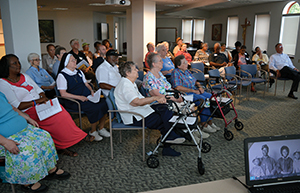 Attendees view the 2012 documentary “Slavery by Another Name” in Grace Hall at Salem Heights.