The doorbell rings, the door opens and a new face appears — the little you can see, as his dreadlocks hide a lot of his story. “I’m Michael,” he says.

“Brunner.” … BRUNNER! Poor Michael did not know why Sister Carolyn and I got so excited. We began to tell him our story of Mother Brunner and I can only imagine he wondered who else works here!

Michael is one of the boys Mike Donovan referred to as “The Lost Boys of Chicago” (The New Wine Press, March 2014, pg. 7). Michael’s father died suddenly when he was three; his life changed and he lacked the things many of us take for granted: family vacations, table talk, faith, security, and hope for a future. So at an early age he began to search for meaning in his life. He took to the streets, made some bad choices, dropped out of school, saw friends shot and killed, had a brother in prison. Seeing the darkness ahead of him, like many of our “boys” he felt alone, doomed to face years in prison or death on the streets.

Mother Brunner or Father Brunner must have been watching out for Michael, because through some probation requirements he was sent to our Precious Blood Center. As soon as he mentioned he liked cooking and had enjoyed his culinary arts class, Father Dave assigned him to Sister Carolyn, and “Mother Brunner Hoying” took him under her wing, embraced him and immediately put him to work. Soon Michael was cutting onions and tomatoes, planning menus, and shopping for groceries. As staff we sneak into the kitchen to get a cup of coffee and are delighted to watch the transformation in young Brunner. He feels secure, responsible; he belongs. He drops his street persona and little by little tells his story, knowing he will not be judged. He smiles and offers hugs; he feels safe and accepted.

Two days ago we knew the PBMR kitchen had turned into the little Swiss chalet of Mother Brunner. Sister Carolyn had Michael kneading dough: “Michael, you need to use the palm of your hand, like this.” And soon Michael is doing just that with great seriousness.

As I write this, it is Palm Sunday and I reflect on the similarities between Jesus and Michael: they stand alone, accused; they fall and they get up, stripped and shamed. Michael has had a difficult journey, broken and scared; we cannot help but weep for him. Michael lives on the edge, on the precipice of destruction. Will he be one of the many black youth locked up or one of the dead? We live in hope that he will not be either, but rather one of those with a future.

Sister Carolyn has been a life-giving presence for him, helping him carry the weight of his cross. As Michael tells of his journey while kneading dough, she is kneading Michael, working with his stories, folding in lots of affirmation and stretching him beyond his imagination. In between, they sauté vegetables and do the dishes.

Each day Sister Carolyn welcomes Michael after school with a big hug and often takes him home so he will not be harmed on the way. She leaves him saying, “Michael, God bless your heart! See you tomorrow.”

Mother Brunner, hear our prayer! Do not let Michael be lost to the streets. May he experience his own coming out of the tomb – his Resurrection!

[Ed. note. This article first appeared in the May 2014 issue of The New Wine Press. Used with permission.] 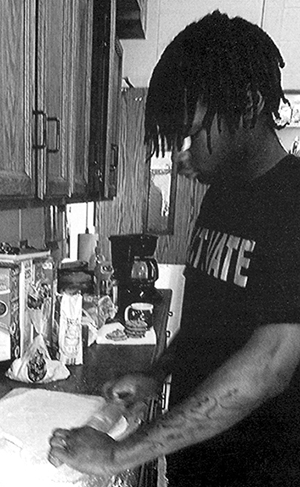 Above, Michael Brunner in the kitchen at PBMR in Chicago; photo by Sister Carolyn Hoying.