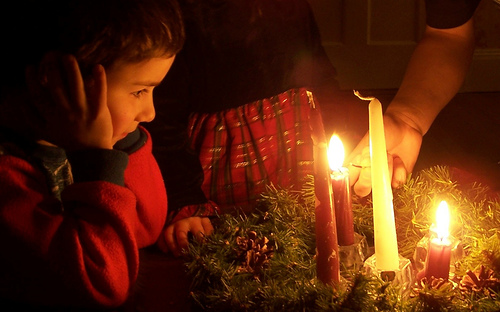 During the season of Advent, the Church prepares itself for the feast of the Nativity of Jesus, the “first coming,” but it also meditates on the final coming of Christ. “Advent,” the four Sundays before Christmas, was pretty well established by the late 6th century. But Advent was a penitential season when people fasted three times a week. Vatican Council II changed this, and differentiated Advent from Lent by emphasizing Advent as a season of hope in Christ’s promise to be with us until the “second coming” at the end of time. Some Protestant Christians use blue as the liturgical color of hope, while we Catholics have stayed with the traditional violet. Advent also is a time to prepare our hearts to celebrate Christmas with spiritual intentionality. During Advent, the Gloria is not sung, so that this song the Angels sung to announce Jesus’ birth to the shepherds might add a “special effect” to the Masses of Christmas. That practice fits with the Advent scriptures of waiting — Israel waiting for its exile to end, and for the fulfillment of the promises God made to it to send a messiah. The three weeks of Advent build up the expectation. The fourth Sunday finds us waiting with Mary for the birth of Jesus. So during all the business and social gatherings before Christmas, our challenge is to stay focused on “the reason for the season.” Home Advent wreaths can help us remember each day to find something hopeful in our world.