Home Our Blog Doe and fawns 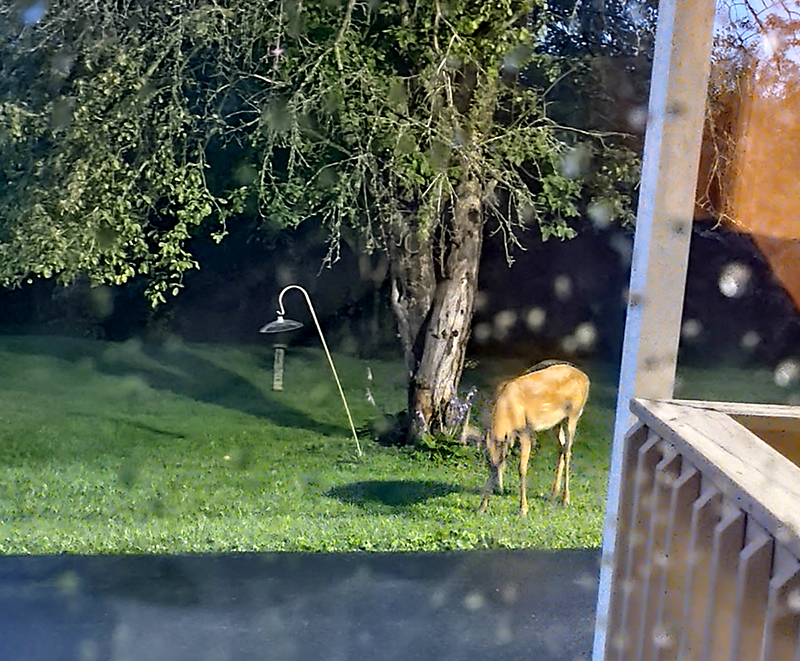 The other night, at the last light of dusk, the motion-sensor light on the garage came on, illuminating the backyard. Curious, I looked out to see what triggered it and saw a tawny doe with her twin fawns. The spots on the twins were just beginning to fade but were still distinct in the light. They had come to feast on the fallen apples beneath the old tree. Every other year the tree bears small, hard, green and very wormy apples in abundance. The first year they fell, I tried to rake them from under the tree to prevent a rotting mess. This soon became a seemingly never-ending, daunting task. The past several years they’ve produced, I’ve not had to do that since the local deer herd has found them and use them as a free buffet. So far this year we have seen the doe and her twins, another larger doe and two young bucks take advantage of this true windfall. Who knows how many more visit in the middle of the night?

I had thought what a harvest the apples would be if they were not so wormy, but trying to spray a 50-foot tree would be a real challenge. So instead of apples and applesauce for our table (and our neighbor’s) we are happy to see them be “recycled” as the deer and the starlings both find nourishment in them. As well, we have the treat of observing some of our “other” neighbors, ones we are often unaware of. The sight of the two small spotted twins roaming the yard with their mother, spots twinkling in the light, was a sight to treasure.