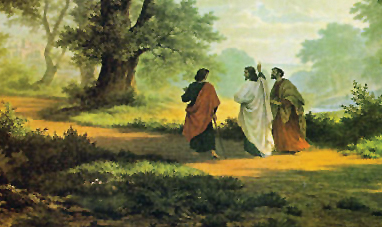 “Were not our hearts burning within us while he spoke to us on the way and opened the Scriptures to us?” (Luke 24:32)

What Scriptures “that referred to him” might Jesus have opened? Which of these make your heart burn within you?

The Lord God said to the serpent, “I will put enmity between you and the woman, and between your offspring and hers; he will strike at your head while you strike at his heel.” (Gen. 3:14-15)

I the Lord have called you for the victory of justice; I formed you and set you as a covenant of the people, a light for the nations, to open the eyes of the blind, to bring out prisoners from confinement, and from the dungeon those who live in darkness. (from Is. 42:6-7)

Your king shall come to you, meek, and riding on an ass. He shall proclaim peace to the nations. His dominion will be from sea to sea, and from the River to the ends of the earth.  (from Zec. 9:9-10)

I gave my back to those who beat me, my cheeks to those who plucked my beard; my face I did not shield from buffets and spitting. The Lord God is my help, therefore I am not disgraced. (Is. 50:6)

My God, my God, why have you abandoned me? All who see me mock me: you relied on the Lord — let him deliver you. So wasted are my hands and feet that I can count all my bones. They divide my garments among them; for my clothing they cast lots. (from Ps. 22)

There was in him no stately bearing to make us look at him. He was spurned and avoided by men, a man of suffering, accustomed to infirmity. Yet it was our infirmities that he bore, our sufferings that he endured. He was pierced for our offenses, crushed for our sins; upon him was the chastisement that makes us whole, by his stripes we were healed. (from Is. 53)

A grave was assigned him among the wicked, though he had done no wrong. If he gives his life as an offering for sin, the will of the Lord shall be accomplished through him. He shall see the light in fullness of days. (from Is. 53)

It is too little, God says, for you to be my servant, to raise up the tribes of Jacob and restore the survivors of Israel. I will make you a light to the nations, that my salvation may reach to the ends of the earth. (Is. 49:6)

For a child is born to us, a son is given to us, upon his shoulders dominion rests. They name him Wonder-Counselor, God-hero, Father-forever, Prince of Peace. His dominion is vast and forever peaceful, from David’s throne, and over his kingdom, which he confirms and sustains, by judgment and justice, both now and forever. (Is. 9:5-6)