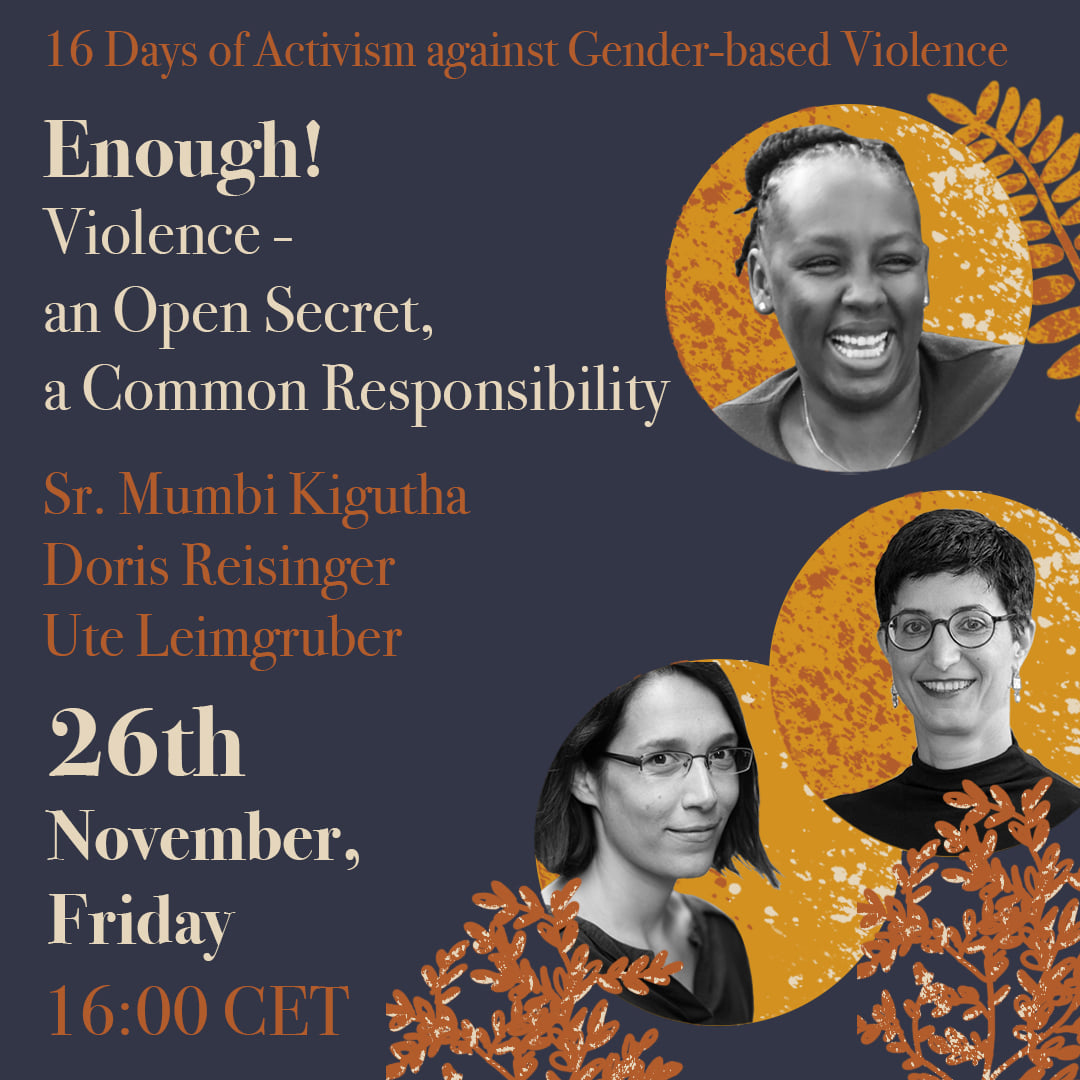 Sister Mumbi Kigutha recently participated in “16 Days of Activism Against Gender-Based Violence: From Violence to Human Rights in the Roman Catholic Church,” a multi-part online series hosted by Voices of Faith. Sister Mumbi’s presentation is available on YouTube.

Based in Rome, Voices of Faith is “an initiative that creates events, media outreach and international network groups to empower Catholic women into decision making roles at local and global levels of the Catholic Church,” according to the group’s website.

Other presentations in the series explored the topics of spiritual abuse and manipulation, and reckoning with the history of slavery and segregation in Catholic women’s religious life. The series was also covered in an article in Global Sisters Report. 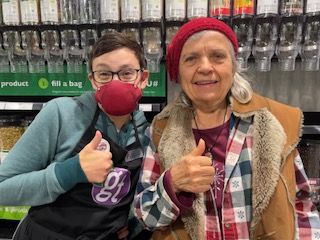 “Thank you” from Greentree Co-op Market

Over the past 18 months, the Congregation has donated COVID stimulus funds to a wide variety of nonprofit organizations across the country. Just one of these organizations is Greentree Co-op Market, a cooperatively owned grocery store in Mount Pleasant, Michigan. The market moved to a new location that opened Dec. 8.

“They are really working hard to expand services to strengthen our downtown community and to work with local farmers to provide organic food to everybody, plus more jobs,” said Sister Marie Kopin, who lives in Mount Pleasant. Read More 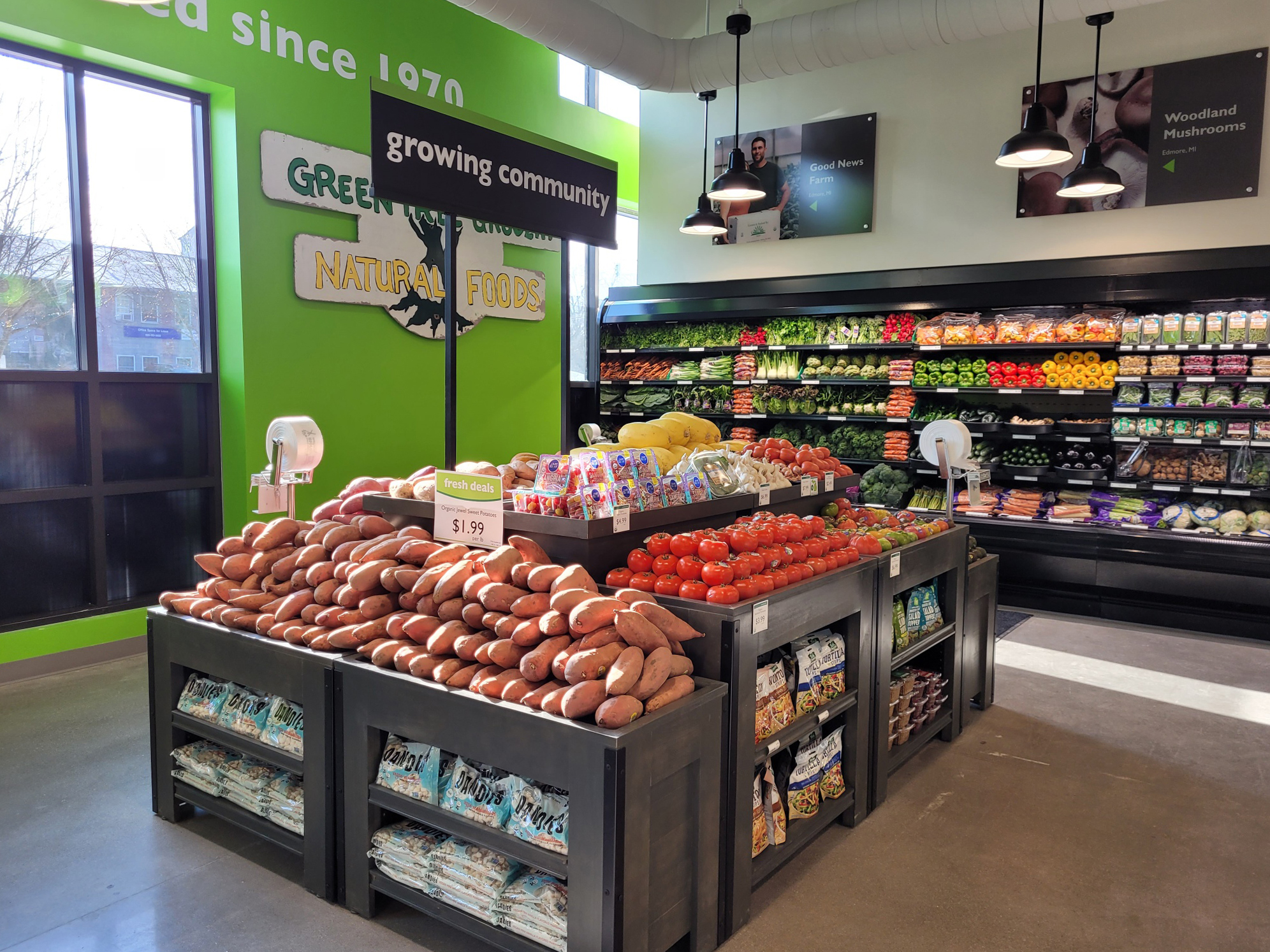 She continued:
As a member-owner since the late 1970s of our Greentree Co-op, I am relaying thanks for the CPPS funding grant sent for the move to the new building. We now have four times the space and are in a much better location in Mt. Pleasant’s downtown area. There was a big crowd this past Wednesday, the “cutting the ribbon” opening day, and the new store is well stocked with many organic/non-GMO and special dietary type foods, and includes space to sit down and enjoy cooked entries from the kitchen in the central area. We also contribute to needy folks with a “free fridge.” This building is a great asset to the city. Many thanks for the funding grant.

Cooperative businesses are owned by “member-owners” who purchase shares and exercise democratic control of the business through voting. The Sisters of the Precious Blood also support Gem City Market, a full-service co-op grocery store that opened on Salem Avenue in Dayton in May 2021. 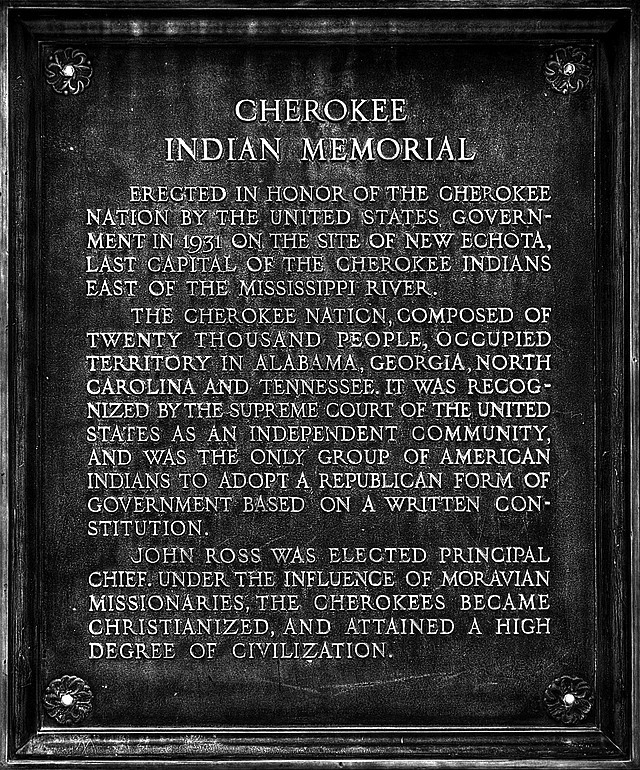 Indigenous peoples in the U.S.

Racism was a topic all of us Precious Blood Sisters reflected on during the last year, and the recent Leadership Conference of Women Religious Virtual 2021 Assembly also discussed it. This complex topic continues to need attention, so this short piece continues our conversation about race.

The candles burn low as I see the spirits of my Cherokee ancestors in heart-wrenching tears leave the courts of “American Justice.” Ancestral lands of Georgia and South Carolina, their homes, all that was theirs, is being taken away. I see their long journey west, the “Trail of Tears,” where disease, exposure to winter snows, and starvation spelled death to half of the 16 thousand souls who began the long walk. Tribe by tribe, death by death, the journey of their tears is multiplied as white settlers take possession of native lands.

The scene above gives only the tip of the iceberg to the scourge of racism that followed the indigenous from 1492 until well into the 20th century. Native population on land that would become the United States was estimated at 7 million to 10 million with the arrival of the Europeans. As demands for land on the part of the new settlers followed, it soon became clear that the war between the white man’s civilization and the natural world of the Native Peoples was here to stay.

Before long the government echoed the cry of the settlers that Native Peoples and the whites could not live together. The indigenous were different in color, and in cultural and religious aspects. They were frightening, and so they were portrayed as pagan savages who must be killed in the name of civilization and Christianity. Insulting to the Native Nations’ high cultural development, even missionaries preached with the conviction that the indigenous “had minds and hearts hitherto uncultivated.” Walt Whitman, a famous American poet, put it grossly in these words: “The nigger, like the Injun, will be eliminated. It is the law of the races, history.” Read More 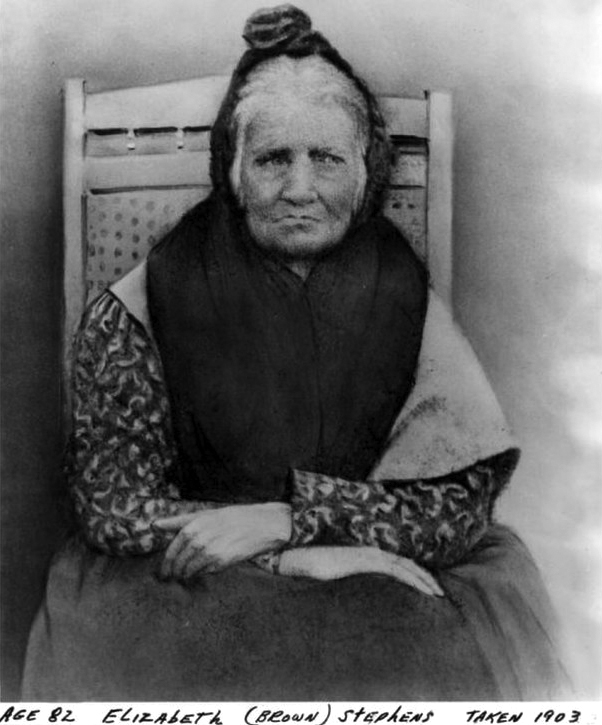 ELIMINATION came in two ways. First by massacres. Mothers watched their children slaughtered before they and the elderly fell to the hatchet or bayonet. Names like “The Creek War,” the “Mankato Executions,” the “Sand Creek Massacre,” “Wounded Knee” of South Dakota, plus many others decimated the Native population. In the end could be counted 1,500 wars, raids, and attacks initiated by the government.

ELIMINATION, secondly, came by way of disease and starvation. Here the story of the slaughter of the buffalo, a great source of food and clothing for the Native peoples, must be recognized. The U.S. Army deliberately slaughtered the bison, reducing the herd of 20 million to 30 million to 300 buffaloes. By 1900, the population of the Native Peoples was reduced to 237 thousand souls.

RELOCATION of the Indigenous from their ancestral lands, as in the Cherokee story, was never-ending until the Pacific coast was reached. Lands rich in promise, lands laden with gold became the white man’s possession, treaty or no treaty. Ultimately the “Indian” was reduced to life on a “reservation.” 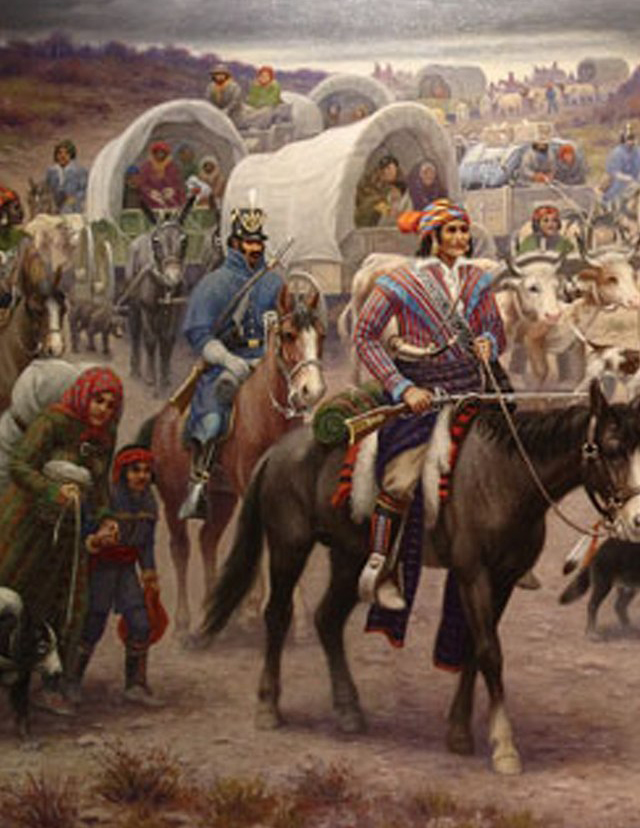 Andrew Jackson, who “graces” our $20 bills, is referred to as a “genocidal sociopath.” This self-named Indian hater wrote that indigenous peoples “in the midst of another and a superior race … must necessarily yield to the force of circumstances and ere long disappear.”

ASSIMILATION became the final effort on the part of the U.S. government to resolve the “Indian” problem. “Kill the Indian; save the man” became the cry: Deprive them of their culture and lifestyles, their ancestral religion and language, their customs, their dress, all that made them unique in the family of nations. Make them Americans. Start with the youth. And so the Indian boarding school was created. Once again cruelty was inflicted. Children were snatched from their homes, some sent hundreds of miles away where, in deprivation of all they knew and loved, they were exposed to “Americanization.” Schools were often overcrowded and disease-ridden. Malnourishment was common, and corporal punishment often inflicted. In such conditions it is no wonder that the mortality rate in those years, which lasted up to the mid-20th century, is estimated at 20%.

Although Native Peoples still suffer from the effects of racism, they have survived to contribute their rich spirituality and heritage to our U.S. culture. With rosary in one hand and Kleenex in the other, I have explored the history of the Native Peoples of the U.S. I invite you to do the same. The candles still burn.

Top, Cherokee Indian Memorial sign at New Echota Historic Site; second, a Trail of Tears map of Southern Illinois from the USDA – US Forest Service; third, Elizabeth “Betsy” Brown, a Cherokee Indian, was on the Trail of Tears; bottom, after decades of war with the US and many broken treaties, the Creek War of 1836 ended. Over 14,000 Creek men, women, and children made the agonizing three month journey to Oklahoma over 1,200 miles over land and water taking only what they could carry. Over 3,500 of them died along the way. 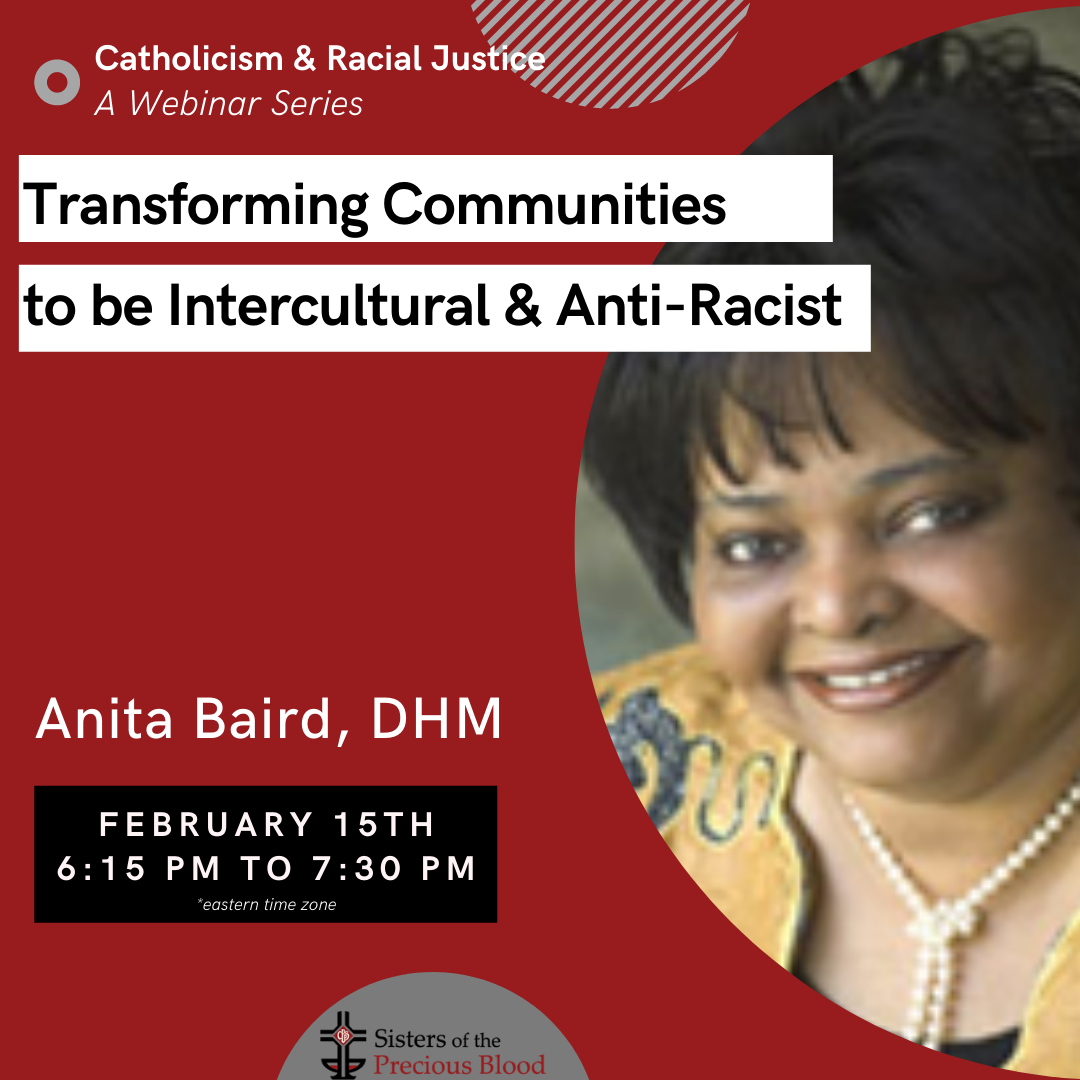 The Sisters of the Precious Blood are hosting the third webinar in our Catholicism and Racial Justice series. “Transforming Communities to be Intercultural and Anti-Racist,” presented by Anita Baird, DHM, will be held February 15, 2022, at 6:15-7:30 p.m. EST.

Sister Anita Baird has been nationally recognized for religious and community activism for her work in racial justice. She was the first African American to serve as chief of staff to the Archbishop of Chicago and was the founding director of the Office for Racial Justice in the Archdiocese. She has served as president of the National Black Sisters’ Conference and is presently on its board of directors.

You are invited to register for the webinar by clicking here. The webinar will also be livestreamed on Facebook at PBSistersDayton.