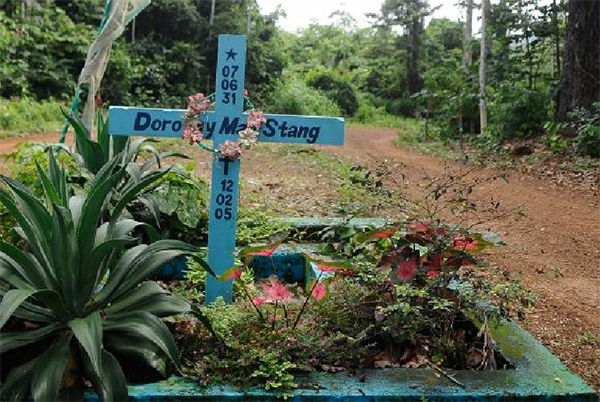 Global Catholic Climate Movement works within the Catholic Church to better care for our common home.

Sister Dorothy Stang, “Martyr of the Amazon,” died February 12, 2005. Sister Dorothy was born in the United States, but moved to live with the poor in rural Brazil. There, she witnessed first-hand ranchers and loggers exploiting farmers and indigenous people, stealing land, cutting down forests, and murdering those who spoke up.

Sister Dorothy courageously spoke up. Over several decades, she pushed for protection of Brazil’s rural poor, especially those in the Amazon. Because of her work for justice, she was named to a death list, and eventually murdered. Here is how her sisters tell the story: “on a dirt road at the Boa Esperanca settlement in a rural area in Para, two hired gunmen fired six shots and killed Sister Dorothy … As the gunmen approached her, she took her Bible from her bag and began to read the Beatitudes: Blessed are those who hunger and thirst for justice.”

In October, bishops from around the world will gather in the Vatican for a month-long conversation on protecting the Amazon and its people. We at Global Catholic Climate Movement will bring care for the Amazon into our programs throughout the year. Please mark your calendars for important moments in the coming weeks.

For Lent, we invite you to add plant-based meals to your diet. It’s a surprising truth that cattle farming is the single largest reason for deforestation in Brazil, and that the average serving of meat has 60 times the greenhouse gas emissions of a serving of fruits, vegetables, and grains. Eating plant-based meals is a way to honor our Lenten tradition of simplicity and stand in solidarity with our brothers and sisters. Sister Dorothy said that “only a profound change in our way of living – our values and attitudes – can bring new life to our world.”

This Lent, protect creation. Add a day of plant-based meals to your diet this Lent, or strive to eat only plant-based meals throughout the Lenten season. Fasting from meat on Fridays is part of our Catholic tradition. It’s a way to live in the simplicity and humility that Jesus offers us.

Growing in simplicity for Lent is a gift of the spirit. We now know that it’s also a way to sustainably inhabit our place in God’s creation.

Many of us enjoy meat, and we’re grateful for the farming families who make our meals possible. Focusing our diets on plant-based meals and enjoying meat as an occasional treat is a sustainable way of living in our common home. It’s a surprising fact that cattle ranching is the leading cause of deforestation in Brazil’s Amazon, and across Latin America – in Brazil, cattle ranching is responsible for approximately 80 percent of all deforestation. This land is often taken illegally from indigenous people.

It also surprises many people to learn that meat production is a major contributor to climate change. Weaving foods that protect creation into our diets is a way to love our neighbors, love that’s needed now more than ever. Adding plant-based meals to our diets is an invitation to honor our Lenten tradition and stand in solidarity with our sisters and brothers around the world. Hear the cry of the Earth. And the cry of the Poor.