The death penalty – both cruel and unnecessary 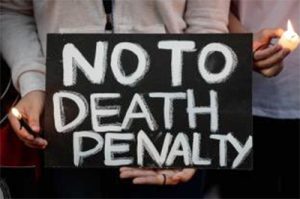 On August 14, as I drove home from work, I heard on NPR that the state of Nebraska initiated the use of Fentanyl in the execution of Carey Dean Moore. For me, this is rather ironic that the state would use a drug common in opioid overdose. Listening to this news report, did cause me to wonder, if other states will use Fentanyl, and make this the “norm” as the “cocktail” usually used to kill an inmate, is not easily available. And, I could not help but imagine, even though I do not live in Nebraska, my name signed to the death certificate, reflecting on social sin and how to promote the value of life when some in society think differently.

The death penalty is such an emotional topic. Proponents talk about revenge and closure. The survivors of the crime, for the most part, seek justice. Those whose job it is to uphold the law, want, and need to do just that, uphold the law.

Those against the death penalty, will talk about the value of life, reconciliation, and hope for remorse on the side of the offender. The value of life, seemingly, has an exception. In the United States, according to the Pew Research Center, 54 percent of the public supports capital punishment while 39 percent percent oppose it. Among Catholics, a majority also favor the death penalty – 53 percent are for it while 42 percent are against it. A larger majority of white Catholics, 57 percent support the death penalty. However, they are less supportive than white evangelicals at 73 percent, and white mainline Protestants at 61 percent.

At the beginning of August, Pope Francis committed the Catholic Church to stand against the death penalty and witness to the value of life, by changing the Catechism of the Church to read, “the dignity of the person is not lost even after the commission of very serious crimes.” Respect for human life includes the lives of criminals. Actually, this step follows the words of Pope Saint John Paul II who frequently called for the end of the death penalty. On July 9, 2000, during the prayer at the Papal Mass at Regina Coeli Prison, he said, “May the death penalty, an unworthy punishment still used in some countries, be abolished throughout the world.

Pope Saint John Paul II recognized a “sign of hope in the increasing recognition that the dignity of human life must never be taken away, even in the case of someone who had done great evil. Modern society has the means of protecting itself, without definitively denying criminals the chance to reform. I renew the appeal I made most recently at Christmas for a consensus to end the death penalty, which is both cruel and unnecessary.” (Homily at the Papal Mass in the TransWorld Dome, St. Louis, Missouri, January 27, 1999)

Another reason for the church’s opposition is that the church always hopes that a sinner will repent and ask for forgiveness. An execution cuts off the time available to the sinner for repentance.

The new statement on the death penalty now reads, “The death penalty is inadmissible because it is an attack on the inviolability and dignity of the person… ” Pope Francis has added the addition that the Church “works with determination for its abolition.”

In addition, “recourse to the death penalty on the part of legitimate authority, following a fair trial, was long considered an appropriate response to the gravity of certain crimes and an acceptable, albeit extreme, means of safeguarding the common good.” Yet today, “there is an increasing awareness that the dignity of the person is not lost even after the commission of very serious crimes. In addition, a new understanding has emerged of the significance of penal sanctions imposed by the state.”

“Lastly, more effective systems of detention have been developed, which ensure the due protection of citizens but, at the same time, do not definitively deprive the guilty of the possibility of redemption,” reads the Catechism now, Revised number 2267.

As I read what Pope Francis has said about the death penalty and, now the call to the Church to promote the dignity of life, I recalled Cardinal Bernardine’s Consistent life ethic. Our Precious Blood Charism asks us to stand where the Blood of Jesus is being poured out today. Let us stand and bear witness to the blood of Jesus that gives life where death wants to prevail.