Being in communion, standing against racism 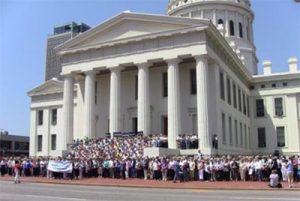 What a powerful experience it was to process to the sound of drums in a silent march two blocks from the hotel ballroom on August 10, 2018, with 800 other sister leaders of the Leadership Conference of Women Religious (LCWR), to stand publicly against racism on the steps of the courthouse in downtown St. Louis. It was at that court-house, in 1857, that the U.S. Supreme Court ruled that no African American, free or slave, could claim citizenship in the United States and was therefore unqualified to petition for freedom in court. Dred Scott, a slave, had resided in a free state and territory where slavery was prohibited but was not entitled to his freedom. Opposition to the decision was a catalyst for the Civil War and led to the adoption of the 13th, 14th, and 15th amendments to the constitution.

Sisters held signs on the courthouse steps that read, Being in Communion, Standing Against Racism.

“In the presence of constant and painful reminders of the deep roots of racism in our country,” LCWR pledges “to go deeper into the critical work of creating communion, examining the root causes of injustice and our own complicity, and purging ourselves, our communities, and our country of the sin of racism and its destructive effects.”

Assembly Directive: Network with other individuals, agencies and groups to be effective in our current reality.