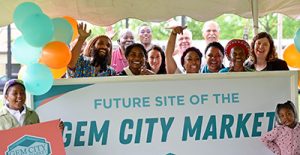 Gem City Market
This summer, the Sisters supported the Gem City Market (GCM) with a generous donation. The worker-owned, cooperative food market, will break ground at the end of this year on lower Salem Ave. Lela Klein of Dayton Co-op and Kenya Baker from GCM gave the Sisters a presentation on September 19. Ambassador Tony Hall of the Hall Hunger Initiative and former U.S. Congressman from Dayton, also came to thank the sisters in person for their support. Click here to learn more details.

Opposition to Affordable Clean Energy Rule (ACE)
In August, the CPPS Sisters approved an opposition statement to the Trump Administration’s Affordable Clean Energy Rule (ACE). It is posted on the website and on Facebook. Click here to read it: opposition to new energy rule. In addition, the Sisters added their signature to the U.S. Catholic Climate Declaration, the Catholic solidarity group of the “We Are Still In (WASI)” consortium. WASI is comprised of companies, government organizations and institutions across the county that pledge to reduce carbon dioxide emissions despite President Trump pulling the U.S. out of the Paris Climate Treaty in 2017.

Motherhouse Community Neighborhood
Colleen serves on the Weavers of Justice task force on Northwest Dayton food insecurity. The task force is looking at ways to increase awareness in Dayton parishes about the lives of people living in poverty, and to garner support for the Gem City Market.

Colleen is also working on getting the Precious Blood community included in discussions that are taking place about west Dayton issues with the University of Dayton and other community leaders.

Sister Jeanette Buehler serves on the Weavers of Justice Anti-Racism task force. The task force has presented very successful white privilege workshops in the area. They will continue this education and will be working with other partners on a large white privilege conference in Dayton in 2022.