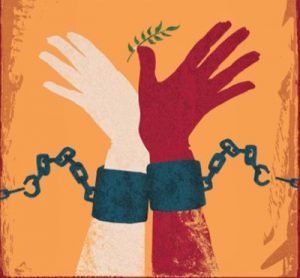 A collaborative group of Dayton churches/organizations called Peace Dayton held over 50 peace activities in September recognizing International Day of Peace, September 21st. One of these events, the documentary Disturbing the Peace, was sponsored by CPPS along with the Ahmadiyya Muslim community and St. Margaret Episcopal Church. It was hosted by Sisters Ann Clark and Jeanette Buehler at Salem Heights. The film was followed by group discussion. The film recounts the history of the Israeli and Palestinian conflict and efforts to bring about peace. It does not take sides, nor does it present a solution. Rather it tells of individuals from both sides coming together out of a desire for peace, wanting that above all for their families and the future. They formed an alliance known as “Combatants for Peace.” The peace they are determined to disturb is the peace of the status quo! The purpose is to build bridges of trust, to re-humanize each other, to lay a foundation of peace built on dignity, security and empathy for both Israelis and Palestinians. It is a film of hope for all willing to take the risk of being peace builders.

Assembly Directives: Network with other individuals, agencies and groups to be effective in our current reality.