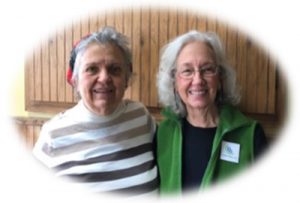 The September 2016 issue of Grassroots contained “A Christian Prayer in Union with Creation.” In the spirit of that prayer, Sister Marie has found many companions in Mount Pleasant, Michigan, to help her spread the word that pollution and the rate of world warming — which make life so much more difficult for the poor, women and children, and the elderly — can still be reversed. One person is Marie Koper, the group leader of the Mount Pleasant CCL/CCE chapter, who promotes climate education and action in our area (see photo).

For instance, there is a motel next to a cross-country ski trail system north of Mount Pleasant that now closes in the winter as there are not enough weekends with snow for skiers to come up and use the facility! What will it be like for winter sports vendors and participants in our northern states? What about the employees of Michigan winter sports industries who depend on them for a living? What about the Winter Olympics, with fewer international sites with enough snow to hold the games? Here in Michigan, snow-making is becoming more and more prevalent for ALL kinds of winter sports. Snowmobile trails may soon cease to exist. With few snowfalls, those who snowplow streets and driveways get less income too. New chapters of CCL, such as one developing in Roscommon County, Michigan, are addressing just those issues.

Marie notes that José Aguto, associate director of Catholic Climate Covenant, which works to care for the poor and all creation, spoke to CCL members on their December 9, 2017, national video call, recommending collaboration. You may wish to check out his talk, and also the international map of CCL chapters in the U.S. and the world. Please share the good news of climate solutions such as these with friends and family, too.

Citizens’ Climate Lobby is a nonprofit, nonpartisan and international grassroots advocacy organization focused on national policies to address climate change. CCL volunteers are empowered to build political support for climate action through the relationships they create with their relentless respect and persistence.

Assembly Directive: Act responsibly in the use and care of our planet’s resources; network with other individuals, agencies and groups to be effective in our current reality.