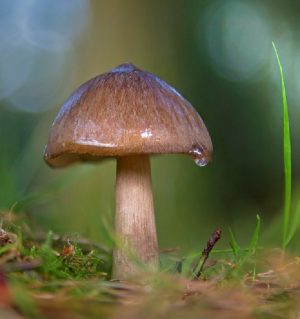 Sister Marie Kopin helped initiate and plan a “Growing Mushrooms at Home” workshop at the 7th Generation Center of the Chippewa Indian Nation which is located in her home town area of Mount Pleasant, Michigan. She worked with Sally Van Cise, tribal nutritionist for an event on Saturday, May 25th. Dr. Chris Wright did the demonstration which included boiling and sterilizing a bale of straw and cotton seed husks and then letting participants mix it with a “starter” containing mycelium of oyster mushrooms on a clean tarp on the ground. They then stuffed the growing media into plastic bags to take home. Marie gave a talk and prepared a handout about the basics of fungi and how they grow to produce mushrooms and Chris followed with a talk on details of the growth process after lunch was served. The day was well received and some went home anticipating crops of mushrooms to sell at their farmer’s market.

Marie was also invited to give a talk several weeks later on “The Mushrooms of Spring, Edible and not Edible” in a smaller Saginaw Chippewa Nation tribal setting near Saginaw Bay and the town of Standish, called the Saganing Tribal Center. She covered mainly the “Beefsteak” mushrooms well known in Michigan and which contain dangerous “Rocket Fuel,” Monomethylhydrazine. She elaborated on what it can do to destroy the liver and kidneys. She also gave some basics about mushrooms/fungi and covered identification techniques for the “Safe Four” kinds of wild Michigan Mushrooms.

Directive: Act responsibly in the use and care of our planet’s resources