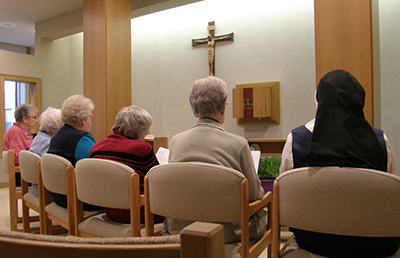 For many years now the Sisters at Salem Heights have been an integral part of the homicide vigil ministry of our Dayton community beginning in 1993. In 1995 the Sisters received the People of Peace Prize for their leadership in holding Prayer Vigils. In addition, while the Sisters were praying at the Vigils on the streets, the Sisters back home at Salem Heights prayed in the chapel either at the same time or during their evening prayer.

The Prayer Vigils slacked off for a bit in 1999. Later, the Dayton Precious Blood Collaborative, an ecumenical group of churches brought together through the Sisters and Missionaries, restarted the vigils in 2006. They now continue under the leadership of Sister Jeanette Buehler as “Community Homicide Prayer Vigils.” In 2018 Sister Margie Zureick discovered the history of Sisters praying in the chapel in solidarity with those Sisters at the Prayer Vigils on site. She invites others to join her in the Adoration Chapel at 12:30 pm on Saturdays to be in solidarity with those who are at the outdoor Prayer Vigil on the street. Sisters, especially those who cannot go to the sites, are joining her in the Prayer Vigils at home in the chapel.