In the July/August 2018 issue there is an interesting article, “Michigan’s Mushroom Madness,” in Michigan History magazine. This five page article by Barbara J. Barton features an interview with Sister Marie Kopin describing how her family started out as immigrants from Poland, then settling in Flint, in Genesee County in Michigan. There she and her father Chet Kopcinski/Kopin carried on to become teachers of mycology.

The first part of this article tells of how native tribes used mushrooms for several purposes besides meals and identifies some of their favorite species. The third and last part of the story points out that cultural acceptance and use of Michigan’s mushrooms by most settlers and their offspring was ultimately a long project. As various people began to offer classes and training sessions there were fewer deaths from severe toxins found in several species. The first “favorite four” classes were taught because there were no “look alikes” and thus people made almost no mistakes in eating these: sulphur shelves, puffballs, shaggy manes, and, of course, morels. These four species also all grow in abundance in Ohio.

The July/August issue of this magazine can be read in your public library. More information can be found at hsmichigan.org. 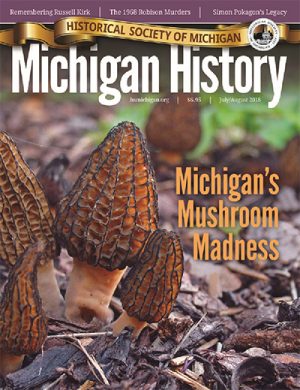 Sister Marie Kopin was approached by Steve Smith, one of the producers of Public TV station WCMU, to be videotaped at her Educational Spring Mushroom Foray at Deerfield Nature Park in Isabella County. It was to be part of the weekly CMU TV program “Destination Michigan,” 9 p.m. on Thursdays and points out many interesting venues to visit here in Michigan and would be played on several other public TV stations. From approximately three hours of filming us maneuver through the woods, listen to a presentation, and interviews with participants, it was included in the middle of the 25-minute program in a part called “Michigan Mushrooms.” For five minutes, viewers get to watch Sister Marie orient and teach the participants, watch an interview or two, and see a participant pick a “beefsteak” mushroom while others search the woods, later laying out specimens for naming. Since we did not find any spring morels, the most sought-after species up here, the program moves quickly to an indoor mushroom-growing facility, “Gourmet Mushrooms Michigan,” near Scottville, Michigan. Viewers see a large room full of morels, carefully grown inside. Yes, they have the secret which we all want to know! The five minute segment concludes by returning to Sister Marie’s foray group showing the specimens collected and noting that while tasty morels are the “best” and can grow indoors, nothing tops those trips in the wonderful woods filled with surprises, fresh air and all life with God’s creatures. To see this five-minute part “Michigan Mushrooms” click here. If you would like to see the full 25-minute program, click here. Of special interest to environmentalists is the segment on Burh Becc at Beacon Springs, a certified “living building” made entirely of nontoxic materials – click here to view the video.

Assembly Directive: Act responsibly in the use and care of our planet’s resources.