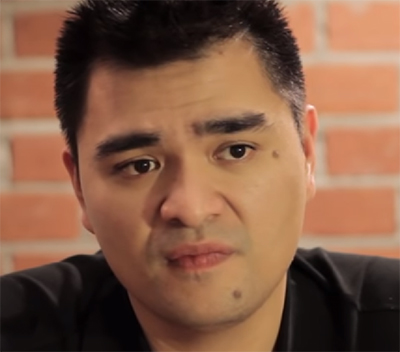 Jose Antonio Vargas, Pulitzer Prize-winning journalist, Emmy-nominated filmmaker, author and a champion for immigrants, spoke at Xavier University’s Cintas Center in Cincinnati on November 15. Sister Mary Wendeln, C.PP.S. and Colleen Kammer attended the gathering, which was the annual meeting of the Intercommunity Justice and Peace Center (IJPC). The Sisters of the Precious Blood were a major sponsor of the event.

Born in the Philippines, Jose Antonio Vargas’ mother sent him to live with his grandparents in the United States when he was twelve. He didn’t know he was undocumented until he applied for a driver’s license at the age of 16. Vargas made it through school and beyond, working and paying taxes, through the kindness of his teachers and friends.

In 2011, Vargas publicly disclosed his undocumented status in a New York Times magazine essay in order to promote dialogue on immigration. A year later, he appeared on the cover of TIME magazine with other undocumented immigrants, in a follow-up cover story.

At the IJPC event, the personable Vargas told the audience that there are 258 million migrants in the world today – people on the move in search of a home. As of 2015, there were 43 million immigrants in the United States, about 12 percent of the country’s population. Eleven million of those immigrants are undocumented.

“Immigrants do not come to the U.S. because they want a better life”, Vargas claimed. “Many times, they come here because of the situations that the U.S. had a role in or caused, in other countries.”

Vargas founded Define American, a non-profit media organization that counters anti-immigrant hate through the power of storytelling. Its web site, www.defineamerican.com, offers helpful information, including talking points for people to use in conversations about immigration.

The library at Salem Heights contains Vargas’ memoir, Dear America: Notes of an Undocumented Citizen, that was released in September. On the book’s inside flap, Vargas said, “After 25 years of living illegally in a country that does not consider me one of its own, this book is the closest thing I have to freedom.”

Vargas has not been able to see his mother in the Philippines for over two decades. Addressing the U.S. citizens in the 400-person audience at the Cintas Center, he said, “I hope you know the freedom you have (to go anywhere). I hope you remember that 11 million of us are fighting to have what you have.”

Assembly Directives: Stand with the marginalized