The North American Academy of Liturgy has named Sister Joyce Ann Zimmerman the recipient of the 2020 Berakah Award, which is given to liturgists in recognition of distinguished contribution to the professional work of liturgy.

Sister Joyce Ann received the award at NAAL’s annual meeting in January in Atlanta. Founded in 1973, NAAL is an ecumenical and inter-religious association of liturgical scholars collaborating in research concerning public worship. The Berakah Award — named for the Hebrew word meaning “blessing” — has been given annually since 1976. Sister Joyce Ann has been a member of the organization since 1987.

Weaver said Sister Joyce Ann’s earliest writings constituted “a journey into academic scholarship on liturgy and liturgical formation that grew into a robust catalog of publications that has enriched the Roman Catholic Church, significantly contributed to the body of liturgical scholarship, and advanced the ecumenical dialogue of the wider Church.”

Also at the NAAL annual meeting, Sister Joyce Ann delivered her response to receiving the award, in an address titled “The Relationality of Gratitude.”

“When NAAL President Bruce Morrill phoned me and invited me to receive the 2020 Berakah Award, of course I felt deeply honored. But even more deeply, I felt great humility as I reflected on what receiving this award means,” Sister Joyce Ann said. “Gratitude evolves in a community of persons, especially in a community of faith. No worthwhile honor can rightly be bestowed on someone who acts totally alone. Honoring an individual is a tacit recognition of all those others who contribute to making a person who she or he is.”

In honoring the various communities in her own life, she acknowledged her family; the Sisters of the Precious Blood; and the members of the North American Academy of Liturgy and friends.

“Precious Blood spirituality and how I have theologically developed my understanding of liturgy over the years are perfectly meshed,” she said in a recent interview. “What Mother Brunner gave us with her devotion to the Eucharist is the fullness of what liturgy is about: the celebration of the death and Resurrection of Christ, and our entering into this mystery.”

Sister Joyce Ann is founding director of the Institute for Liturgical Ministry in Dayton, an adjunct professor of liturgy, a frequent speaker and facilitator of workshops, and a prolific author, editor and collaborator. She holds a Doctorate in Sacred Theology from St. Paul University in Ottawa, Ontario, and a Ph.D. in Theology from the University of Ottawa.

Her most recent book — How Deep the Mystery: Meditating on the Words of the Mass — was published in January by Liturgy Training Publications. 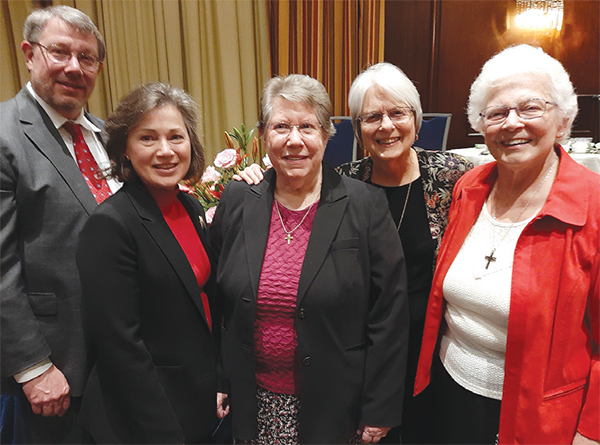