Inside the CPPS Archives – “Back Woods” Newspapers

December 1891 issue of Back Woods

The “Back Woods” Newspaper was written and illustrated by Sisters attending the Gruenenwald Convent Normal School (near Cassella, Ohio) between 1883 and 1892. The Normal School provided training for Sisters who were preparing to be teachers in the various schools where the Congregation taught. The issues in the CPPS Archives, from December 1890 and December 1891, give a glimpse into the lives of the pioneer Sister teachers in northwest Ohio.

The articles in the newspapers varied from how the Sisters celebrated Christmas, to updates on the students and superiors, to tips for teaching. Each issue has sections in English and German, as both languages were spoken by Sisters at the time. 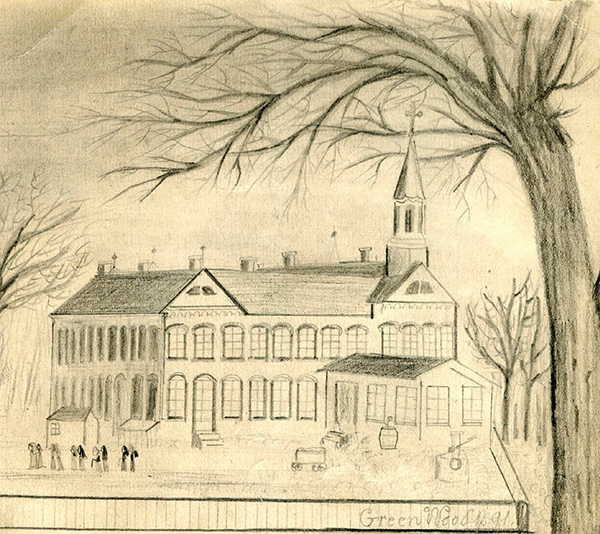 This is a rendering of the Gruenenwald Convent in the December 1890 “Back Woods” issue. On the lower right side of the drawing, a caption says “Green Wood 1891.” Gruenenwald in English means “Greenwood” and was named after the wooded area around where the Convent was built in 1850. On the bottom left side, Sisters are seen walking in front of the Convent in their habits.

This poem from the December 1890 issue was meant to be used in the classroom with primary school students to help them learn how to count. 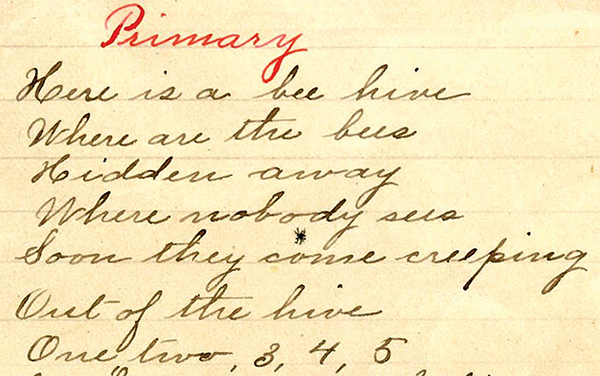 Here is a bee hive

Where are the bees

Out of the hive

Additional instructions after the poem say, “This should be recited with fists doubled and at the [counting] line, the fingers are brought out one by one.”

In the December 1890 issue, the Sisters wrote: “A Merry Christmas and Happy New Year to all the members of our community! May the new year bring prosperity, enlargement and joy to each and every one. That every teacher may be more successful this year than last is the hearty wish of the ‘Back Woods.’”

To close the December 1890 issue, Sister Mary Cecilia Lang (head of the Normal School at Gruenenwald from 1886 to 1892) wrote: “This paper costs a rosary. Sr. M. Cecilia.”