On Sunday, July 30, 2017, we had our first Precious Blood prayer walk to the sites of five murders here in Santa Rosita, one of the five sections of the Precious Blood Parish here in Guatemala City. It took place following the 7 a.m. Mass at the church. The Precious Blood Spirituality group in the parish helped to organize it, with input from Sisters Terry Walter and Joyce (Joyce Miriam) Kahle and a former gang member who gave us the exact locations of the murders.

Members of the prayer group contacted the families of the victims to see if they wanted to be included. There were more than five murdered, but only the Catholic families wanted to be a part of it. We had a large crowd of people from Santa Rosita that joined us. At each site, we prayed an adapted Seven Offerings of the Precious Blood that included prayers for the victim, the family, the community, the perpetrator of the crime and for an end to violence. Then Deacon Victor Navichoc prayed a special prayer and gave a blessing to any family member at that site. It was really quite powerful. The prayer walk ended with a closing prayer at the church.

Our second prayer walk took place October 29, 2017, also in the Santa Rosita neighborhood. Once again we prayed at five murder sites and the newly ordained Father Victor Navichoc blessed the families of the victims.

We all live in such dangerous times — and some of us in more dangerous areas than others. The gang activity is heavy here in Guatemala, as it is in Chicago, but it isn’t something we think about a lot until there is a violent incident. Any one of us could be in the wrong place at the wrong time. We just trust that God is with us and that God’s angels are protecting us, and so we go about our ministries without giving the gangs a second thought because we won’t let fear consume us.

We are thinking that we will do a prayer walk in each neighborhood of the parish. It’s so sad that this is even needed, but hopefully it will make a difference in the neighborhood. We know it made a difference for those families who have participated already and those of us who joined them. 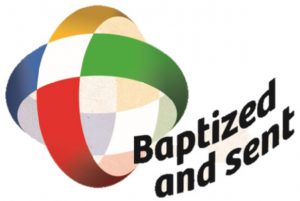 The logo of the Extraordinary Missionary Month October 2019 is a missionary cross where the primary colors refer to the five continents. The Cross is the instrument and direct sign of communion between God and man for the universality of our mission, and through its vibrant colors, a sign of victory and resurrection. The world is transparent because the action of evangelization has no barriers or boundaries, it is the fruit of the Holy Spirit. Christian charity and the world transfigured in the Spirit overcome distances and open the horizon of our minds and hearts. The words Baptized and Sent next to the image indicate the two characteristics of every Christian: baptism and proclamation. (Source: Pontifical Mission Societies in the United States).