Inside the CPPS Archives – Sisters in the Southwest

Over 200 Sisters have served in the southwestern states of Arizona and New Mexico since 1903. These Sisters were teachers, nurses, advocates and volunteers to citizens of several Native American nations (including the Apache, Hopi, Tohono O’odham, Pima, Zuni, Yaqui and Navajo), as well as Mexican Americans. The following photographs showcase a sampling of the Sisters’ ministries in the Southwest. 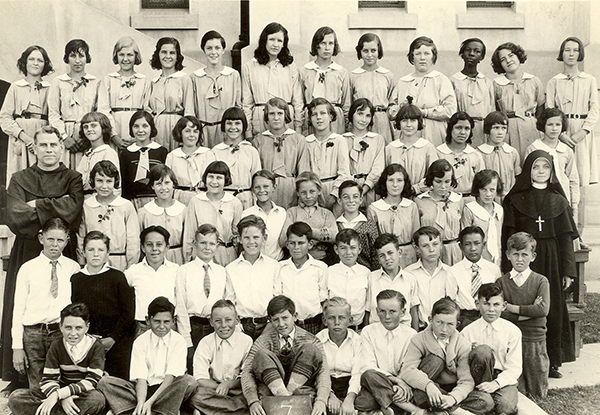 Clockwise, from top left, Sister Mary Luca Junk stands in front of her car, packed with supplies to give to the poor of Phoenix, Arizona, at the Immaculate Heart Parish, ca. 1960; Sister Mary Gemma Koenig sits in front of a banner for the Christian Formation and Evangelization Center (which she helped to launch), Diocese of Gallup, New Mexico, ca. 1977. This organization helped train teachers as well as provided Catholic education workshops; Sister Mary Georgiana Pahl leads children of Guadalupe, Arizona, in their summer reading program at the Community Center Library, June 1981; Sisters Marita Beumer and Ann Clark with Sister Cecilia, a Sister of Charity of the Incarnate Word, at Annunciation House in El Paso, Texas. Sisters Marita and Ann volunteered with other women religious to help migrants at the U.S.-Mexico border in January 2019. They both previously ministered in the southwestern U.S. for many years.