With nearly 100 years on Salem Avenue, the Sisters of the Precious Blood have created close ties in the city of Trotwood

After Sisters of the Precious Blood first arrived in the United States in 1844, they worked tirelessly to forge a new life on the frontier. Everything they ate, used and wore had to be made by hand; they provided food and clothing for themselves and other missionaries while also opening schools and orphanages and caring for the sick.

For nearly 80 years, home was the motherhouse at Maria Stein, Ohio. But in the early 1920s, Mother Emma Nunlist purchased 75 acres two miles north of Dayton for a new motherhouse. She felt that the Sisters needed to be closer to the amenities the city of Dayton could provide, including health care and educational facilities. She also thought that being close to a more populated city would allow the Sisters to find more volunteers to help with Perpetual Adoration of the Blessed Sacrament, a hallmark of the Sisters’ lived vocation since their founding.

The building of the new motherhouse brought with it a tradition of employing local workers to complete construction jobs; the Sisters have provided work for hundreds of people throughout their time in Trotwood.

Thousands of Daytonians attended the “festival day” when the new motherhouse was dedicated; a bus service was offered to shuttle guests from West 4th Street to Salem Heights and back. An excerpt from Not with Silver or Gold, a history of the Congregation that was published in 1945, explains that not all neighbors were welcoming at that time:

On September 8, 1923, the chapel was dedicated to the Immaculate Conception by Archbishop Moeller. This occasion brought many visitors to inspect the building — some of them interested relatives and friends, and others curious neighbors who were eager to verify the rumor that the convent was housing stores of ammunition in the basement. The covered trucks conveying household goods from Maria Stein, which for weeks during the summer had been seen driving up at the convent in the early hours of the morning, seem to have given grounds for this suspicion. The tale may have been started by members of the Ku Klux Klan, who, to arouse bigotry, made the Sisters out to be revolutionists liable to rise up in rebellion at any moment. One night, a few months after the Sisters were settled in their new home, a huge cross was burned on the lot directly opposite the building.

“In spite of the Sisters’ experience of being threatened in those early days, we never abandoned this area and its people,” said Sister Edna Hess, current president of the Congregation. “We have always been and will remain loyal partners with this community.”

The Sisters established deep roots as educators in the area. In 1924, the Sisters started a day school at Salem Heights for local Catholic children in grades one through eight. This school operated for 22 years. In 1946, the Sisters began teaching at St. Rita School in Dayton and offered CCD classes for children there in 1948.

Also in 1948, the newly established Precious Blood Parish celebrated its first Mass in the Salem Heights basement. The following year, the Sisters of the Precious Blood donated the property which is the current site of the parish. The site included a 75-year-old barn, which was renovated into a church and two classrooms, where the Sisters began to teach that same year.

The Sisters’ long tradition of ministering as educators includes adult literacy education with the Brunner Literacy Center. Founded by the Congregation in 2011, the center has assisted over 1,700 people with Adult Basic Education, preparing for the GED, learning English, or pursuing continuing education. In 2019, 357 active students — between the ages of 19 and 82, and from 32 different countries — logged over 11,600 hours of instruction. Over 100 students have earned their GED. Some students have attained U.S. citizenship. Countless others have achieved personal and professional goals.

Sister Helen (M. Herbert) Weber, who co-founded the center with Sister Maryann (M. Veronica) Bremke, has attributed the center’s success to support received from the Congregation, as well as the efforts of individual Sisters. “I think we tapped the experiences of our Congregation very well,” she said. “We had a meeting to see if anyone would be interested in it, and about 30 people showed up. Some Sisters had taught primary grades. Their experience was invaluable when somebody came in here who couldn’t read at all. They brought in those teaching skills. The support of the Congregation, aside from the money that has been available over the years, in terms of people and their skills were critical in our development.”

Throughout the ongoing pandemic, Brunner Literacy Center has continued to provide education services at no cost to its students. Following a brief closure in accordance with state guidelines, the center reopened in May; tutoring services also continue through distance learning. The center is located on Salem Avenue across the street from Salem Heights, the Congregation’s central house in Dayton.

Caring for the sick and elderly

The Maria Joseph Home for the Aged opened in September 1930; 10,000 people were on the grounds for the opening celebration. During the Great Depression, the Maria Joseph Home became a safe haven for destitute seniors. Today, while the Maria Joseph Nursing and Rehabilitation Center is no longer owned or operated by the Congregation, it continues the Sisters’ legacy of caring for the sick and elderly.

Sister Alice (Rose Miriam) Schoettelkotte is just one Sister who has ministered at Maria Joseph; she served there in various capacities for 37 years. In 2018, the center named a scholarship program for Sister Alice, which is funded by the Congregation and provides grants to both local high school students and current employees of the center.

During her time at Maria Joseph, Sister Alice served as admissions counselor and coordinator and director of spiritual care, maintaining the facility’s chapel, scheduling priests and ministers for Masses and interdenominational worship services, visiting residents, holding Bible studies and doing “whatever is needed for spiritual care,” she said.

Until the onset of the pandemic, she served as chaplain at the center, along with Pastor Robert Walker of Unlimited House of Prayer in Dayton. “A few years ago, I had been looking to hire someone as chaplain. One day, I walked out to the lobby, and a man was talking with the woman at our front desk,” Sister Alice explained. The receptionist asked Sister Alice if she could help the man — he was looking for a chaplaincy job and wondered if the center had any openings. “I threw my arms up in the air and said, ‘Thank you, God!’” she said.

Sister Alice and Pastor Walker’s working relationship led to the Congregation’s inviting him to speak at Salem Heights last year, telling personal stories of his own experiences of racism.

Throughout the pandemic, group gatherings at Maria Joseph — including religious services — have been cancelled. On March 19, Sister Alice began holding a service from the center’s chapel that was broadcast over its TV system; Pastor Walker held one the next day. Shortly thereafter, Sister Alice was no longer able to go to the center, so Pastor Walker continues an 11:00 service every day, Monday through Friday — and also ensures there’s a candle burning in front of the Blessed Sacrament.

“He’s been a real gift to Maria Joseph,” Sister Alice said of Pastor Walker. “He’s a good preacher; he brings the people in so that they can relate to his message. He’s very much welcomed by the people. He’s very gentle, though he can be quite a spirited preacher — and people feel comfortable with him.”

Precious Blood Sisters have been, and remain, active in the community in a range of activities, planting the seeds of cooperation and teamwork — sometimes literally. In 2017, Sister Mumbi Kigutha worked with individual Sisters and members of the local community to establish a community garden that allows new families settling in Dayton from refugee camps around the world to grow their own food, much of which are vegetables that aren’t readily available in the U.S., such as African eggplant.

Also in 2017, Sister Jeanette (M. Paul Agnes) Buehler was one of nine women to receive a Halo Award from the city of Trotwood, designating her as an “Angel in Trotwood.” Trotwood Mayor Mary A. McDonald noted at the time that Sister Jeanette was chosen for the honor, in part, for her leadership in the homicide prayer vigils effort.

In 1993, the Sisters of the Precious Blood began holding prayer vigils at sites where homicides had occurred. The group prayed at 131 sites until May 1997. In 2006, the Sisters and the Missionaries of the Precious Blood brought together an ecumenical group that resumed the work of this ministry. Since March 2006, the Community Homicide Prayer Vigil group has organized over 500 homicide vigils in Dayton, Trotwood, and Harrison and Jefferson townships. Through prayer and advocacy, the group seeks justice for all victims and their families — listening to their stories and speaking out about the lives lost one by one.

The Congregation has also developed a significant relationship, characterized by collegiality and hospitality, with United Theological Seminary, the highly regarded United Methodist seminary in Trotwood. UTS students and staff occasionally have housing at Salem Heights; individual Sisters have served at the seminary as board members; and Sister Judy Niday has served for the past seven years as a spiritual director and facilitator, working on a team of spiritual directors and facilitators from a variety of faith traditions to connect with and guide students as they assimilate theology, practical ministry skills, personal life and call exploration.

And when neighborhoods around Salem Heights were devastated by tornadoes on May 27, 2019, Sisters and congregational staff members lent a hand at the drop-in center operated by Precious Blood Parish, where local residents could pick up food and other necessities. In addition, Sister Karen Elliott organized a group of students from Mount St. Joseph University in Cincinnati who devoted part of their spring break to tornado recovery for Five Rivers MetroParks, a public park system serving the greater Dayton area.

As the Congregation looks to the future, it remains committed to being a part of the fabric of the community, collaborating with the city and local agencies to serve wherever Sisters are needed in mission.

“The members of our Precious Blood Congregation are typically born and raised in other places, but this is our home,” Sister Edna said. “We Sisters deeply value the relationships we have here in Trotwood, and we will continue to build on those relationships to ensure that we may continue to work together for the good of all, and for the continued growth and revitalization of Trotwood.” 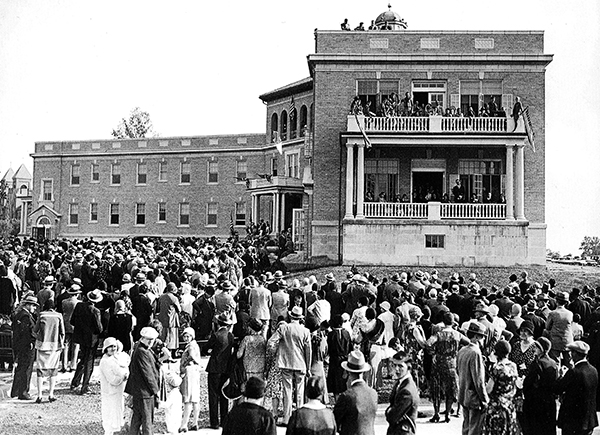 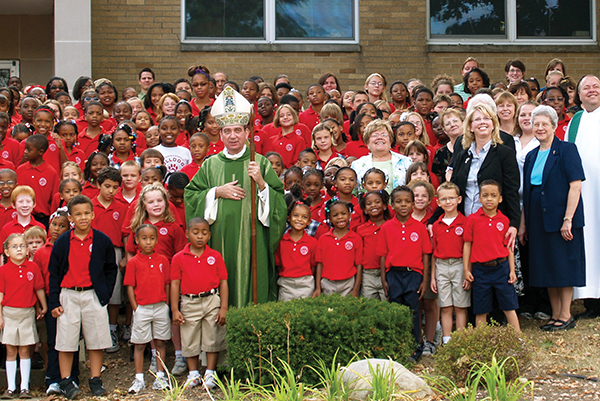 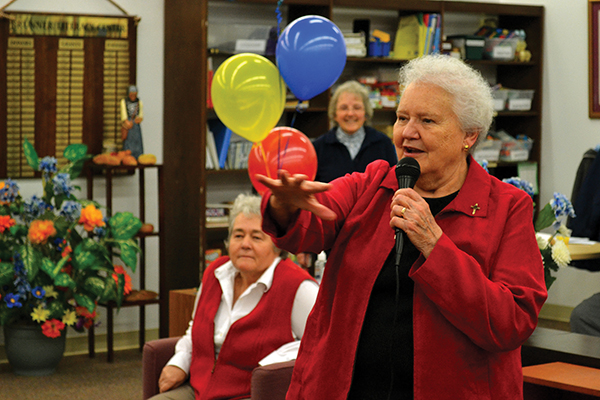 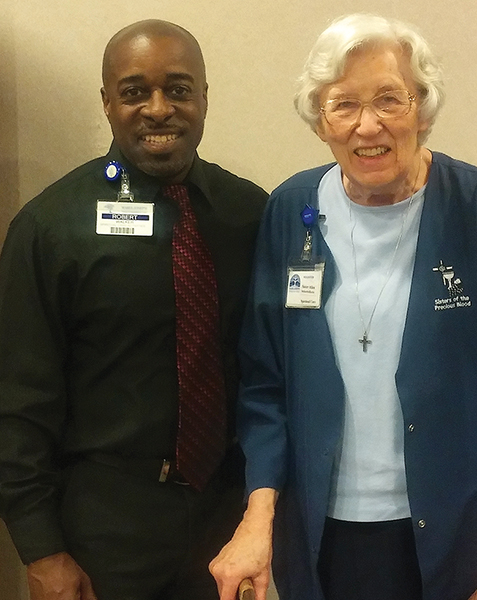 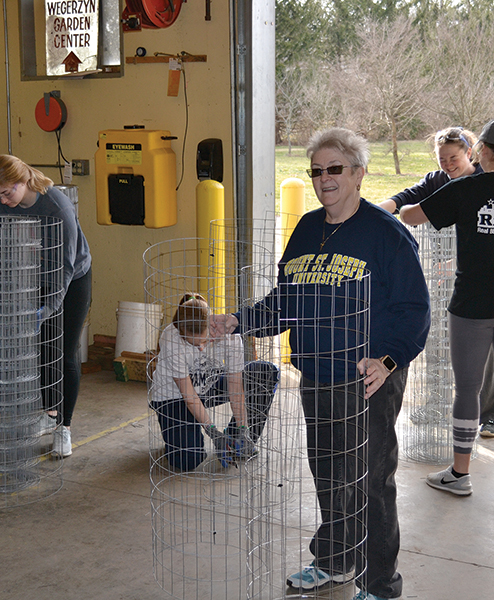 From Mayor Mary A. McDonald, City of Trotwood 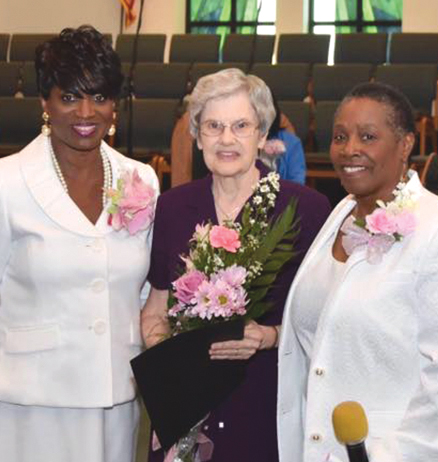