Archival Snapshot: a day in the life of a Sister of the Precious Blood 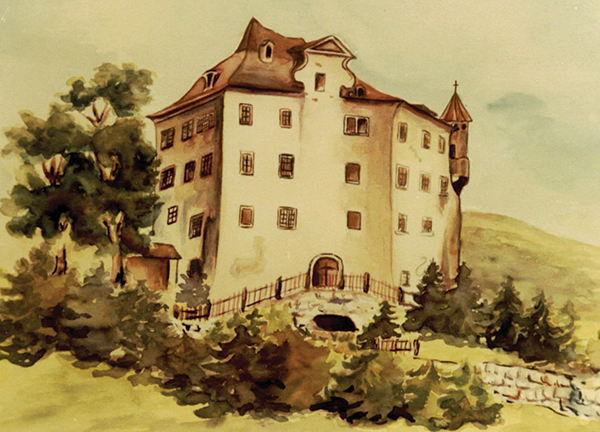 Where did she live?
Ohio or Switzerland

What was her ministry?
Sisters took care of orphans, especially orphan girls; taught the children of German immigrants in the area of New Riegel, Ohio; and participated in activities related to the self-sustainment of their convent in Ohio and the Castle Loewenberg in Switzerland (housekeeping, gardening, laundry, sewing, cooking, etc.).

What was her daily life like?
General – Sisters’ lives were very structured in both Ohio and Switzerland, with set times for every activity. The settlement at Peru, Ohio, and, later, the convent at New Riegel, Ohio, were self-sustaining, meaning Sisters made their own clothing and grew their own food. It was at times a very difficult life full of hard labor, which was consistent with pioneer life in Ohio during this time. Silence was observed at all times unless work required otherwise.

Prayer – Prayers were said at set times. Nocturnal adoration was observed when possible due to the weather, the health of the Sisters and other conditions.

Number in Congregation – Ten in the United States by Christmas 1844 and close to 20 in Switzerland [numbers vary based on primary source records from 1834 to 1844].

Where did she live?
Arizona, California, Colorado, Indiana, Missouri, Ohio or Washington, D.C.

What was her ministry?
Sisters still taught local children and took care of orphans; they also continued the activities needed to sustain their convents (still including making their own clothing). They also expanded their ministries: They made altar bread, sewed altar linens and made wine for their chapels; cooked and provided housekeeping and laundry services for their convents as well as colleges, the homes of archbishops and seminaries; became nurses; attended school as students; became the teachers and principals of schools; and held other jobs such as librarians, tutors and porters.

What was her daily life like?
General – Sisters’ lives were still very structured — bells were used at the Motherhouse at Maria Stein to signal times for prayer, hours of adoration, meals and other activities. Sisters continued to make their own clothes and grow their own food. Silence was still observed at all times unless work required otherwise.

Prayer – Prayers remained at set times. Perpetual adoration was observed in shifts by all Sisters who were able.

What was her ministry?
Sisters continued to be teachers, housekeepers, cooks, nurses, principals and students. They also continued their work with the altar bread department and other activities related to their chapels; however, their ministries expanded even more: They became administrators, artists, consultants, deans of students, dieticians, food managers, registrars and sacristans; they also became involved in retreat ministry and other various ministries, such as prison ministry.

What was her daily life like?
General – Sisters’ lives were still very structured. Sisters continued to make their own clothing and grew some of their own food. More time was allowed for recreation, rest and exercise based on the norms of the day. Silence was still to be observed unless work or other activities required otherwise.

Prayer – Prayer remained at set times. Perpetual adoration was observed in shifts by all Sisters who were able.

What is her ministry?
Today, Sisters are still involved in education as students, teachers and principals. They continue to be involved in local churches and chapels as chaplains, spiritual directors, pastoral associates and liturgists. Many Sisters are now members of various boards and are directors or managers of organizations; they are also involved in various ministries as volunteers.

What is her daily life like?
General – Sisters’ lives and schedules are dictated by the needs of their ministries, appointments and other commitments. Most Sisters purchase their clothing and food. Silence is observed at each Sister’s discretion.

Prayer – Prayer takes place daily, but at Sisters’ discretion. Perpetual adoration is no longer observed due to the lower number of Sisters; however, Sisters observe hours of adoration when they are able.

Language – English, Spanish, some Latin (for prayers or Mass)