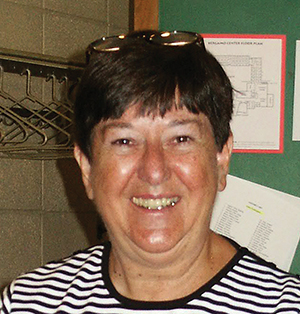 At Regis Jesuit High School in Aurora, Colorado, an award has been established that will honor faculty members who exhibit “deep faith, love, devotion, humor, patience and limitless zeal for teaching.”

It also honors “an individual whose commitment exemplifies the Magis” — a concept central to Jesuit philosophy which means to do more, for Christ and for others.

And it bears the name of the retired faculty member who embodies all of those qualities: Sister Benita Volk.

“Sister Benita was my senior English teacher 30 years ago, before she was my colleague and fellow English teacher,” said Tim Bauer, assistant principal for faculty and curriculum at Regis Jesuit Girls Division. “It was quite a privilege for me to acknowledge, in a lasting way, her impact on my and so many others’ lives.”

The award’s first recipient, Mark Onstott, was honored May 4 at the school’s Underclass Awards Ceremony, where approximately 500 students, 50 faculty and staff, and 100 parents were in attendance. Onstott teaches Competitive Speech and Debate, Theatre, Interpersonal Communications and regular Speech and Debate. He also coaches the competitive speech and debate team.

“I was very honored to not only receive the award, but also to be the first recipient,” Onstott said. “I am humbled to be considered in the same league when it comes to teaching as Sister Benita!”

Sister Benita (M. Denis Anthony) retired from Regis Jesuit in 2011 after serving as an English teacher, department chair, retreat director, literary magazine moderator and National Honor Society adviser. “Most importantly, though,” Bauer said, “Benita acted as a mentor and guide for generations of teachers and students.” She worked at the school from 1982 to 1990 and again from 2004 to 2011.

“I was both surprised and delighted when the Sister Benita Volk Award was established,” Sister Benita said. “Surprised because I’ve been retired since 2011 and wasn’t expecting anything, and delighted because every year when the award is given to a faculty member at Regis Jesuit High School Girls Division, my time there will be remembered and honored.”

Jamie Dawkins, chair of the English department at Regis Jesuit Girls Division, said Sister Benita “was (and continues to be) a wonderful friend and mentor. She was one of the first English teachers at our school and practically built our British literature and poetry curriculum. She served as a mother and guide to us young ones as we started our careers. I am so lucky to have little treasures of hers in my classroom — most notably her plaque that says ‘Poetry is Prayer’ — and not a day goes by that I don’t recall a nugget of wisdom she shared as she shepherded me through my first years of teaching. This honor is much deserved!”

Originally from North Dakota, Sister Benita entered the Sisters of the Precious Blood community in 1960 and taught grade school until the early 1970s, when she began teaching high school English in Denver. In 2011, Sister Benita was the recipient of the St. John Francis Regis Award, an outstanding service award at Regis Jesuit. She has also published a book of poetry, Leaning Toward the Invisible, which is available by contacting Sister Linda Pleiman.

“I love literature,” Sister Benita said. “It’s such a joy to share that with young people and, every once in a while, see someone get excited about literature also.”