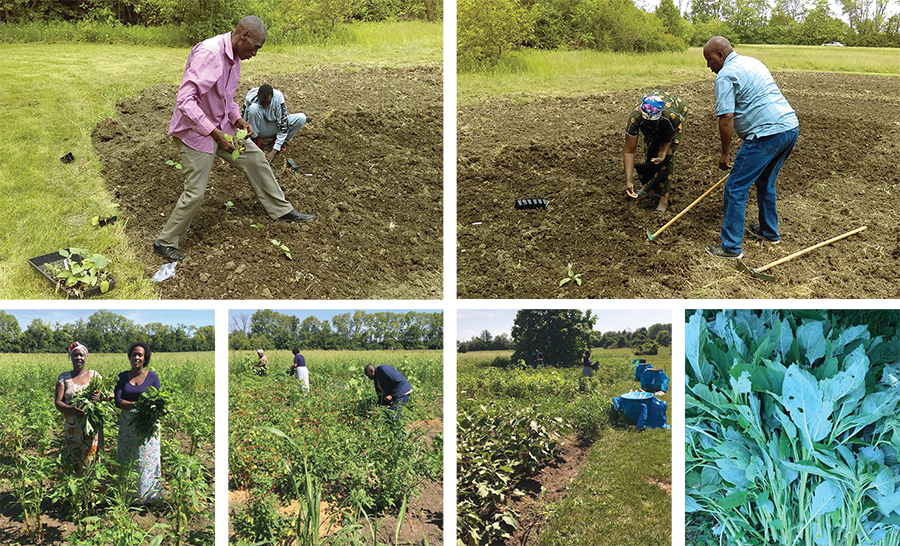 Top row, Nehemiah, who works in the garden, said the group enjoys “the chance to interact, share and encourage one another.” Bottom row, members of Dayton’s Congolese community work in the garden along Turner Road and display some of their harvest.

Red tomatoes, green cucumbers, golden butternut squash, white African eggplant: A plot of land near the Precious Blood Sisters’ administrative building bursts with color throughout the summer. Several months ago, novice Sister Mumbi Kigutha conceived of a project which would turn this piece of land into a bright, abundant vegetable garden. And with help from individual Sisters and members of the community, that idea has become a beautiful crop of fresh, organic vegetables for local families.

“I have never gardened in my life,” Sister Mumbi said. But while living in the U.S. a decade ago, Sister Mumbi — a native of Kenya — realized that she had traded a traditional diet rich in vegetables for the prepackaged convenience foods and fast food ubiquitous in this country. She was also walking less and driving almost everywhere.

“Growing up with parents who were a medical doctor and a nutritionist, I knew what I had done was not right,” she said. So when she arrived in the U.S. last year to join the Precious Blood community, “I was very conscious that I was going to lose the weight that I had added in America the previous time and stay at a healthy weight.”

Sister Mumbi’s own experience was at the forefront of her mind when she began working with the Congolese community in Dayton. “I could see it within weeks of them settling down. I would go to their homes and be offered pop all the time. I’m offered cookies all the time,” she said. “I kept telling them, you need to eat better, but can they really afford to eat better? So I thought, if we could have a place where they could grow indigenous vegetables and lower the cost, that would help.”

Sister Mumbi became acquainted with members of the Congolese community in Dayton through her volunteer work with Catholic Social Services of the Miami Valley, which has helped resettle families coming from refugee camps around the world — where some new Daytonians had lived for 10 to 20 years. For some members of that community, working in the garden has provided a time for fellowship, as well as an opportunity to grow items not easily found in the area. African eggplant, for example, is a small, white fruit that can be eaten either raw or cooked. Sister Mumbi said it did well in the garden this summer. “It’s something we also don’t eat in Kenya,” she added. “But the people from Congo are crazy about it.”

Other crops didn’t fare as well — some were eaten by rabbits or deer — but the project is a learning process. “I think what helps me is that I’ve never been scared of taking risks,” Sister Mumbi said. “Things could go very wrong, but they could also succeed beyond expectation, and I think that set me free. And I got that same support from my leaders. I work with Sisters Patty Kremer and Linda Pleiman, and they kept reassuring me, saying, ‘Let’s see how it goes. If we don’t try, we will never know.’”

Some of the Congolese men and women who work in the community garden spoke with Sister Mumbi about their experience. “Fresh, organic vegetables are good for our health and allow us to eat food that we are familiar with,” said Kabwona.

Makombe added, “We are grateful to the Sisters of the Precious Blood for the opportunity to have this garden, as most of us were farmers in Africa.”

Truly a community effort, the garden was also possible thanks to help from Jerry Rowe, who rents and farms CPPS farmland, who plowed the garden plot. A. Brown & Sons Nursery — the family of Sister Barbara Brown — tilled the land. The Salem Heights maintenance crew cut the grass surrounding the garden, constructed a tool shed and set up water barrels. The Precious Blood community — including this year’s jubilarians, who donated their gift toward garden needs — provided financial assistance.

Sister Mumbi said that, in the future, she hopes the garden will continue to grow not only in size, but also as an avenue toward peace and reconciliation. “My dream is that in five or ten years’ time, that garden will be a UN,” she said. “We’ll not just have people from various African countries; we’ll have Iraqis and Syrians, and anybody else who might be resettled in Dayton. I would love to see people there together. The bigger cities have succeeded in that.”

Ultimately, a basket of cucumbers or African eggplant can go beyond providing a healthy and delicious meal. The efforts behind that harvest represent “bringing hope where there is no hope,” Sister Mumbi said. “For refugees who have lost their entire families, who thought their spouses were dead and were reunited years later, who had given up on everything before coming to America — and to see them at a baby shower, dancing and laughing. For me, that is the hope.”