God Did It: The Joy of Serving

The Sisters of the Precious Blood have constantly dedicated themselves to the needs of their communities since their founding in 1834 by Mother Maria Anna Brunner. Cooking and food service were no exception. The following article shows the dedication of Sisters, past and present, who worked to keep not only their fellow Sisters fed, but also seminarians, school students, priests, retreatants and many more.

This article is dedicated in loving memory of Sister Verlina Mescher (1935-2020), at left, dressed as Mother Brunner in 2014. Sister Verlina always said “God did it, honey” when talking about her ministry.

In the early 1800s, Mother Maria Anna Brunner began a tradition of serving her neighbor through food before she founded the Sisters of the Precious Blood in 1834. When she baked bread for her family, she put aside a loaf, called Almosenbrod (almsbread), for the hungry in her small Swiss village.

The early Sisters in Germany and the United States lived a pioneer lifestyle. The diet of the Sisters was simple and sometimes meager. They ate cornmeal and potatoes and often went without bread so the orphans they cared for would not go hungry. They tilled large fields and raised their own cattle and sheep. Their convents were largely self-sustained, meaning the Sisters made or grew all necessary food, clothing and other needs. As the Sisters grew in number in the United States, they began to delegate tasks. Some would take care of orphans, some would teach, some would sew, some would garden, some would cook, and some would clean.

By the 1920s, the Sisters had been in ministry in the western United States for over 20 years. In San Luis Rey, California, a school for boys had been built in 1917. By 1927, the building was in such disrepair that the Sisters had to eat with open umbrellas to avoid the leaks in the roof. A new school, dedicated to St. Therese the Little Flower, opened in 1928 and mitigated many of these problems.

In 1939, Mother Magna Lehman (Mother General from 1936 to 1948) became instrumental in creating the modern food program the Sisters know today. She began an education program for Sisters working in the domestic arts. She was passionate about the Sisters’ health and well-being and saw to it that professionally trained dietitian Sisters took over the processes of purchasing and preparing food.

In the early days of the mission in Chile in the late 1950s, Sisters relied on locals to help them learn where to purchase food and how to prepare meals. Although these times were difficult, the Sisters became accustomed to the new food and culture.

The Sisters who worked in food service over the years were instrumental in the self-sustainment of convents, as well as in the nourishment of not only their fellow Sisters, but also priests, retirement home residents, schoolchildren and personnel, and those making retreats. Five retired Sisters told their stories about their ministries in food service.

Sister Verlina Mescher remembered her first ministry, at St. Gregory Seminary in Cincinnati: “In 1955, my first mission out, I cooked for almost 400. I was in charge at 21!” She said of her five-year experience, “It wasn’t me; it was the Lord. I’m telling you; it was the Lord.” During that time, the kitchen burned. “About eight firetrucks came. There were big sparks, wood sparks would fly over to our building. Then we made a temporary dining room in the science department.” She was in four different kitchens during her five years there. “You know, at St. Greg, we had to roll out 55 pies in a morning. And you couldn’t just go out and buy it, so we made all of it. And boy, we used to roll like crazy!” Sister Verlina also worked in Dayton at Fatima Hall and Salem Heights, as well as in Denver, Colorado, at St. Thomas Seminary.

Sister Dorothy Koenig was in food ministry for 29 years. She worked in big kitchens for seminaries at St. Gregory in Cincinnati, St. Charles in Carthagena, St. Thomas in Denver, and Brunnerdale in Canton. Many times, she cooked for 400 to 1,000 people three times a day. She likened it to running restaurants. Much like the pioneer Sisters before her, she helped with pasteurizing milk, grading eggs, and directing student workers to portion out larger cuts of beef or pork. “I enjoyed it,” she said. During her time in Collegeville at St. Joseph College, Sister Dorothy said the food service functioned as an assembly line, with each Sister in charge of a different task. Laughing at a memory, Sister Dorothy said that one year at Easter, “the students went home and the Sisters relaxed for a while!”

Sister Jeannine Kloeker, in food ministry for over 35 years, says that “there were people who helped me learn along the way.” She was a dietary supervisor at Maria Stein Retreat House for 12 years. She said, “I enjoyed that. In the early 1980s, Sister Ritamary Bulach and I went to St. Louis four summers in a row for two weeks in June, and we got our dietary manager’s certificates.” Sister Jeannine was also the assistant director of St. Leonard’s in Centerville, Ohio, for nine years. “That was a whole new experience for me because I was away from a convent working with lay people. That was a whole new ballgame for me.” She says of her ministry: “You basically just did it. You worked until you got finished. But my main objective was, I wanted to make sure that the food was good, and it was hot, and no matter what it took I was always willing to go back and get some more if I ran short or needed help.”

From an early age, Sister Nancy Recker knew she did not want to be a teacher. “I learned that the Sisters of the Precious Blood worked for priests, and I thought it would be so neat to work for those who work for God.” After joining the Congregation, Sister Nancy earned a Bachelor of Science from the University of Dayton and a certificate in dietetics. She remembers sitting at the phone waiting to hear if she had secured the internship she wanted for her dietetics program. When Good Samaritan Hospital in Cincinnati called, she says, “I was so excited. I said yes right away because I wanted to go to a Catholic hospital.” That began a long career for Sister Nancy, including positions at Kneipp Springs in Rome City, Indiana; Timken Mercy Hospital in Canton, Ohio; Brunnerdale Seminary in Canton, Ohio; Maria Stein; and the Sisters of St. Francis in Tiffin, Ohio. After her time as a dietitian, Sister Nancy worked as a hospital chaplain and pastoral care minister.

Sister Ritamary Bulach always did a lot of baking at home and loved to cook. She said, “My first job was cooking for our retired Sisters at Lourdes Hall in Dayton, Ohio. I loved it there. I learned so much from our older Sisters.” She also worked at Salem Heights and the Maria Stein Retreat Center, where she mainly worked in housekeeping but helped with serving and dishes when a retreat was in session. Her longest time in a position was at the Maria Joseph Center where she cooked for 31 years, “and I worked as a part-time diet technician, part-time cook for three of those years.” She said, “I just liked to cook. It didn’t make any difference what it was.” 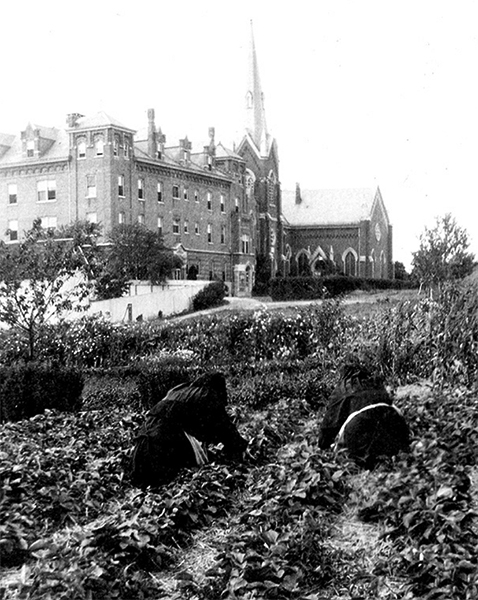 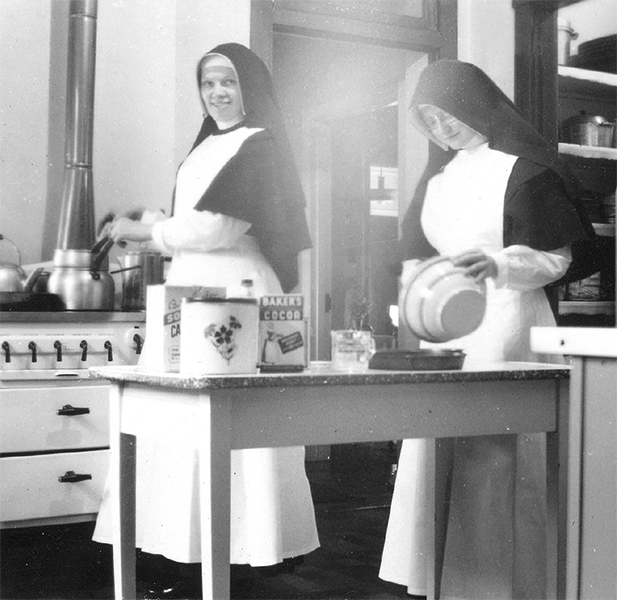 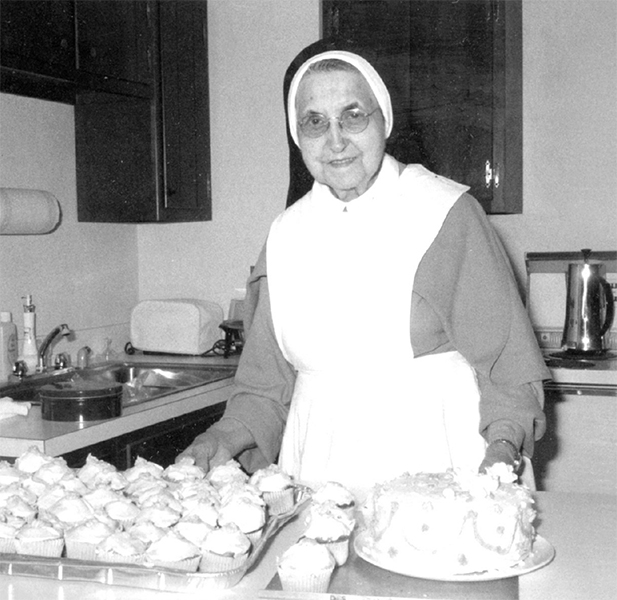 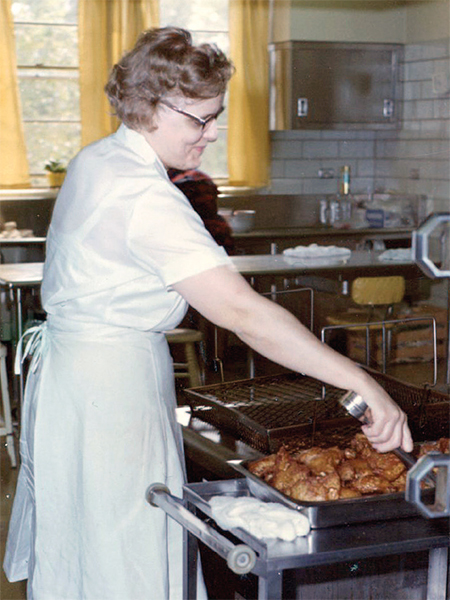 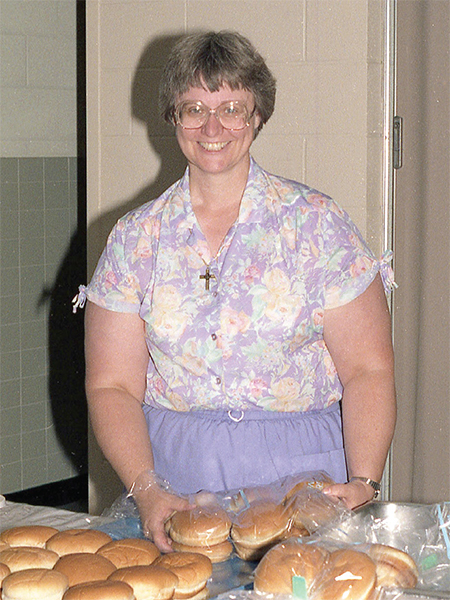