When Sister Joan (M. Christine) DeChristopher attended a recent event at Nativity parish in Cincinnati, she had no idea she soon would be the center of attention for about 600 attendees.

At a Feb. 26 brunch celebrating the parish’s 100th anniversary, pastor Father Paul DeLuca began to talk about this year’s recipient of the parish’s “Lighting the Way” award. During his remarks, he mentioned that the award recipient had served as grand marshal for the Golf Manor, Ohio, Fourth of July parade last year.

The award is given to “individuals who have helped us ‘light the way’ as members of the body of Christ,” Father DeLuca said, adding that Sister Joan stood out as an appropriate choice for the award “because of her longtime connection to the parish, her kindness, generosity and Christ-like life.” The recipient receives a silver or bronze coin with a shield and star on one side and an image of Nativity church on the other.

Father DeLuca also said that Sister Joan “has long been a significant member of both the parish and the civic community. Her prayers for the needs of neighbors, her ear to listen to those sharing their troubles, her care for the sick and those in need are just some of the many ways she reflects the life of Christ. Sister is known by many and greatly loved and respected in this community. We are grateful for her witness to Christ, her prayers and unceasing care for our community.”

Since Nativity parish began giving the “Lighting the Way” award in 2010, 16 bronze and seven silver coins have been presented. Sister Joan received the silver coin, which is the highest honor presented by the parish.

Sister Joan is a daughter of Nativity parish and grew up in the nearby village of Golf Manor. She received the “Lighting the Way” award for a life of ministry that began in 1954 as a young Sister teaching kindergarten in Fort Wayne, Indiana. After 17 years of teaching, she earned a master’s degree in religious education and spent a decade in that field before moving on to clinical pastoral education and becoming a chaplain.

When a chaplaincy job came open at Children’s Psychiatric Hospital, “something inside me just leapt when I heard ‘children,’ because I loved, loved teaching,” she said. For six years, she ministered to children between the ages of 4 and 17, most of whom had suffered sexual abuse. “I’m not a morning person, but I couldn’t wait to go to work in the morning. I loved that job,” Sister Joan said, citing the children’s resilience as a constant source of inspiration.

Sister Joan expanded her chaplaincy ministry at Franciscan Behavioral Hospital. In 1999, she “retired” for the first time.

After six years of retirement, the administrator at St. Margaret Hall, a nursing and assisted living facility in Cincinnati, called Sister Joan to ask if she would work in pastoral care and “be a presence among the residents,” Sister Joan explained. “That was a real privilege. No one ever asked me to come to work before.” At the age of 71, she wasn’t sure if she wanted to go back to work again, but she made up her mind to go — and stayed for seven years.

At St. Margaret Hall, Sister Joan established and developed the facility’s pastoral care department and, among her other duties, trained archdiocesan seminarians and Dominican novices in pastoral care for the elderly. In training, she imparted simple but deeply meaningful lessons, such as how to knock on the door gently and call the resident’s name, how to address residents, how to use family photos as conversation starters, and how to build relationships with the residents.

She retired again in 2012; but even then, Sister Joan continued an active life of ministry. She scours estate sales and garage sales for furniture and buys inexpensive pieces to take home for cleaning and repair. She then consigns them at Legacies, a Cincinnati resale store that donates its proceeds to the Cancer Support Community of Greater Cincinnati and Northern Kentucky.

“That is her post-retirement ministry, and I thought it was just wonderful that she did that,” said Sister Mary Garke. “It uses her talents very well.”  “I just like to keep busy,” Sister Joan said.

After looking back on teaching, chaplaincy and even fixing up old, broken furniture, Sister Joan said she has a lot of good memories. “I loved everything I did,” she said. “I really did.” 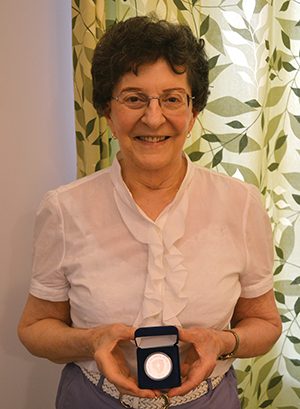