On the evening of May 2 Salem Heights hosted the Organizing for Action: Spring 2017 Fellows Capstone Event. The theme for the event was “Climate Change: How Will It Affect Us?” Sister Jeanette Buehler coordinated the evening.

Four presentations wrapped around the topics of climate change’s impact on the economy, on health care and on refugee resettlement, and Ohio State University’s educational efforts toward agricultural needs and ways to increase production. The presentations focused on the effects of the increase of water due to polar cap melting. An often-overlooked effect is the displacement of islanders — some 400 million to 750 million — whose habitats would be inundated. Where will they go? Which countries will welcome them?

When asked what could be done now, the panel suggested an awareness of changing weather patterns — the hotter and drier summers, the warmer and wetter winters — and the effect on food production and distribution; the outbreaks of disease and health issues related to climate and the personnel and money that will be needed to combat such; and the need for each of us to live in a sustainable manner, that is, buy what you need, use what you buy, waste little and replace what you can.

In the last minutes, participants were strongly encouraged to keep a watchful eye on the EPA (Environmental Protection Agency) and its actions. Contact your legislators, House representatives and senators, regarding matters on which you want action.

This was a very educational, motivating and enriching event! 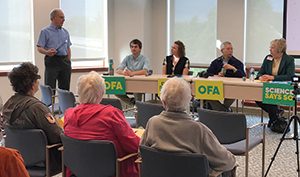