As Pope Francis has said, “Each vocation in the Church has its origin in the compassionate gaze of Jesus, who forgives us and calls us to follow Him.” Helping young people discern that vocation — whatever it may be — is the goal of the Precious Blood Sisters’ new vocation ministry coordinator, Jenna Legg.

Legg has served in ministry for almost 10 years, working with teenagers and young adults in campus ministry at the University of Dayton, Wright State University and Catholic Central School in Springfield.

As a campus minister at Wright State University, she became acquainted with Sister Marita Beumer, who occasionally stopped by to drop off vocation flyers. “And then one day, she told me that she’d nominated me to join the Precious Blood vocation committee,” Legg said. “I felt honored that she had nominated me, so I thought I would try it out.”

She served on the committee for the past two years. The congregational Council recently decided to refocus vocation discernment efforts, replacing the committee with a full-time vocation ministry coordinator. “It seemed timely to hire a young, vibrant person to be present where we are, for the most part, no longer. That is, with young adults who are discerning where God is calling them. Through Jenna we hope to offer the vowed life as a viable option among many for living a healthy, holy life in service to others,” said Sister Joyce Lehman, President of the Congregation. “Jenna’s successful experience working with young adults, her love of engaging them in the deeper conversations about their lives and her appreciation for religious life seemed to make her the perfect candidate for this position.”

Legg grew up in Mason, Ohio, and holds bachelor’s degrees in religious studies and psychology, and a master’s in theology, all from the University of Dayton. Between her undergraduate and graduate studies, she spent a year in volunteer service with the Capuchin Franciscans in New York.

She said some people might be surprised to learn that a married layperson is heading up the Congregation’s vocation ministry, but she sees her new role as a seamless transition from her previous campus ministry work.

“I want to help people, especially young women, discern a vocation, whatever that is — married life, single life, religious life as a part of our Congregation, or religious life with another community,” she said. “I can talk to young adults; that’s what I like to do. I like to help them figure out what in the world God is calling them to,” she said.

After just a few days in the office, Legg left for Chicago, where she spent two weeks at the National Religious Vocation Conference, learning the ins and outs of being a vocation coordinator. She studied alongside vocation directors from all over the world and a variety of religious congregations, networked with fellow vocation ministers and began brainstorming and developing a support system.

As she continues to settle into her new role, she is taking time to interview Sisters in an effort to get to know them, and to understand Precious Blood Spirituality so that she can articulate it to other people. She has also created vocation-specific social media accounts on Facebook, Instagram and Twitter and has reached out to local religion teachers, campus ministers and youth ministers.

“I want to allow high schoolers, college students and young adults to meet the Sisters, whether virtually or in person,” she said. “Our Sisters are doing so much good work, and I want to share our Sisters’ stories and their ministries — because when people know about their work, then they’ll start asking questions.” 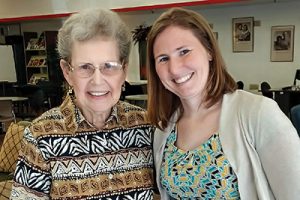