The Sisters of the Precious Blood Council traveled to St. Louis in August for the annual assembly of the Leadership Conference of Women Religious. Council is composed of Sisters Joyce Lehman, President; Ceil Taphorn, Vice President; and Councilors Nancy Kinross, Patty Kremer and Linda Pleiman.

Nearly 800 LCWR members, associates and guests attended the conference, whose theme was “Being in the Presence of Love: The Power of Communion.” The assembly focused on the urgent need to foster communion and connection in a world plagued by polarization, division and fractures of communion.

“We found the assembly to be very inspiring and nourishing,” Sister Ceil said. “The president’s address and all the keynote speakers were excellent — they gave us much to think about. It was also great to reconnect with other Sisters who are in leadership from numerous congregations throughout the U.S. and several other countries.”

The assembly unanimously recommitted to its 2016 assembly resolution, which states:

In the presence of constant and painful reminders of the deep roots of racism in our country, we the Leadership Conference of Women Religious reaffirm the 2016 assembly resolution and pledge to go deeper into the critical work of creating communion, examining the root causes of injustice and our own complicity, and purging ourselves, our communities and our country of the sin of racism and its destructive effects.

Following the passage of the resolution, the participants demonstrated their commitment by leaving the meeting area and walking outside to the steps of St. Louis’ Old Courthouse, where Dred Scott sued for his freedom in 1846. There, the nearly 800 members stood in silent prayer to remember victims of racism and to pray for the systemic elimination of racism throughout the country and the world.

While in St. Louis, Council also gathered with other Precious Blood leadership teams for reconnection, stories and laughter.

Following the assembly, Sister Joyce attended the International Union of Superiors General annual meeting. Attendees were the major superiors of congregations with headquarters in the U.S.

Highlights of the LCWR assembly, along with keynote addresses and other materials, are available online at lcwr.org/calendar/lcwr-assembly-2018. 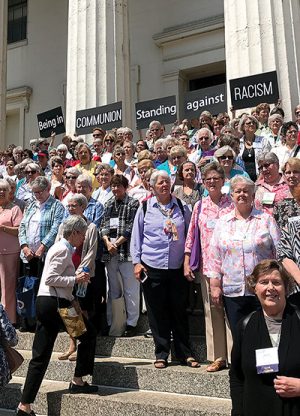