Our Lady of the Precious Blood comes home after 35 years

On Friday, July 13, the statue of Our Lady of the Precious Blood — which had been in front of the Maria Joseph Nursing and Rehabilitation Center from the time it was our motherhouse — was moved to Salem Heights. The present MJC administrator, Nick Anderson, understood the statue’s significance for us and was willing to let it go. We offered, and he accepted, the statue of Mary that has been on what had been the main entrance to the Maria Joseph Home for the Aged since we moved there in the early 1980s. It had been outside the library window on the second floor.

Since nothing ever goes smoothly, we were not surprised when the statue would not let go of its pedestal (remember, it was Friday the 13th after all). So instead of just the statue making its way to Salem Heights, both statue and pedestal were moved. A new pedestal is on order for the statue of Mary which is now in front of MJC.

You may notice that the picture of Our Lady of the Precious Blood at Salem looks brighter. She was power washed along with the east-facing side of the building. The entire Salem Heights is undergoing a much-needed facelift of power washing, tuckpointing, foundation repair and cupola repair and painting. Since the inside is already so bright with the joy and hospitality of our Sisters, and the grounds are so carefully tended, it seemed timely to tend to the “skin” of the building, making sure it was in good repair for the future. 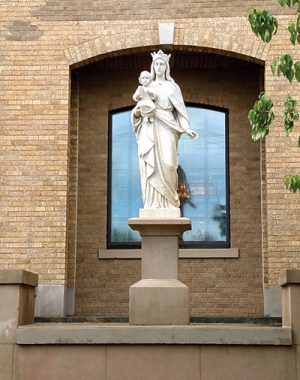 Our Lady of the Precious Blood in front of the library at Salem Heights.