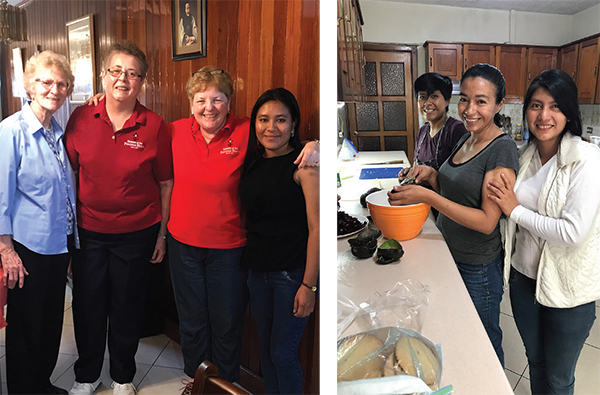 On January 15, 2007, nine teenage girls from various areas of Guatemala began an adventure that would change their lives forever. A new school for Mayan girls, the dream of Sister Marifé Hellman, had become a reality and these young women were the first students. The goal of Holy Mary of the Most Precious Blood School of Integral Formation for Church Leadership, funded by the Sisters of the Precious Blood and private donors and under the direction of Sister Marifé, was just what its title indicated — a place to train young Mayan women for leadership in a church and society in which women were often not educated, so their voices were typically not heard. They would return to their rural villages after completing the equivalent of a high school education and become leaders in their communities.

The school is located in a peaceful, rural area about 45 minutes north of Guatemala City. In 2014, the school year began in a new building that would house up to 32 students. Some of the graduates wanted to continue their education at the free university in Guatemala City, but had no place to live. Their families were hours from the city. So in September 2015, Sisters Terry Walter and Joyce Kahle, who had lived in Guatemala previously, returned to Guatemala with the blessing and support of the Precious Blood Congregation and established Casa Sofia, a safe residence where the women live without cost while continuing their education. They have part-time jobs to cover their transportation and personal items while donations help with extras such as medical needs and computers. Currently there are nine students at Casa Sofia studying social work, education, nursing, theology and agronomy.

Casa Sofia is situated in a parish with the Missionaries of the Precious Blood. Some young women in the parish, along with some of the students in Casa Sofia, expressed an interest in learning more about religious life. A “Come and See” day was held at the house in February 2019, with the theme “How to Listen to God’s Call to Religious Life.” This was the second such event at Casa Sofia, the first being in March 2017. Twelve young women participated and three Precious Blood Sisters visiting from Dayton helped to facilitate the day with sharing stories, prayer, activities and lunch. The women responded very positively to the day and some are continuing contact with Sisters Terry and Joyce.

Faith deeply marks Guatemalan society, above all through popular, traditional and conservative religiosity. Many people think that God will solve the difficult social, political and economic realities in the country. “Si Diós quiere” — “if God wants it” — is a common expression. Most religious congregations here are conservative and want girls to enter right after high school so they can train them for their own ministries. The young women who came to our vocation day were mostly college students with more progressive thinking, and they seemed to appreciate the fact that the Precious Blood charism is based on a spirituality, not a particular ministry. Perhaps some of these women will want to be members someday — si Diós quiere!

The logo of the Extraordinary Missionary Month October 2019 is a missionary cross where the primary colors refer to the five continents. The Cross is the instrument and direct sign of communion between God and man for the universality of our mission, and through its vibrant colors, a sign of victory and resurrection. The world is transparent because the action of evangelization has no barriers or boundaries, it is the fruit of the Holy Spirit. Christian charity and the world transfigured in the Spirit overcome distances and open the horizon of our minds and hearts. The words Baptized and Sent next to the image indicate the two characteristics of every Christian: baptism and proclamation. (Source: Pontifical Mission Societies in the United States).