In recognition of the fact that St. Christopher School in Vandalia has been operating as a Catholic school for 60 years, the present school staff and pastor, Father John Tonkin, invited the Sisters of the Precious Blood to celebrate with them at the 8 a.m. school Mass on November 1. Four Sisters, all of whom previously taught at St. Christopher, attended the Mass.

Among the group of Sisters was Sister Regina Albers who, along with Sister Evelyn Monnin and Sister Paula Wellman, opened the school in 1959 under the pastor, Father Aufderheide. Another Sister present at the Mass was Sister Mary Ellen Lampe, who taught seventh grade from 1963 to 1965. She was followed by Sister Anna Maria Sanders, who taught at St. Christopher for one year, 1965-1966. The fourth Sister was Sister Lou Ann Roof, who served as principal from 1968 to 1974. Unfortunately, Sister Patty Kremer was out of town at a conference and unable to attend. Sister Patty served as principal at St. Christopher for 22 years. Other Precious Blood Sisters who taught at the school but were not able to attend the Mass were Sisters Alice Schoettelkotte, Charlene Heidenreich and Florence Seifert.

Since it was All Saints’ Day, the opening song was the Litany of All Saints. During the song, about 40 young students, dressed as various saints, processed into church and stood facing the congregation. Parents and/or grandparents must have been busy putting together the “saintly outfits.” It was heartening to see such earnest effort, creativity and respect for the saints. At the homily time, Father John had each child tell which saint they were portraying.

There are now 291 students enrolled in kindergarten through eighth grade at St. Christopher. The Sisters of the Precious Blood were recognized and thanked for their years of service before Mass, during the homily and at the end of Mass. Father presented each Sister with a bouquet featuring a large decorated mum. Each Sister also received a pack of “thank you notes” written and decorated by the children and/or teachers. 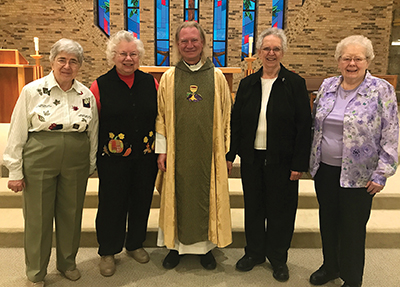