Precious Blood Sister Anne Schulz has led the school as principal since its founding. It now serves 535 students in kindergarten through eighth grade.

“What an honor for the MTCES family!” Sister Anne said. “It takes a whole village to raise a child, and it takes a whole community to have a successful school. MTCES has worked so hard to keep its standards high and earn the Blue Ribbon award.”

Nationwide, 300 public and 49 nonpublic schools received the honor this year. MTCES is one of just 16 Blue Ribbon Schools in Ohio.

After achieving scores in the top 15 percent in the nation in reading (or English language arts) and mathematics as measured by a nationally normed test, Mother Teresa staff and board members, led by junior high English teacher Amanda Ocariz, completed an extensive application process. The school was then nominated by the Council for American Private Education (CAPE) to the Department of Education.

“While MTCES has had many notable achievements in its short existence, the 2018 National Blue Ribbon award is recognition of tireless effort from faculty, staff, students and parents since the beginning,” said MTCES Board Chairperson Brian James. “Not bad for an independent school that just two decades ago consisted of only 20 kindergartners and a teacher in a church basement! On behalf of the MTCES board of trustees both past and present, congratulations and a sincere thank you to those groups for all you have done to make it happen.”

Recognition ceremonies, as well as presentations and small group discussions, were held Nov. 7-8 in Washington, D.C. 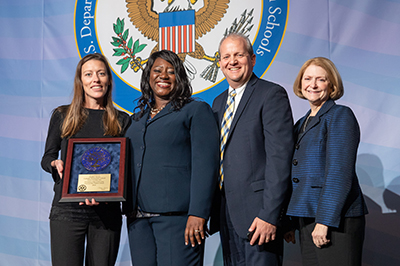 Mother Teresa Elementary School was represented at an awards ceremony in Washington, D.C. by Amanda Ocariz, junior high English teacher (left); Brian James, MTCES board president (second from right); and Susan Gibbons, superintendent and director of educational services for the Archdiocese of Cincinnati (right). The award was presented by Aba Kumi, director of the National Blue Ribbon Schools Program (second from left). Photo by U.S. Department of Education.