A Reflection from the West

I am in the West in the time of pandemic. As a Korean in the area and Congregation where the majority of people are Whites and with their culture domination, I was struggling to discern if I can be an effective and sufficient minister to serve God and God’s people in that context after all. I surrendered to God wherever God leads me. Then when my novice director suggested, toward the end of my first-year novitiate, that I go to California for my apostolic year of novitiate with a possibility to do ministry for Korean Catholics in a diocese, I felt my heart was lifted and filled with joy toward serving God and God’s people. Thinking of California where diverse people with their multiple cultures co-exist together, made me feel much at ease in breathing. I thought that I can be accepted as one of them. I would still be different from them, but we could co-exist together equally yet uniquely. And there are more people like me in California. When I surrendered myself, God surprised me and showed me the way.

The external social situation seemed to be getting worse and worse due to the COVID-19 pandemic. Our initial plan to travel to California to have an interview with Bishop Barnes of the Diocese of San Bernardino had been canceled due to the pandemic. But the pandemic never was able to discourage me from going to California for the possible ministry. Finally, I was able to have a virtual interview with Bishop Barnes. In the interview with him, I was so impressed by his care of diverse cultural groups in his diocese and his efforts to serve all the people of God, especially the poor, the weak, the marginalized, women and children. He shared with me how he cares for the Korean community, with stories of his experiences. The majority of Korean parishioners have difficulty in speaking and understanding English when they have formation programs offered by the diocese. So, he asked me to give those programs in Korean to the Korean community in his diocese. The diocese has formation programs for laity in English, Spanish and Vietnamese. And now, they have an additional language program in Korean. I felt that I met a living true pastor. I am so glad to work with him. I was longing for this moment of service since I got the degree of Doctor of Ministry from Catholic Theological Union in Chicago before entering the Congregation. In the chaos of the pandemic, I still see hope by the people who serve God and God’s people.

Since I arrived, I translated two formation programs for the Office of Worship to offer to the lay ministers in the liturgy: one for Readers and the other for Extraordinary Ministers of the Holy Communion (EMHC). And there will be more collaboration work with the Ministry Formation Institute of the diocese. On November 21, I gave a basic virtual formation workshop for the Readers in Korean. There were 25 Koreans registered for it. Although there were some technological problems, they were glad for the program that was delivered in Korean. One of the participants of the workshop later wrote a message of gratitude to the Diocese of San Bernardino and the bishop for having a Korean presenter for them on the formation program. I am also touched by their enthusiasm to learn more, which inspires and compels me to be a better presenter and more creative for the coming sessions. This is also a learning experience for me to be a better instrument of God. After giving the workshop, I thanked God and praised the goodness of God. Out of all the lacks and limitations in this time of pandemic and of myself, God has done great things for us.

This formation ministry in the Diocese of San Bernardino for the Korean community is a great opportunity for me to be aware of Precious Blood spirituality. As the country constructed by immigrants, the USA is naturally a country of diversity. With the people of diverse culture, language, and race, this country needs to accept the reality of who they are. Recognizing identity is a foundation of growth whether as a person, a group or a nation. I think that California is the state that recognizes and understands of their identity as a people of diversity and immigration. In this context, the Diocese of San Bernardino in California also pays attention especially to minority groups of people. Those first generations of immigrants are not very good at English and become isolated from English-speaking society. They struggle to be part of the bigger society, but find themselves being not fully Korean, and at the same time, not fully American. They are easily ignored, not recognized and accepted as who they are in that situation. They naturally turn to their own ethnic group for help and survival. If they are not attended and accepted as who they are, then they could become more defensive for what they possess as an important part of identity (whatever they learned from and connected to home), and could be tend to be more sarcastic toward those who they recognize as disregarding and ignoring what they have as who they are (language, custom, food, etc.) or toward themselves. Therefore, I think that this ministry of giving formation programs for laity in the participants’ own language is bridging them to the bigger church/society. In this case, my ministry can help Korean parishioners to see themselves as a people of God — not as an isolated group but as a part of the church in the bigger vision of the diocese. They are recognized by the bigger group (the diocese) as who they are (parishioners who have difficulty communicating well in English), with a Korean presenter (a bridge-builder/a liaison) in the formation program. This is an act of affirmation and respect to them — an acknowledgement that it is fine to be who they are. In this sense, I see myself doing the ministry of reconciliation and life-giving presence among people of God in the world.

The community life in Redlands is also an exciting part of my mission adventure. I live with Sister Hortensia from the Guardian Angel Sisters who is originally from Mexico and Sister Margo, a white American Sister of our Congregation, the Sisters of the Precious Blood. We share three different nations of origin with their cultures, languages and races, as well as two religious congregations. We are all new to each other. We are all bilingual with the common language of English. And we all work in the Diocese of San Bernardino in different departments. So, we have differences and commonality. We all have something to contribute for making our community as communion. We are all equally important, different, mature enough to express ourselves and to accept our limitations and weaknesses, and yet still vulnerable in a very unique way. We are still getting to know each other every day and learning from each other. I don’t say that everything is sweet. I say, we are ready to care for each other by accepting each one as she is, as well as who I am. So far, my experience of this intercultural community is great. Great, because it seems like we are willing to dance around together with moments of forward or backward steps, moments of turns left or right, moments of pause, and moments of getting closer or making distance but never far away in the rhythm of the music of God. Intercultural community is our ministry in this sense, because I see the aspects of re-conciliation[1] between differences of people as culture and the life-giving presence of living the communion in God in the intercultural community life.

With all these experiences, when I reflect on the trip to San Luis Rey two months ago with Sister Ann Clark and Sister Margo Young, it gives a very special meaning to me. In 1913, our Sisters accepted the ministry to open a school in the San Luis Rey mission field, which was requested by Franciscan Father Peter. “By September 10, the date of the opening, twelve boarders and several day pupils from some Spanish families in the vicinity were enrolled. It was indeed a small beginning without presage of future prosperity.” (Not with Silver or Gold, p.330) The plaque on the wall at the door of the parish center, which was our C.PP.S convent before, shows the history of the building. Standing in front of the building, I was initially touched by our Sisters’ stories that connected to the part of the building which was novitiate. And now, as I am here in the midst of where diverse people live together, I begin to dream that there will be more vocation to have a formation house in the land of inclusiveness, and more vocation from all over the world to share Mother Brunner’s vision of love beyond our own family,[2] nation, language, privilege, prejudice and belief system. So, we may become the presence of life-giving and re-conciliation beyond our community. I dare begin to dream in the West where I glimpse the sign of the Holy Spirit.

[1] Conciliation in the Oxford Dictionary means “the action of stopping someone from being angry: placation” and “the action of mediating between two disputing people or groups.” With this definition, I would say that re-conciliation means again and again we pause from the attitude of being I-am-always-right-and-you-are-not and build bridges between people of difference. When we live this way in the community, we allow the Holy Spirit to mediate between us and God as well as among members of the community.
[2] One of my favorite stories of Mother Brunner is that she gave cream of milk away to the poor children instead of her own children. 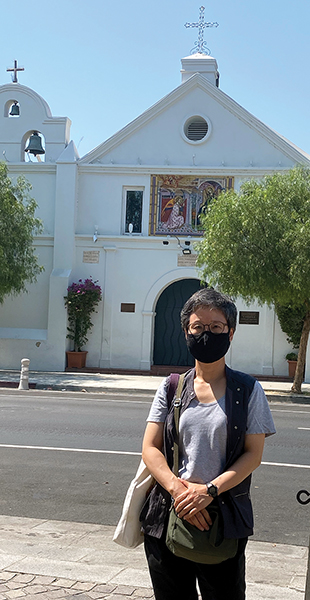 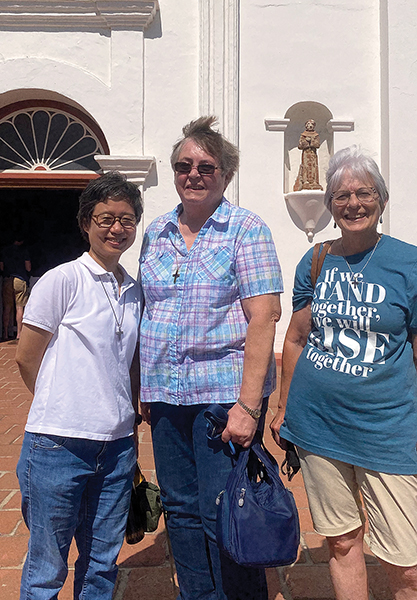 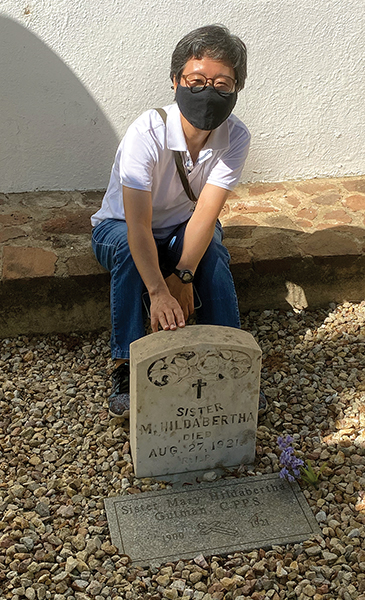