On September 26, approximately 250+ people gathered to learn more about the all-important subject of human trafficking. The main focus of this conference was how the transportation industry in the U.S. is a major player in the trafficking of human persons, most especially young women. Truckers in particular can be a mighty force in identifying and helping to rescue people caught up in the web of trafficking.

TravelCenters of America is the first major trucking company to understand that if their drivers are educated and trained to be on the lookout for signs of trafficking, they can be an all-seeing presence that discovers and disrupts human trafficking networks as they criss-cross the roads of our country.

The sponsors’ generous contributions made this conference possible and helped to further raise the awareness of hundreds of people around this very important topic.

The keynote speaker at this event was Kendis Paris, executive director and co-founder of Truckers Against Trafficking. She is an Ashoka Fellow, recognized by Ashoka, a global organization that identifies and invests in leading social entrepreneurs.

The Sisters of the Precious Blood provided a table for nine folks to attend. Four religious women and five laywomen shared this table. Representing the Sisters of the Precious Blood was Sister Mary Ann Mozser. One Franciscan Sister, two Incarnate Word Sisters and five medical personnel from St. Vincent Charity Medical Center rounded out the group. Much was learned at this conference, and all attendees were most appreciative of the opportunity to hear more about this very important topic. 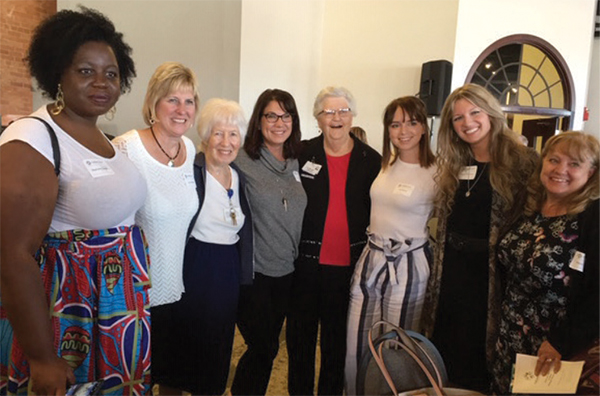 Left, Sister Mary Ann Mozser (fourth from right) pictured with some of the women from St. Vincent Charity Medical Center, who were seated at the table reserved for the Sisters of the Precious Blood; more than 250 people attended the event held in downtown Cleveland; contributed photo.