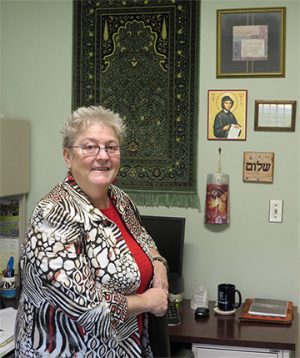 In addition to a Bachelor of Arts degree in education from Wright State University, Sister Karen also holds a master’s degree in theology from St. Michael’s College in Colchester, Vermont, and a Doctor of Ministry degree from Barry University in Miami Shores, Florida. Sister Karen has served as a faculty presenter on Sacred Scripture in the Lay Ministry Formation Program and a homiletics assessor for the Permanent Diaconate Program in the Diocese of Toledo. She is the author of the book Women in Ministry and the Writings of Paul, published in 2010 by Anselm Academic.

She has led numerous retreats and has taught a variety of adult education classes on the Scriptures throughout the United States, Canada and India. She’s eager to meet the students and to share stories of her adventures around the world, including her time as an NCAA Division I athlete in three sports (volleyball, basketball and softball) during her years as an undergraduate at Wright State.

Sister Karen has a strong commitment to the ministry of Catholic higher education and a passion for service learning. “I am so impressed with the Mount’s mission and its focus on respect for all persons and service to others. The Mount’s stewardship of the Sisters of Charity mission is both inspiring and exciting,” she said.