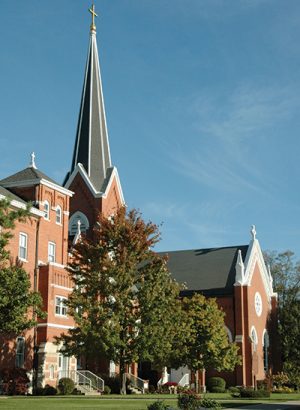 Since 1846, the Maria Stein Shrine has served a variety of roles: as a motherhouse for the Sisters of the Precious Blood; a working farm; a home for orphaned children; and a place of local enterprise, where altar breads were made by hand and sold to parishes locally and across the country.

The Shrine’s role in the community has evolved over time, but it will remain a place of “peace, prayer and hospitality” as responsibility for the Shrine is transferred from the Congregation to a 501(c)(3) nonprofit corporation.

“This is a bittersweet time,” said Sister Joyce Lehman, President of the Congregation. “We’re giving up something that has been with us since our beginnings in the United States. But it’s good in the sense that we’ve spent more than six years putting it in good hands.”

The nonprofit corporation Maria Stein Shrine of the Holy Relics was established in 2010. At that time, the five Sisters serving as the Congregation’s Councilors also served as board of directors for the newly formed nonprofit. The board changed and grew over time; it is now composed of eight laypeople and Sisters Nancy Kinross, Joyce Lehman, Linda Pleiman and Florence Seifert. New members are approved by the current board and serve three-year terms. Six committees — mission and spirituality, finance, investment, fund development, compensation, and nomination and governance — are composed of both board members and non-board members.

“The whole purpose of setting up the board and the involvement of the laity was the best way we could conceive of the mission of the Shrine continuing — and because we felt that the opportunity for evangelization at the Shrine was one needed in the world today,” Sister Joyce said. “I’ve been really impressed and edified by the board and their commitment to the Shrine. They really want it to succeed, want it to stay there, want it to be there for the people.”

Minster resident Orval Homan now serves as chair of the board, providing leadership in corporate governance and assisting with the management of the nonprofit. “I would like to see the Shrine be a resource to help nourish the faith of people of all ages by providing programs on a variety of religious topics, by having prayer services for special needs, and by creating awareness of modern-day saints such as Padre Pio, Mother Teresa, Pope John Paul II and others so that we realize that saints didn’t just live centuries ago,” Homan said. “With the laity taking responsibility for managing the Maria Stein Shrine of the Holy Relics, we will need the support of many people who are willing to donate their time and/or money if we are to be successful.”

The Congregation and the nonprofit board of directors have also undertaken a series of steps to fulfill various requirements under canon law to establish the Shrine as a separate entity. As part of that process, the archdiocese has appointed a rector: Father John Tonkin, who serves as pastor of St. Christopher Catholic Church in Vandalia. Father John said the Shrine is a special place for him personally, as he prayed there “for clarity, peace and courage to follow God’s will” when he first felt a calling to the priesthood.

“A person doesn’t have to travel to the Holy Land or the Vatican to go on pilgrimage. A visit to any Christian holy site is a pilgrimage when we open ourselves to encounter with Divine Presence. And that Divine Presence is especially prevalent at the Shrine through the witness of enduring prayer from the earliest days of the Sisters right down through the years to those who come to the Shrine today,” Father John said. “I believe one of my missions as rector is to spread the word about the Shrine as a place of hospitality, prayer, peace and pilgrimage. My hope is that more people will learn of the Shrine and come to experience a deepening of their faith in relationship with God and neighbor.”

In the months ahead, the deed for the building and the property will be transferred to the nonprofit corporation. Finally, the board will seek permission from the Holy See for transfer of the stewardship of the Shrine’s holy relics from the Sisters to the Shrine board.

– Story and photo by Mary Knapke