Kneipp Springs – Wellness in the Water

From 1901 to 1976, the Sisters of the Precious Blood owned and operated Kneipp Springs, a health resort and spa with natural mineral springs outside of Rome City, Indiana, about 40 miles northwest of Fort Wayne. Kneipp Springs, called Kneipp Sanatorium, Kneipp Sanitarium, and Kneipp Springs Health Spa throughout its history, was a destination for those seeking the “Kneipp Cure.” Developed by Dr. Sebastian Kneipp, a priest and philosopher living in Bavaria in the late 1880s, the Kneipp Cure sought to prevent or cure illnesses by bringing together mind, body and spirituality through hydrotherapy (water treatments such as hot and cold compresses, bathing in natural springs, etc.) and emphasis on natural foods, exercise and the use of herbal teas.

At its height, Kneipp Springs had over 20 buildings (including the main spa building, physical plant, farm buildings and residences for employees) and its own water tank visible from the highway. It was a working farm with orchards of fruit trees, dairy cows, cattle and hogs. A large garden supplied the herbs necessary for the herbal teas. They had over 1,500 visitors a year for decades. But how did it all begin?

How the Ministry Began

From the beginning of the Community in 1834, the Sisters of the Precious Blood prioritized above all else the adoration of the Blessed Sacrament. They also emphasized the care of the poor and of the sick. Their first Rule from 1835 states that the “Sisters endeavor especially to help the sick and disconsolate, to visit them, to console them, and in case they are poor, provide for the necessities remembering that what they do for the poor, they do for Jesus Himself.”

In this tradition, the Sisters visited Kneipp Springs in 1901 after contact with the owner, Dr. Geiermann. He was ready to sell the 80-acre property (already operating as a Kneipp Cure facility) after it had become too much for him to handle on his own. The Sisters were familiar with the Kneipp Cure and “kneipping” as two of them had visited the original site of Dr. Sebastian Kneipp’s practice in Bad Wörishofen, Germany, in 1895. Sister Margaret Schlachter (the first superior of Kneipp Springs) and Mother Ludovica Scharf (the Mother General at the time) took the treatments and learned the techniques of the Kneipp Cure directly from the experts.

Because of this knowledge and because of the promise of the ministry, the Sisters began researching the purchase of Kneipp Springs. A letter from then Mother General Mother Emma Nunlist to the Archbishop of Cincinnati on December 7, 1901, outlined the reasons for purchasing the Sanitarium:

“Intended use of the Sanitarium:
1) To establish as soon as convenient a House of Perpetual Adoration in honor of the Mother of Mercy, in lieu of Himmelgarten Convent [near St. Henry, Ohio], which was sold.

2) To establish an [orphanage] for poor, sick children in the time to come and afford them a home and a Christian education.

3) To possess a sanitary resort for infirm Sisters of ours wherein to recruit their impaired health.

4) On account of its mineral springs and established patronage to continue the sanitarium for the relief of suffering humanity and thereby practice charity.”

The archbishop gave his permission for the purchase, and the Sisters signed the deed on December 11, 1901.

The Sisters of Kneipp Springs

This unique ministry encompassed the talents of Sisters who were nurses, dining room attendants, hostesses, sacristans, dietitians, tea specialists, librarians, registrars, administrators and many, many other specialties. The life of a Sister at Kneipp Springs was not easy; they were on their feet for up to 12 hours a day and continued to keep night hours of adoration in front of the Blessed Sacrament in their chapel until the early 1960s. The Sisters also kept up their traditions for feast days, including a procession to the Kneipp Springs Grotto every year for the Feasts of Corpus Christi and the Assumption; they also had annual retreats each year conducted by either their chaplain or a visiting priest. Until the 1940s, retreats were offered in both German and English.

Another unique challenge for the Sisters was their location and its proximity to the nearby railroad station and, later, the highway. In 1936, the state of Indiana rerouted a section of highway that ran straight through the Kneipp Springs grounds. The Sisters were compensated, but they had to make many sacrifices, including moving their cemetery, consecrated in 1914, to a new location.

During the almost 75 years of Kneipp Springs’ existence, the Mothers General of the Congregation had to make difficult decisions for the welfare of the institution. For example, Mother Aquinas Stadtherr had to make quick changes to keep up to date with state regulations between 1954 and 1966. Many of the components of the physical plant were aging and had to be replaced; many buildings also had to be renovated. In 1955, Kneipp Springs received a grant from the Ford Foundation as part of its effort to give to private hospitals and health facilities which helped to offset some of the costs of the renovations. Also, during these years, many Sisters received degrees in nursing as RNs or LPNs from local colleges and universities, as well as degrees in dietetics. By March 1966 Kneipp Springs became a licensed comprehensive nursing unit.

Young aspirants, candidates and postulants from the Congregation made special visits during their summer breaks to help with the workload during the 1950s and 1960s. They picked apples, assisted with preparing the herbal teas, helped to prepare meals and many other tasks. All the while they also attended summer classes.

The Sisters at Kneipp Springs also experienced what the rest of the Congregation experienced. Beginning in the late 1930s, many Sisters who were born in Germany were naturalized as American citizens due to the growing intensity of anti-German sentiment before and during World War II. In 1955, the Sisters switched from the black to the gray habit; a Sister from Dayton traveled to Kneipp Springs with all of the gray habits in tow to take measurements, and a group of Sisters made the necessary alterations. And in the late 1960s, they remodeled their chapels to reflect the liturgical changes of Vatican II.

The Employees of Kneipp Springs

The Sisters employed laypeople for work at Kneipp Springs since its inception. The employees worked as nurses, farmhands, gardeners, plumbers, contractors, doctors, housekeepers and much more. Three women — Mary Kolb, Eva Wunderle and Lena Weber — were a fixture at the Springs. Mary and Eva were briefly members of the Congregation after their immigration from Germany, but had to give up their membership due to health reasons. They stayed with the Sisters and, along with Lena, provided decades of service to the patients and visitors. They all died at Kneipp Springs and were buried in the Sisters’ cemetery there. Several other employees were also buried there over the years.

Beginning during the Korean War in the 1950s and through the end of the Vietnam War in the 1970s, Kneipp Springs was also a place where conscientious objectors found work. According to stipulations from the Selective Service draft regulations, these men were required to complete two years of work at a civilian institution. Because of the stigma surrounding conscientious objection, many of the men were turned away from other job opportunities; the Sisters took them on and were grateful for the extra help.

In 1971, the Sisters offered employees a pension plan. The first retiree under the pension plan was John Hastreiter, a lawn maintenance worker. He had taken the treatments years before, and, because he could not pay at the time, he asked if he could compensate by working. He said, “I have never been out of work since,” and worked at Kneipp Springs for 44 years.

The Visitors of Kneipp Springs

Patients at Kneipp Springs who were there for medical treatment usually stayed on the grounds in the large spa building or in several available outbuildings. Some patients were there for a month; others were there for years, even decades. Many of these patients were suffering from long-term physical or mental illnesses. Priests and bishops were frequent patients; they took the treatments to have a respite from the rigors of their daily duties. Members of the Sisters of the Precious Blood and many other congregations also took the treatments.

Many visitors came for Mass at the Mother of Mercy Chapel, the main chapel at Kneipp Springs. This chapel was the closest one available for many residents of the surrounding area of Noble County for many years. Local priests or the Kneipp Springs chaplain celebrated marriages, First Communions, confirmations and funerals there for the community. In 1957, due in part to the number of people attending Mother of Mercy Chapel, ground was broken for a new parish in Rome City, called St. Gaspar Parish. The Sisters attended the parish’s dedication in December 1957 and many became active members.

A Ministry Closed, a Legacy Forged

By the 1970s, after a very successful period, Kneipp Springs began to decline in profits. Visitors to a health spa of this type became fewer due to societal factors. Also, state regulations again changed and would force the Sisters to upgrade their buildings once more. Finally, fewer Sisters were available to minister in the specialized jobs at the Springs. It had become time to close the institution after 75 years.

On November 18, 1976, the Sisters sold Kneipp Springs to Theodore Leinsinger from Fort Wayne, Indiana. The property changed hands several times over the decades. In 2018 it was listed on the National Register of Historic Places as the Kneipp Springs Historic District which will help the site to be preserved for many years to come.

Mother Maria Anna Brunner, the foundress of the Sisters of the Precious Blood, sought to adore the Blessed Sacrament, to care for the poor and sick, and to spread Precious Blood Spirituality as far as it could go. In her spirit, the Sisters ministered to thousands of people over 75 years at Kneipp Springs. Today, we can remember Kneipp Springs as a vital part of the Congregation’s commitment to helping where they are needed, especially during these difficult times of the pandemic. Every time they administered a cold compress, prepared a meal, picked an apple, balanced the books or adored the Blessed Sacrament in Mother of Mercy Chapel, the Sisters of the Precious Blood were living out the legacy of Mother Brunner. 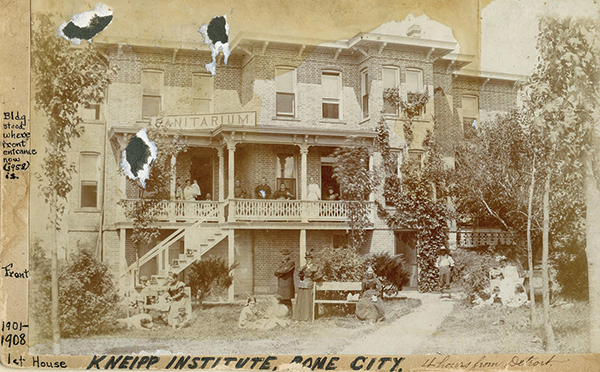 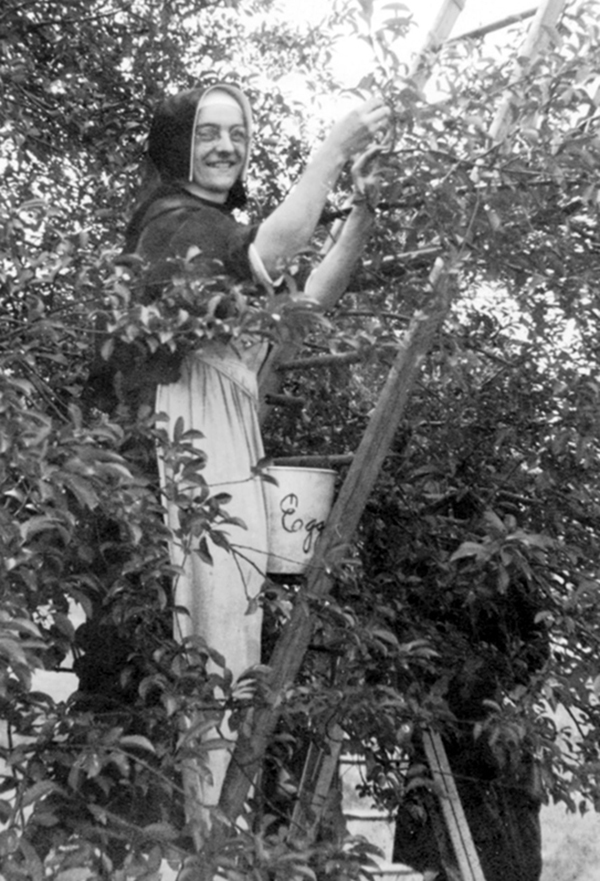 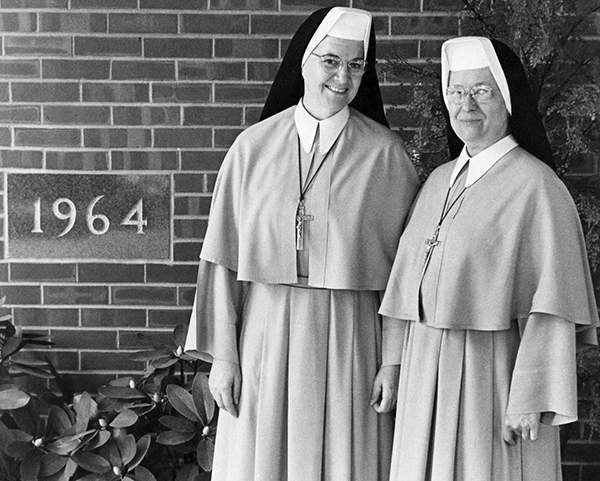 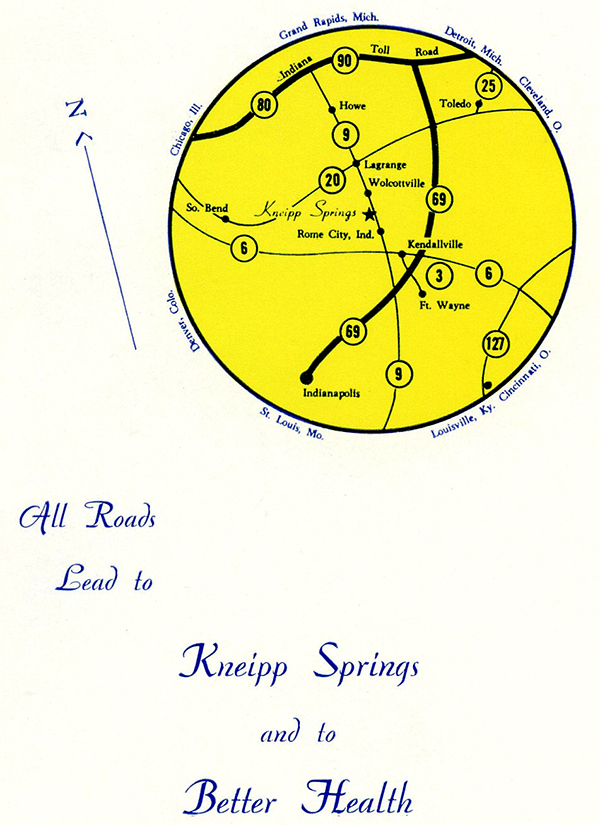 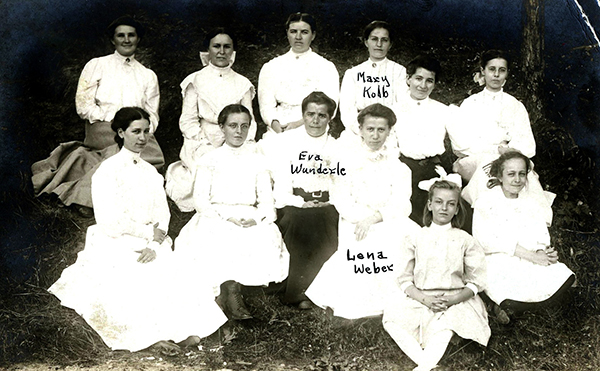 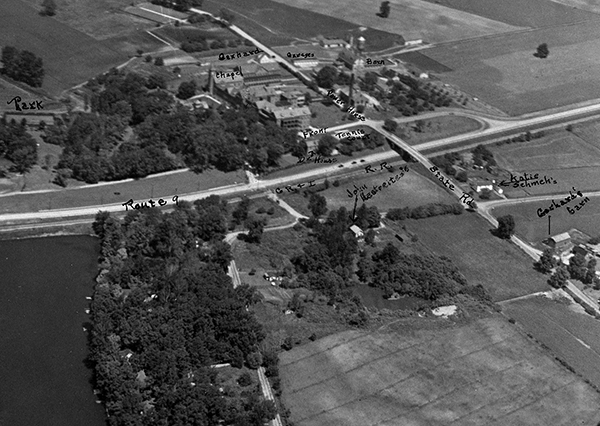 On the cover, view of Kneipp Springs water tower. Top, the first building of Kneipp Springs which was torn down in 1908 to build a newer and better equipped building. The sign “Sanitarium” is visible on the second story balcony overhang. Second, Sister Mary Anthony Spacek picking cherries in the Kneipp Springs orchard, July 1946. Third, Sisters Beatrice Marie [Mary Elizabeth] Hafer Mary and Marcella Hinders standing in front of one of the buildings erected during a renovation to attract new visitors in 1964. Kneipp Springs became known as the “Florida of the North.” Fourth, cover of pamphlet made for celebration of Golden Jubilee, 1967. Fifth, employees of Kneipp Springs. Mary Kolb, Eva Wunderle and Lena Weber, three longtime employees, are identified. Ca. 1910. Bottom, aerial view of Kneipp Springs taken after 1936 highway work was completed.